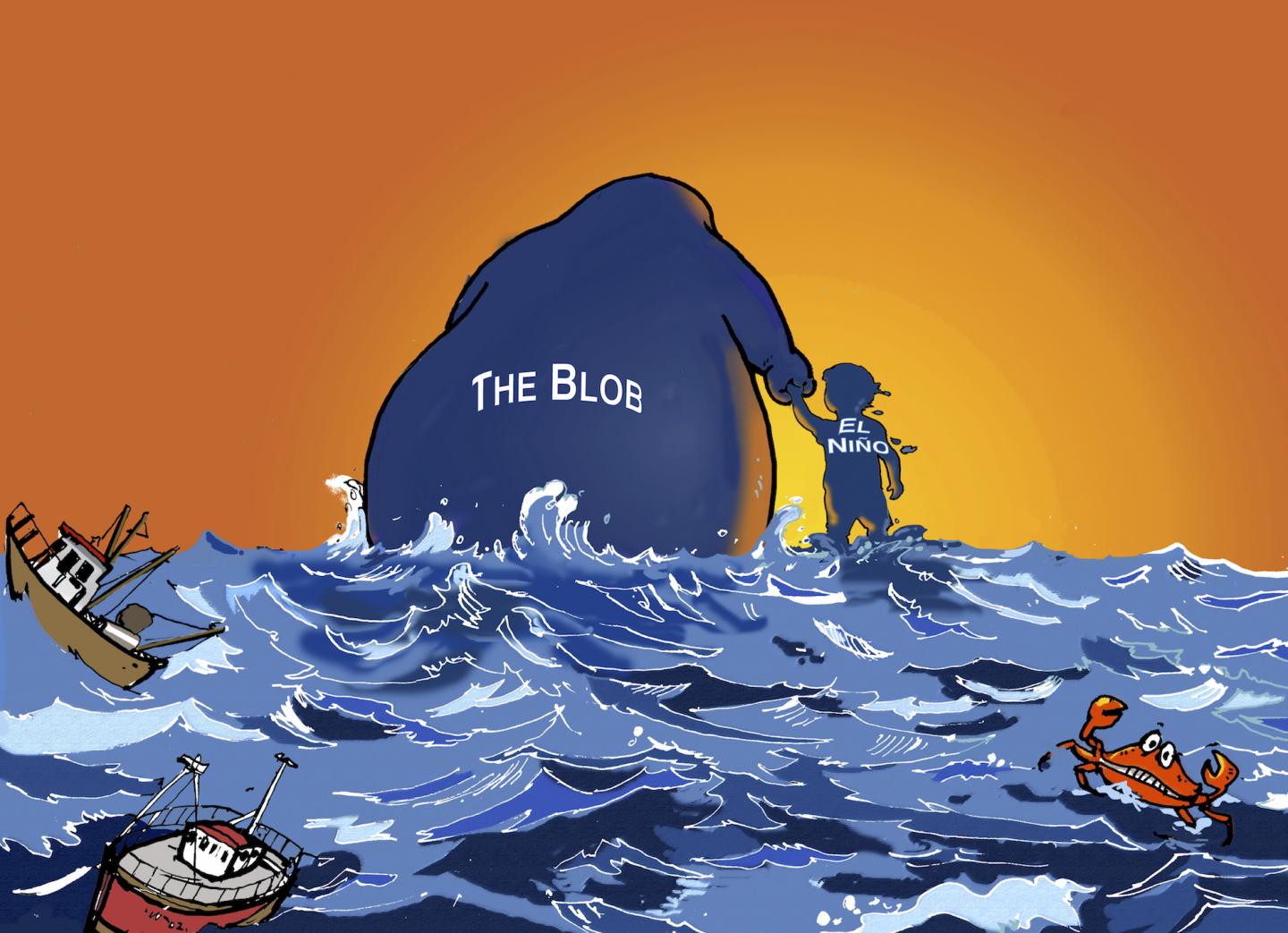 ‘The Blob’ and El Niño are on their way out, leaving a disrupted marine ecosystem behind. Source: Michael Jacox

El Niño exerted powerful effects around the globe in the last year, eroding California beaches; driving drought in northern South America, Africa and Asia; and bringing record rain to the U.S. Pacific Northwest and southern South America. In the Pacific Ocean off the West Coast, however, the California Current Ecosystem was already unsettled by an unusual pattern of warming popularly known as “The Blob.”

New research based on ocean models and near real-time data from autonomous gliders indicates that the “The Blob” and El Niño together strongly depressed productivity off the West Coast, with The Blob driving most of the impact.

The research published in the journal Geophysical Research Letters by scientists from NOAA Fisheries, Scripps Institution of Oceanography and University of California, Santa Cruz is among the first to assess the marine effects of the 2015-2016 El Niño off the West Coast of the United States.

“Last year there was a lot of speculation about the consequences of ‘The Blob’ and El Niño battling it out off the U.S. West Coast,” said lead author Michael Jacox, of UC Santa Cruz and NOAA Fisheries’ Southwest Fisheries Science Center. “We found that off California El Niño turned out to be much weaker than expected, The Blob continued to be a dominant force, and the two of them together had strongly negative impacts on marine productivity.”

“Now, both The Blob and El Niño are on their way out, but in their wake lies a heavily disrupted ecosystem,” Jacox said.

Unusually warm ocean temperatures that took on the name, The Blob, began affecting waters off the West Coast in late 2013. Warm conditions – whether driven by the Blob or El Niño – slow the flow of nutrients from the deep ocean, reducing the productivity of coastal ecosystems. Temperatures close to 3 degrees C (5 degrees F) above average also led to sightings of warm-water species far to the north of their typical range and likely contributed to the largest harmful algal bloom ever recorded on the West Coast last year.

“These past years have been extremely unusual off the California coast, with humpback whales closer to shore, pelagic red crabs washing up on the beaches of central California, and sportfish in higher numbers in southern California,” said Elliott Hazen of the Southwest Fisheries Science Center, a coauthor of the paper. “This paper reveals how broad scale warming influences the biology directly off our shores.”

The research paper describes real-time monitoring of the California Current Ecosystem with the latest technology, including autonomous gliders that track undersea conditions along the West Coast. “This work reflects technological advances that now let us rapidly assess the effects of major climate disruptions and project their impacts on the ecosystem,” Jacox said.

Separate but related research recently published in Scientific Reports identifies the optimal conditions for productivity in the California Current off the West Coast, which will help assess the future effects of climate change or climate variability such as El Niño. The research was authored by the same scientists at UC Santa Cruz and NOAA Fisheries.

“Wind has a ‘goldilocks effect’ on productivity in the California Current,” Hazen said. “If wind is too weak, nutrients limit productivity, and if wind is too strong, productivity is moved offshore or lost to the deep ocean. Understanding how wind and nutrients drive productivity provides context for events like the Blob and El Niño, so we can better understand how the ecosystem is likely to respond.”

Both papers emphasize the importance of closely monitoring West Coast marine ecosystems for the impacts of a changing climate. Although the tropical signals of El Niño were strong, the drivers – called “teleconnections” – that usually carry the El Niño pattern from the tropics to the West Coast were not as effective as in previous strong El Niños.

“Not all El Niños evolve in the same way in the tropics, nor are their impacts the same off our coast,” said Steven Bograd, a research scientist at the Southwest Fisheries Science Center and coauthor of both papers. “Local conditions, in this case from the Blob, can modulate the way our ecosystem responds to these large scale climate events.”