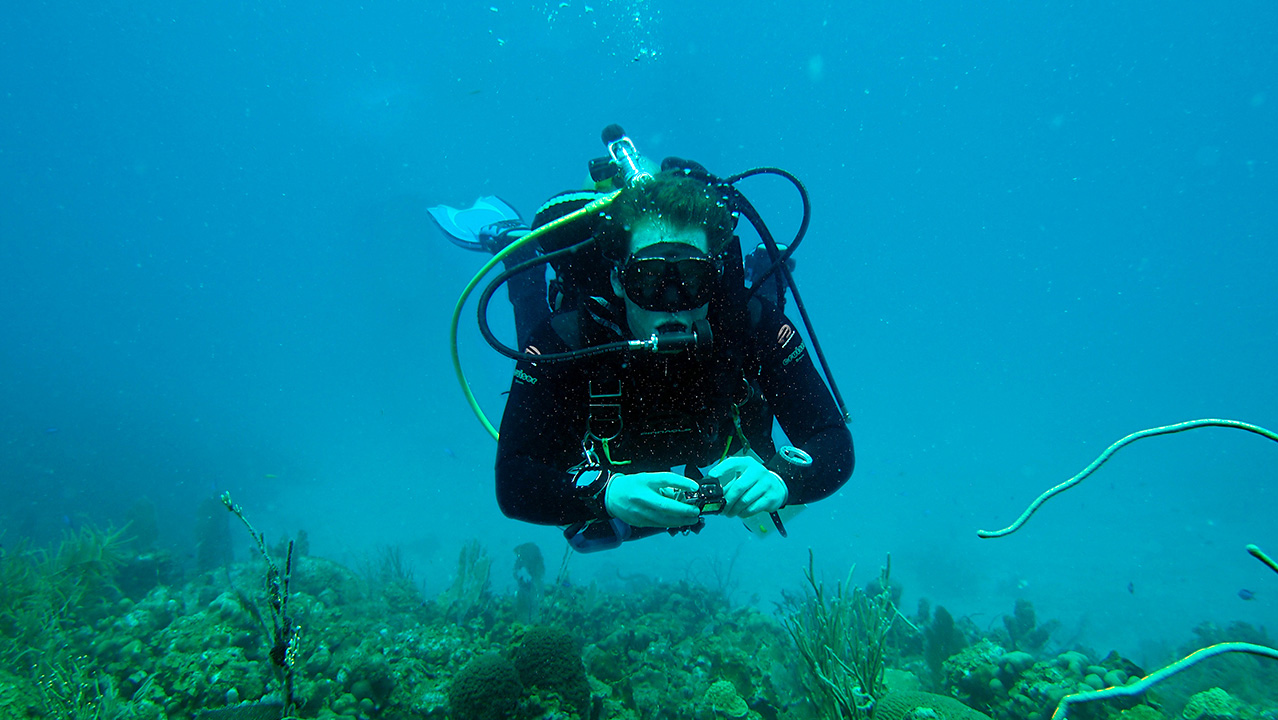 A new study from the Woods Hole Oceanographic Institution (WHOI) will help researchers understand the ways that marine animal larvae use sound as a cue to settle on coral reefs. The study, published on August 23rd in the online journal Scientific Reports, has determined that sounds created by adult fish and invertebrates may not travel far enough for larvae —which hatch in open ocean—to hear them, meaning that the larvae might rely on other means to home in on a reef system.

“To keep a reef healthy, you need a constant supply of new larvae to repopulate animals that die off,” said Max Kaplan, the lead author of the paper and a graduate student in the MIT/WHOI Joint Program in Oceanography. “How larvae find reefs has been a big question, though. We think sound may play a role in attracting them, but exactly how far away they can sense those sounds has not yet been accurately measured.”

To address that problem, Kaplan and his PhD adviser, WHOI Associate Scientist Aran Mooney, a co-author on the paper, traveled to the Hawaiian island of Maui to make painstaking acoustic measurements of a healthy reef system. The pair focused their efforts on recording two different components of sound—pressure waves (the element of sound that pushes on a human eardrum), and particle motion (the physical vibration of the water column as a sound wave travels through it). The latter, Kaplan explained, is how the majority of fish and marine species detect sound, yet no previous studies have focused on recording it.

“Think of it like being at a loud concert—if you’re standing next to a huge speaker, you effectively feel the sound as it vibrates your skin,” Kaplan said. “Fish and invertebrates sense sound in a similar way.” Species like squid, octopus, and shrimp, for example, can detect vibrations through nerves embedded in their flesh. Similarly, adult fish sense them through the motion of tiny bone-like structures called otoliths inside their skulls.

Although researchers in the past have detected reef sounds from many kilometers away, Kaplan says that most of those studies rely on a hydrophone, an underwater microphone, which can only detect pressure waves. In their Maui study, however, the researchers recorded particle motion as well, using a sensitive accelerometer alongside a hydrophone. The data the accelerometer provides is directly relevant to how marine organisms sense sound, said Mooney.

Using an accelerometer to measure that motion, however, comes with a few challenges, said David Mann, President of Loggerhead Instruments, which designs small accelerometers for marine research. “To sense particle motion, an accelerometer has to be able to move along with the water as the sound passes by. It can’t be mounted rigidly on frame or on the bottom, but it also can’t be allowed to drift loosely with the currents. It’s a lot harder to use than a hydrophone.”

Kaplan worked with Canadian company GeoSpectrum Technologies to fine-tune existing accelerometers for use in the study, then deployed them at multiple sites around the reef. Over three days, he and Mooney measured sound levels at dawn and mid-morning, placing the sensors at distances ranging from zero to 1500 meters away from the reef itself.

In doing so, the pair found that particle motion was much lower than expected, dropping rapidly below levels that most marine species can sense—even just a few meters away from the reef.

”It’s possible that larvae are still able to use chemical signals from other animals to locate the reef, or maybe can read the currents to move towards shore,” Kaplan said, “but based on this data, it seems unlikely that they’d be able to use sound to find the reef. That was a surprise to us.”

Once larvae do locate a reef, Kaplan thinks sound may play an important role in finding a suitable location to settle down. Many species living on reef systems are extremely localized, he notes. For example, some damselfish species live their entire adult lives within one square meter, so finding the best possible location is key to their survival. “In cases like that, sensing sound on order of meters would make a big difference,” Kaplan said. “If you hear sounds of your species instead of predators, you might be more inclined to settle in a specific spot.”

The researchers’s findings might also be useful for reef conservation efforts. Past studies have shown that larvae are attracted to reef sounds when played through an underwater loudspeaker, so Kaplan thinks that playing back recorded biological sounds at high volumes could be used to steer larvae to damaged reef areas.

“You’d have to boost sound levels by quite a bit to get the response you want, but it could be one solution,” said Kaplan. “If we can figure out the hearing threshold of each species’ ability to sense particle motion, we might be able to amplify that motion to make it audible to them at a distance.”

Kaplan notes that the Maui study only covers one shallow reef, so further study is needed to gain a full understanding of how sound propagates from other types of reef systems. “Recording particle motion in the field hasn’t really been done before,” said Kaplan, “but now that we’ve worked out these methods, we can start to expand our work.”