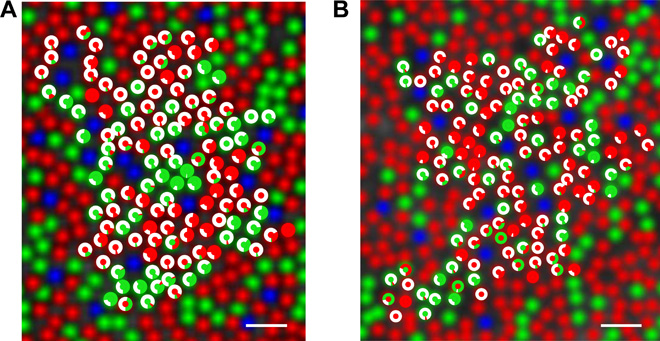 A small team of researchers from the University of California and the University of Washington has found that not all of the color-sensing cells in the back of the eyeball actually help us to see color. Instead, as they note in their paper published in the journal Science Advances, some of them sense only white light.

A lot of research has gone into studying how the eye works, both in humans and in other animals, and researchers have learned much about the complicated anatomy that allows us to perceive the world in a rich array of colors and shapes. But until now, it has not been possible to study the activity of rods and cones (light sensing cells) in real-time in human volunteers. In this new effort, the researchers have overcome that challenge, and in so doing, have discovered something completely new about cone behavior.

To gain a better understanding of the role that cones play in helping us interpret colors, the researchers asked two volunteers to sit still while their eyes were examined by an eye-tracking device based on the same telescope technology that allows astronomers to observe moving stars—called adaptive optics, it keeps the focus of a beam of light on a single point—in this case, on a single cone in the back of the eye. This allowed the researchers to conduct a survey of 273 cones for each volunteer, shining a single beam of light onto each cone and then asking the volunteer what they saw. In so doing, the researchers were surprised to find that approximately two-thirds of the cones did not register a sense of color at all, but instead perceived only white light.

Cones come in three varieties, L, M and S, each is able to sense different colors. But the researchers found that for all three types, 77 percent registered as white light sensing. They also found that the cells remained stable over time by testing the same cones over a period of many months—they suggest the purpose of having so many white sensing cells is to help define lines, edges and other details of objects in the world around us.