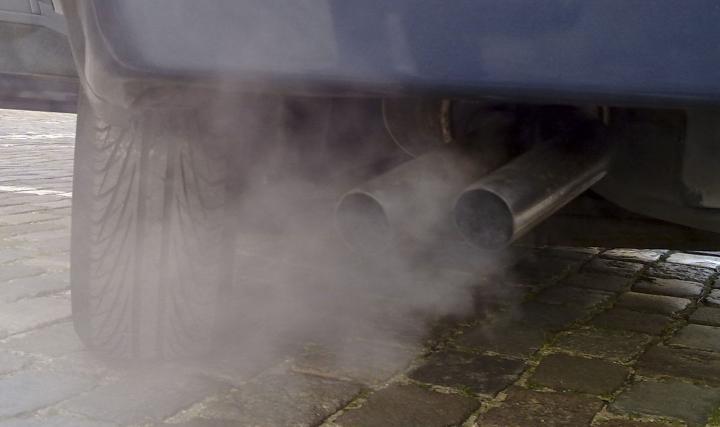 New nanomaterials may be able to turn waste heat into useable electricity for vehicles and other systems. Researchers from The University of Texas Permian Basin are using supercomputers at TACC to find optimal configurations of materials for the job. Credit: Ruben de Rijcke, Creative Commons

Do you feel the warmth coming off your computer or cell phone? That's wasted energy radiating from the device. With automobiles, it is estimated that 60% of fuel efficiency is lost due to waste heat. Is it possible to capture this energy and convert it into electricity?

Researchers working in the area of thermoelectric power generation say absolutely. But whether it can be done cost-effectively remains a question.

For now, thermoelectric generators are a rarity, used primarily in niche applications like space probes, where refueling is not a possibility. Thermoelectricity is an active area of research, particularly among automobile companies like BMW and Audi. However, to date, the cost of converting heat to electricity has proved to be more expensive than the electricity itself.

Anveeksh Koneru, a senior lecturer in mechanical engineering at The University of Texas Permian Basin (UTPB), is exploring a new method for capturing waste heat by harnessing the quantum mechanical motions of electrons in spin polarized materials.

In particle physics, spin is an intrinsic form of angular momentum carried by elementary particles, composite particles (hadrons), and atomic nuclei. Through a mechanism known as the Spin Hall effect, it has been shown that a voltage can be generated by harnessing differences in spin populations on a metal contact attached on a ferromagnetic material. First experimentally demonstrated by Japanese researchers in 2008, the idea has percolated through materials science for a while but has yet to find its optimal form.

Koneru believes that, in cobalt oxide, he may have found the right material to harness the effect for energy production. An inorganic compound used in the ceramics industry to create blue colored glazes, and in water separation technologies, cobalt oxides possess the unique ability to accept substitute transition metal cations, which allows them to be mixed with nickel, copper, manganese, or zinc. These metals have magnetic properties that can increase the separation between electrons spinning up and down and improve the conversion of heat to electricity.

"The material should be a good electrical conductor, but a bad thermal conductor. It should conduct electrons, but not phonons, which are heat," Koneru said. "To study this experimentally, we'd have to fabricate thousands of different combinations of materials. Instead, we're trying to theoretically calculate what the optimal configuration of the material using substitutions is."

Since 2018, Koneru has been using supercomputers at the Texas Advanced Computing Center (TACC) to virtually test the energy profiles of a variety of cobalt oxides with a range of substitutions.

"Each calibration takes 30 to 40 hours of computing time, and we have to study at least a 1,000 to 1,500 different configurations," he explained. "It requires a huge computational facility and that's what TACC provides."

Koneru, along with UTPB graduate students Gustavo Damis Resende, Nolan Hines, and a collaborator from West Virginia University, Terence Musho, presented their initial findings on the thermoelectric capacity of cobalt oxides at the Materials Research Society Spring Meeting in Phoenix, Arizona, on April 22.

The researchers studied 56-atom unit cells of three configurations of cobalt oxide, tuned by substitutions of nickel and zinc, to attain optimal thermoelectric performance. They used a software package known as Quantum ESPRESSO to calculate physical characteristics for each configuration. These include:

- the band gap: the minimum energy required to excite an electron to a state where it conducts energy; the lattice parameter: the physical dimensions of cells in a crystal lattice;

- the effective mass of conduction electrons: the mass that a particle seems to have when responding to force;

- and the spin polarization: the degree to which the spin is aligned with a given direction.

These fundamental properties were then used to perform conventional charge and spin transport calculations, which tells the researchers how well a configuration of the cobalt oxide can turn heat into electricity.

According to the researchers, the method developed in this research can be applied to other interesting thermoelectric materials with semiconducting and magnetic properties, making it broadly useful for the materials science community.

As a PhD student at West Virginia University, Koneru had access to large supercomputers to conduct his research. Although UTPB does not have such resources locally, he was able to tap into the advanced computing systems and services of TACC through the UT Research Cyberinfrastructure (UTRC) initiative, which, since 2007, has provided researchers at any of the University of Texas System's 14 institutions access to TACC's resources, expertise, and training.

As part of the UTRC initiative, TACC staff serve as liaisons, visiting UT System's 14 campuses, offering training and consultation, and introducing researchers the resources available to them. When TACC researcher Ari Kahn visited UTPB, he met Koneru and encouraged him to compute at TACC.

Since then, Koneru has been using Lonestar5, a system exclusively for UT System researchers, for his work. Though still in their early stage, the results so far have been promising.

"I'm excited because we could clearly see spin polarization when cobalt oxide spinels were substituted with nickel. That's a good sign," he said. "We're seeing that one particular configuration has a higher split in band-gap, something that's surprising and we have to explore further. And all the calibrations are converging, which shows they're reliable."

Once he identifies the optimal material for waste heat conversion, Koneru hopes to engineer a paste that could be applied to the tailpipe of a vehicle, converting waste heat into electricity to power a car's electrical systems. He estimates that such a device could cost less than $500 per vehicle and could reduce greenhouse gas emissions by hundreds of millions of tons annually.

"With the recent advances in nanofabrication, and computational calibrations for nanomaterials, spin-thermal materials can play a vital role in energy conversion in the future," he said.

TACC enables Koneru to speed through a large number of possible material configurations so that when it is time to test them experimentally, the number of candidates will be manageable.

"TACC is such a highly useful system with personnel that can guide you if any problems arise," Koneru said. "If faculty or students are interested in research that requires computational facilities, TACC is the right option to choose. It provides resources and expertise for free. It's a great enabler for whatever you're passionate about. "

"It's our mission to encourage researchers all across the State to use TACC resources to make amazing discoveries that cannot be made in the lab or using local clusters," said TACC's Ari Khan. "Dr. Koneru's research is a great example of such a project that could have a major impact on air pollution and global warming."