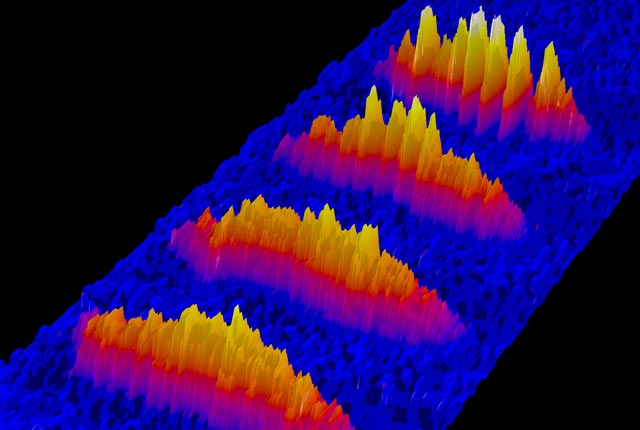 The orange and yellow stripes in this composite image depict matter waves from different experimental runs in the Hulet Lab at Rice University. The stripes show how matter waves change due to rapid magnetic shifts that bring about modulational instability. The left line shows a matter wave before magnetic switching. Subsequent images (to left) show how both repulsive to attractive fluctuations become amplified in the wave. Clear signs of deviations from the initial solid shape can be seen in the third image, and the peaks and valleys in the far left image show how the wave morphs into a “soliton train,” a set of standing waves. (Image courtesy of J. Nguyen/Rice University)

By precisely controlling the quantum behavior of an ultracold atomic gas, Rice University physicists have created a model system for studying the wave phenomenon that may bring about rogue waves in Earth’s oceans.

The research appears this week in Science. The researchers said their experimental system could provide clues about the underlying physics of rogue waves — 100-foot walls of water that are the stuff of sailing lore but were only confirmed scientifically within the past two decades. Recent research has found rogue waves, which can severely damage and sink even the largest ships, may be more common than previously believed.

“We are interested in how self-attracting waves develop,” said lead scientist Randy Hulet, Rice’s Fayez Sarofim Professor of Physics and Astronomy. “Although our experiment is in the quantum domain, the same physics applies to classical waves, including rogue water waves.”

Hulet’s lab uses lasers and magnetic traps to cool tiny clouds of an atomic gas to less than one-millionth of a degree above absolute zero, temperatures far colder than the deepest reaches of outer space. At this extreme, quantum mechanical effects take center stage. Atoms can be made to march in lockstep, momentarily vanish or pair up like electrons in superconductors. In 2002, Hulet’s team created the first “soliton trains” in ultracold atomic matter. Solitons do not diminish, spread out or change shape as they move. In 2014, Hulet and colleagues showed that two matter wave solitons traveling in opposite directions in a trap would briefly wink out of existence rather than share space as they passed through one another.

Both the 2002 and 2014 findings were remarkably similar to the behavior observed in water wave solitons in a canal in the mid-19th century by Scottish engineer John Scott Russell. He never lost his fascination with solitons and built a model canal in the garden behind his house to study them. For example, he was the first to show that two of the waves moving in opposite directions would pass through one another without interaction.

Mathematically, solitons are the result of a nonlinear attraction, one where the inputs have a disproportionate effect on the output. And any wave-based nonlinear system — be it waves of water in the deep ocean or waves of ultracold atoms in a trap — is subject to this and other universal nonlinear effects.

In the latest experiments, Hulet, research scientist Jason Nguyen and graduate student De “Henry” Luo used repulsive interactions to create a cigar-shaped matter wave known as a Bose-Einstein condensate. By rapidly switching the interactions to be attractive, the researchers caused the gas to undergo a “modulational instability,” a nonlinear effect in which small, random perturbations in the system become amplified.

“The conditions pick out which perturbations are amplified,” said Nguyen, the lead author of the new paper. “When this happens, the Bose-Einstein condensate will divide into a train of individual solitons separated by discrete spaces.”

The resulting soliton train is what Hulet’s team first created in 2002, but Luo said the new study is the first to experimentally probe the underlying physics of the system to determine whether the structure of a soliton train derives from the starting conditions or evolves dynamically as the system reacts to those conditions. Nguyen, Luo and Hulet were able to answer this question by systematically varying the conditions in their experiments and taking snapshots of the soliton trains every two milliseconds throughout the experiment.

“What we found was that under certain conditions, the number of solitons remains unchanged,” Luo said. “This is evidence that the soliton train is born with the characteristics to be stable rather than evolving into such a stable structure over time.”

In more than one study over the past decade, physicists and mathematicians have tried to describe the behavior of rogue waves using mathematics that are similar to that used to describe quantum systems, and Hulet said ultracold atomic experiments provide an ideal platform to test new theories about rogue wave dynamics.

“Recreating the precise conditions that bring about a rogue soliton wave in the ocean is going to be difficult, even in a large wave tank,” Hulet said. “People are trying to do that, but we can gain insight into the formation of solitons by studying their formation in the quantum, rather than classical, regime.”