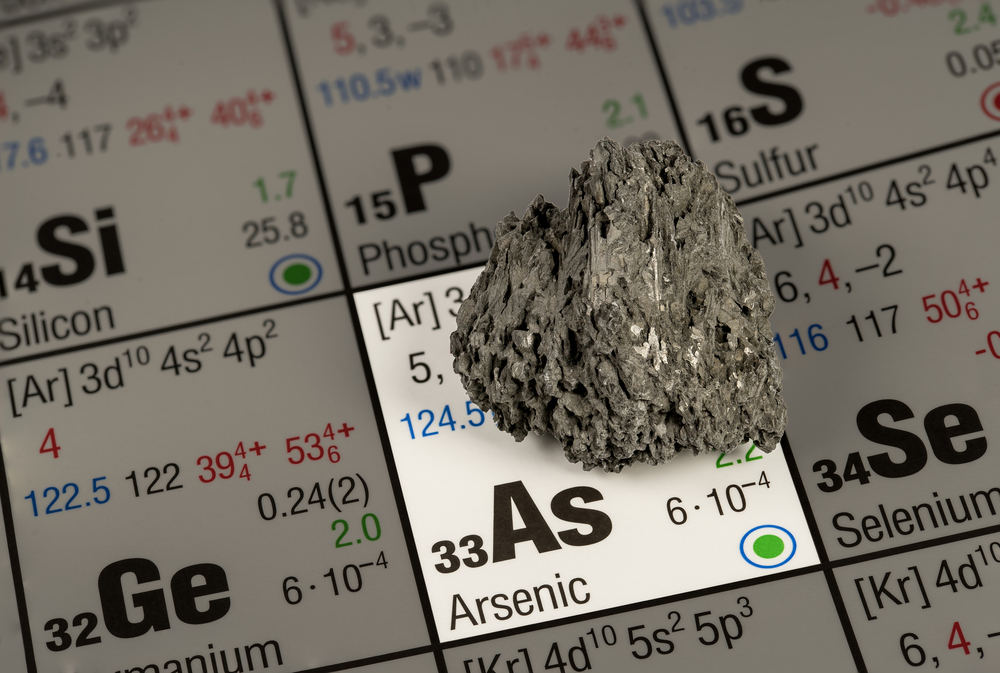 Arsenic-contaminated drinking water is a major health hazard, with chronic exposure causing illnesses and cancers. The World Health Organization estimates that in Bangladesh, for example, over 5 million people were exposed to arsenic-contaminated drinking water in 2009. Often, arsenic is released into water by microbes that breathe, or respire, arsenic-containing compounds. Caltech researchers have now determined the structure of the bacterial enzyme that enables arsenic respiration. The work is an important step towards predicting biological influences on arsenic mobilization in the environment.

The work was done in the laboratory of Dianne Newman, the Gordon M. Binder/Amgen Professor of Biology and Geobiology, the Allen V. C. Davis and Lenabelle Davis Leadership Chair of Caltech’s Center for Environmental Microbial Interactions, and executive officer for molecular biology.It appears in a paper in the August 13 issue of Proceedings of the National Academy of Sciences.

Among the toxic arsenic-containing compounds contaminating drinking water are arsenates. These compounds are commonly found associated with iron minerals in sedimentary environments. In this form, arsenates are not likely to dissolve into the groundwater that flows through these geological deposits. When bacteria in these environments run out of oxygen, they can enter into an anaerobic mode and turn to respiring arsenate. In doing so, the microbes change arsenate into arsenite, a similar compound which is much more soluble in water. Many different types of bacteria have this ability, key to which is a particular protein called the Arr enzyme complex.

An international team of researchers led by former Caltech graduate student Nathaniel Glasser (PhD ’17) has now determined the enzyme’s physical structure and the precise molecular locations where it chemically interacts with arsenate.

Proteins like the Arr complex are so small that they cannot be seen with an optical microscope. Thus, the Caltech team turned to a technique called X-ray diffraction to reveal the enzyme’s structure. Discovering exactly how this enzyme is structured is important for understanding its specific functions, particularly because there exist similar proteins that interact with arsenic compounds in different ways. Additionally, Glasser was able to examine the enzyme as produced by Shewanella bacteria—microbes that actually perform arsenate respiration in the environment—rather than in the organism commonly used in the laboratory for bacterial protein expression, Escherichia coli (E. coli). Though E. colican perform arsenate respiration and express the Arr enzyme complex, Shewanellacan produce much more active protein.

The reason arsenate is toxic to humans is because it is chemically similar to phosphate, a necessary compound for cells to make ATP, the energy currency of the cell. If there is too much arsenate present, the cell starts taking that up instead of phosphate, destroying the cell’s ability to make ATP. In this study, Glasser and his colleagues measured the Arr enzyme’s activity in the presence of different levels of phosphate.

“Contrary to what one might expect, phosphate likely stimulates arsenate respiration rather than inhibiting it in typical sedimentary environments in contact with groundwater. Knowing how quickly this enzyme works under environmentally-relevant conditions brings us a step closer to being able to predict how much bacteria may be mobilizing arsenic into drinking water in certain locales,” says Newman. “This research will not fix the crisis in Bangladesh, but having a better quantitative handle on what’s happening is useful in solving just about any problem, and particularly important when tackling a complex environmental problem where many factors are involved. This work provides helpful information about an enzyme that, as far as we know, is found in every bacterium that respires arsenate.”

The paper is titled “Structural and mechanistic analysis of the arsenate respiratory reductase provides insight into environmental arsenic transformations.” In addition to Glasser and Newman, other co-authors include Caltech staff scientist Paul Oyala, and Thomas Osborne and Joanne Santini of University College London. Funding was provided by the National Institutes of Health, the National Science Foundation, the U.S. Department of Energy, the Gordon and Betty Moore Foundation, the Beckman Institute, the Sanofi-aventis Bioengineering Research Program at the California Institute of Technology, the National Institute of General Medical Sciences, the Biotechnology and Biological Sciences Research Council, and the Dow Next Generation Educator Fund.