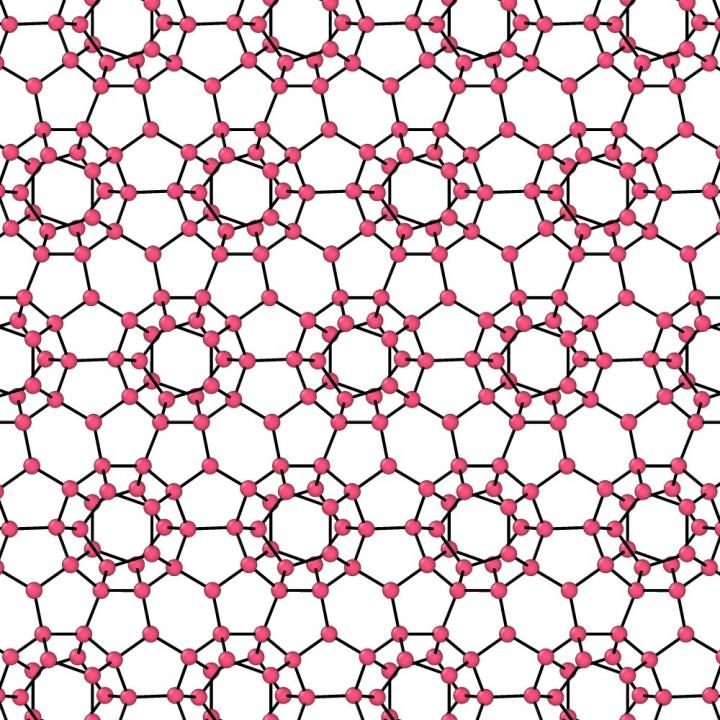 A clathrate ice, with oxygens represented as spheres, and hydrogen-bonds as lines. The work has shown how complex crystalline structures emerge as a result of water’s interactions.

The properties of water have fascinated scientists for centuries, but yet its unique behaviour remains a mystery.

Published this week in the journal Proceedings of the National Academy of Sciences of the United States of America, a collaboration between the Universities of Bristol and Tokyo has attempted a novel route to understand what makes a liquid behave like water.

When compared to an ordinary liquid, water displays a vast array of anomalies. Common examples include the fact that liquid water expands on cooling below 4 C, which is responsible for lakes freezing from the top rather than the bottom.

In addition, the fact that water becomes less viscous when compressed, or its unusually high surface tension, allows insects to walk on water’s surface.

These and many other anomalies are of fundamental importance in countless natural and technological processes, such as the Earth’s climate, and the possibility of life itself. From an anthropic viewpoint, it is like the water molecule was fine-tuned to have such unique properties.

Starting from the observation that the properties of water seem to appear fine-tuned, a collaboration between Dr John Russo from the University of Bristol’s School of Mathematics and Professor Hajime Tanaka from the University of Tokyo, harnessed the power of powerful supercomputers, using computational models to slowly “untune” water’s interactions.

This showed how the anomalous properties of water can be changed and eventually reduced to those of a simple liquid. For example, instead of floating on water, the density of ice can be changed continuously until it sinks, and the same can be done with all water anomalies.

Dr Russo said: “With this procedure, we have found that what makes water behave anomalously is the presence of a particular arrangement of the water’s molecules, such as the tetrahedral arrangement, where a water molecule is hydrogen-bonded to four molecules located on the vertices of a tetrahedron.

“Four of such tetrahedral arrangements can organise themselves in such a way that they share a common water molecule at the centre without overlapping.

“We think this work provides a simple explanation of the anomalies and highlights the exceptional nature of water, which makes it so special compared with any other substance.”