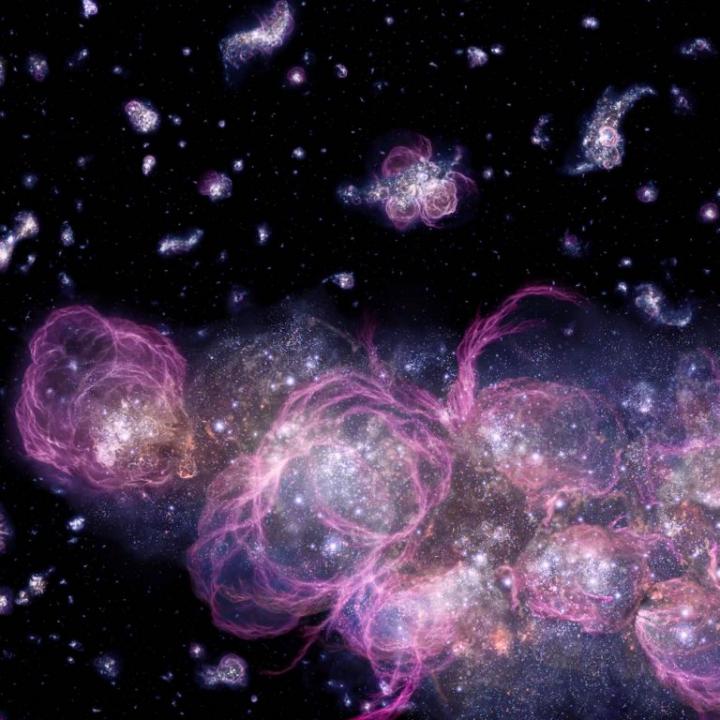 This is an artist’s view of star formation in the early universe. Source: Adolf Schaller/STScI

A new study led by University of California, Riverside astronomers casts light on how young, hot stars ionize oxygen in the early universe and the effects on the evolution of galaxies through time.

The study presents the first measurements of the changing strengths of oxygen emission lines from the present day and back to 12.5 billion years ago.

The cause of the two different evolutions is due to the changing physical conditions inside star-forming galaxies. The amount of ionizing energy inputted into the gas by newly formed stars is much higher in the early universe.

The results, recently published in the Monthly Notices of the Royal Astronomical Society, help set the framework for future surveys using next-generation telescopes, such as the upcoming James Webb Space Telescope, that will allow researchers to study the conditions inside star-forming galaxies to the era of the first galaxies.

A galaxy can be thought of as a factory that produces stars from cold gas, with some galaxies being more productive than others. Therefore, what roughly defines the evolutionary parameters of a galaxy is the rate of star formation, stellar mass, and gas content.

The rate at which stars form in galaxies has not always been the same. The typical star formation rate in galaxies rose for the first two to three billion years after the Big Bang and has steadily decreased for the past 10 to 11 billion years.

In other words, the universe is in a production crisis as galaxies are becoming less active in creating new stars. Because cold gas is the fuel of star formation, it is imperative to understand how the physical conditions of the gas are changing throughout the universe’s history.

“One way to study the conditions of gas in star-forming regions of galaxies is to observe the spectral emission lines,” said Ali Ahmad Khostovan, lead author of the paper and a graduate student in the Department of Physics and Astronomy at UC Riverside. “These lines are produced when light from bright, massive, short-lived stars interact with the surrounding medium resulting in regions where atoms are broken up or ionized.”

The emission lines are only visible while the most massive stars shine, therefore the timescales traced by these lines are dependent on the lifespan of these stars (about 10 to 50 million years). Therefore, emission lines can be used to trace the instantaneous activity and conditions in star-forming regions of galaxies.

In the study, the researchers used a sample of emission line selected galaxies from the High-z Emission Line Survey (HiZELS) to trace the evolution in the strengths of emission lines associated with singly ionized and doubly ionized oxygen.

The importance of these two lines is that they provide information regarding the energetic excitation (ionized) state of the gas since the main difference between the two lines is the energy needed to go from singly to doubly ionized oxygen.

This is accomplished because of the unique design of HiZELS. The survey uses four narrowband filters, one installed on the Subaru Telescope in Hawaii and the other three on the United Kingdom InfraRed Telescope (UKIRT), also in Hawaii. These filters are narrow enough that the light from an emission line would dominate the detector of the telescope. As emission lines are narrow and redshifted, they act as testifiers of four different time slices (one for each filter) of the universe’s history.

The authors also used a wealth of ancillary data from various ground-based telescopes such as the Canada France Hawaii Telescope in Hawaii as well as space-based telescopes such as the Spitzer Space Telescope. Their samples also include spectroscopic follow up using the DEIMOS and MOSFIRE spectrographs on the W. M. Keck Observatory, and spectroscopy from other studies. The study is comprised of 7,000 galaxies.