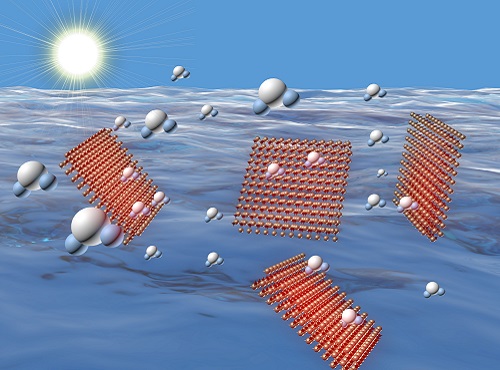 Membranes of MXene have potential for water purification. © 2017 KAUST

Materials called transition-metal carbides have remarkable properties that open new possibilities in water desalination and wastewater treatment. A KAUST team has found compounds of transition metals and carbon, known as a MXenes but pronounced “maxenes,” can efficiently evaporate water using power supplied by the sun1.

Renyuan Li, a Ph.D. student at KAUST, has investigated a MXene in which titanium and carbon combine with the formula Ti3C2. “This is a very exciting material,” said Associate Professor Peng Wang, Li’s supervisor at the KAUST Water Desalination and Reuse Center.

Wang explains his excitement comes from their finding that Ti3C2 can trap the energy of sunlight to purify water by evaporation with an energy efficiency that is “state of the art.” He says this clearly justifies more research toward practical applications.

Other researchers had explored the ability of MXenes to act as electromagnetic shielding materials due to their ability to absorb wavelengths of electromagnetic radiation beyond the visible range. So the KAUST discovery began with a simple question. “We decided to investigate, what is the interaction with this MXene and sunlight?” Wang explained. With his group’s focus on desalination technology, using the sun’s energy to convert water into steam was an obvious target.

The KAUST team’s first observation was that Ti3C2 converts the energy of sunlight to heat with 100% efficiency. Also important, however, was that the sophisticated system developed during this research to measure light-to-heat conversion showed that various other materials, including carbon nanotubes and graphene, also achieved almost perfectly efficient conversion.

“I suggest the focus of the field should now move away from finding new photothermal materials toward finding applications for the many perfect ones we now have,” said Wang.

To investigate MXene’s possibilities in water purification, the researchers then fabricated a thin and flexible Ti3C2 membrane incorporating a polystyrene heat barrier to prevent the heat energy from escaping. This created a system that could float on water and evaporate some of the water with 84% efficiency at the illumination levels of natural sunlight.

For Wang, the next challenge is how to move from this basic research finding toward practical applications. Wang hopes to break through what he calls “the 85% efficiency barrier,” taking photo-thermal purification of water into new territory.

In addition to maximizing the system’s light-trapping capacity, the researchers want to investigate ways to capture the water vapor and yield a complete water purifying process. Wang is already in talks with one potential industrial partner.