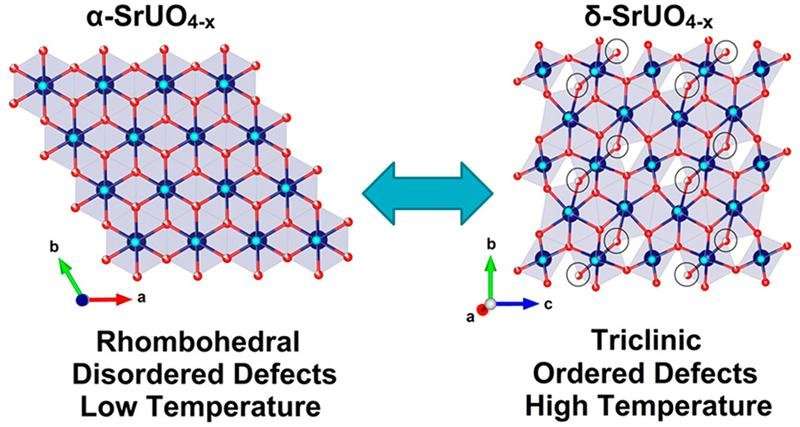 ANSTO’s unique landmark infrastructure has been used to study uranium, the keystone to the nuclear fuel cycle. The advanced instruments at the Australian Synchrotron and the Australian Centre for Neutron Scattering have not only provided high resolution and precision, but also allowed in situ experiments to be carried out under extreme sample environments such as high temperature, high pressure and controlled gas atmosphere.

As part of his joint Ph.D. studies at the University of Sydney and ANSTO, Gabriel Murphy has been investigating the condensed matter chemistry of a crystalline material, oxygen-deficient strontium uranium oxide, SrUO4-x, which exhibits the unusual property of having ordered defects at high temperatures.

“Strontium uranium oxide is potentially relevant to spent nuclear fuel partitioning and reprocessing,” said Dr. Zhaoming Zhang, Gabriel’s ANSTO supervisor and a co-author on the paper with Prof Brendan Kennedy of the University of Sydney that was published recently in Inorganic Chemistry.

Pertinent to the latter scenario, the common fission daughter Sr-90 may react with oxidised uranium to form ternary phases such as SrUO4.

In a previous investigation also published in Inorganic Chemistry, Gabriel and colleagues found that the oxygen-deficient α polymorph (α-SrUO4) can, in the presence of oxygen, transform into a more stable, stoichiometric β-SrUO4 at 830°C. However, this structural change can be stopped if no oxygen is present in the sample environment.

In the latest study, they heated α-SrUO4 up to 1000°C in situ under pure hydrogen gas flow on the powder diffraction beamline at the Australian Synchrotron, in order to understand structural response to increased oxygen vacancy defects, and there were surprising developments.

“We anticipated that the oxygen vacancy content would go up with increasing temperature. It did, but there was also unexpected ordering of oxygen vacancies signalling a phase transformation to the lower symmetry δ phase, which was totally unexpected,” said Zhang.

“Generally when you go to higher temperature, you expect an increase in disorder. In this example, we observed the ordering of oxygen defects and the lowering of crystallographic symmetry at higher temperature, which is counter-intuitive,” said Zhang.

The investigators were able to demonstrate that cooling the sample resulted in the disordering of oxygen defects and reformation of the original α-SrUO4-x structure, which means that this process is completely reversible and the ordering is not a consequence of decomposition or chemical change, but purely thermodynamic in origin.

“To the best of our knowledge this is the first example for a material to exhibit a reversible symmetry lowering transformation with heating, and remarkably the system is able to become more ordered with increasing temperature,” said Zhang.

“There is an interplay between entropy and enthalpy in this system, with entropy as the possible driver for the observed high temperature ordering phase transition.”

“Every time you create oxygen vacancies, you are reducing the uranium.”

“When there are no oxygen vacancies present, uranium is 6+ in SrUO4. With the creation of oxygen vacancies, some of the hexavalent uranium ions are reduced to pentavalent uranium, hence you create disorder in the cation sublattice with the possibility of short-range ordering of the uranium 5+ cations,” explained Zhang.

The structural changes were also investigated by theoretical modelling carried out by a team specialising in uranium and actinide computational modelling under Dr. Piotr Kowalski at Forschungszentrum Jülich in Germany.

“The structural model of δ-SrUO4-x gave an excellent fit to the experimental data, and suggested the importance of entropy changes associated with the temperature-dependent short-range ordering of the reduced uranium species,” said Zhang.

The structure of the α- and β-form of SrUO4 was determined in earlier work with the assistance of Dr. Max Avdeev on the Echidna high resolution powder diffractometer at the Australian Centre for Neutron Scattering, which provided more accurate positions for the oxygen atoms in the structure given that neutrons are much more sensitive to oxygen than X-rays especially in the presence of heavier atoms such as uranium.

The X-ray data were collected on the powder diffraction beamline at the Australian Synchrotron, assisted by beamline scientist, Dr. Justin Klimpton.

The investigators were able to flow pure hydrogen through the sample, while heating it up to 1000°C, followed by cooling and re-heating it on the synchrotron beamline.

“We were trying to see how many oxygen vacancies could be hosted in the lattice and to observe how these vacancy defects affect the structure in real time,” said Zhang.

The investigators suspected that the δ phase only formed when the concentration of oxygen vacancy defects reached a critical value, as the ordered δ structure was not observed when the experiment was carried out in air instead of pure hydrogen.

When the temperature was reduced below 200°C, the ordered superstructure was lost even while maintaining a hydrogen atmosphere and, presumably, constant number of vacancy defects.

The reversible transformation is believed to be a thermodynamically driven process and not caused by a change in the concentration of oxygen vacancies.

The group of investigators has recently concluded testing of other related ternary uranium oxides to see if the phenomenon was a one-off.

There is every indication that this unique phenomenon occurs in these materials as well, and the physical origin of this lies within the unique chemistry of uranium.

The startling implications of this novel phase transformation are apparent when considering societally important materials such as superconductors which possess desirable ordered properties at low temperatures but are inevitably lost to disorder at high temperatures.

This work demonstrates that order may be achieved from disorder through carefully balancing enthalpy and entropy.