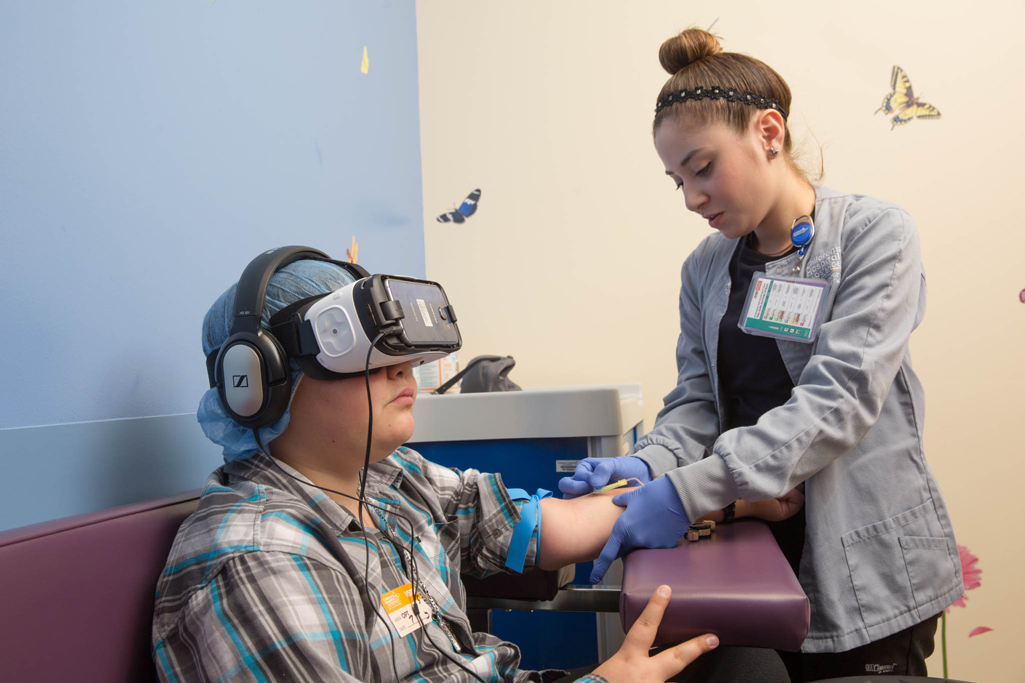 For a child, even a simple medical procedure like a blood draw, needle poke, or IV insertion can be scary and stressful.

During these procedures, the child’s distress can negatively affect everyone in the room—including the child’s parents and the medical professional performing the task, explained Jeffrey I. Gold, Ph.D., director of the Pediatric Pain Management Clinic at Children’s Hospital Los Angeles and professor of anesthesiology, pediatrics, and psychiatry & behavioral sciences at the Keck School of Medicine, USC.

“When a child comes into phlebotomy to give blood, they can be screaming or crying, or just really nervous,” said Gold, in an interview with R&D Magazine. “The child tenses up, and when that happens it can be  more challenging to insert a needle. Their muscles are taut, their heart rate is elevated, and they are fidgety in the chair. The parents then become stressed. Sometimes the phlebotomist experiences all of this distress and maybe it takes him or her a couple of times to insert the needle correctly. That is a bad outcome.”

Gold and his team at Children’s Hospital Los Angeles are taking a unique approach to reducing a child’s distress during blood draws and other acute painful medical procedures—virtual reality (VR).

In Gold’s clinic, patients have the opportunity to wear a VR headset during routine procures like blood draws, and play a game specifically designed to be used in this setting.

“When a child is experiencing VR during their blood draw, they are more relaxed, they are having fun, giggling, or smiling,” said Gold. “When that happens, it makes it a lot easier for the phlebotomist, and when the kid is calm, the parent is calm. The whole temperature of the room just kind of comes down because everyone is a lot more relaxed.”

To do this, they collaborated with AppliedVR, a software solutions company who supplied specialized headsets for the study and worked with Gold to design and develop content for the virtual reality experience.

In the trial, patients played a VR game called Bear Blast, which was specially designed for the purpose of pain management. In the visually driven-game, kids launch foam balls at silly, cartoon bears just by looking at them.

The minimal movement requirements of the game are ideal for medical applications, said Gold, and the simplicity of the game makes it something everyone can enjoy.

“It’s a novel game that kids haven’t seen before, and they can earn points, and go up levels,” said Gold. “It’s very engaging and fun for them.”

During the trial, feedback was gathered from the child, the parent, and the phlebotomist. Although the trial results are not yet published, Gold shared some insight into what they have learned so far.

“Across the board everyone liked it, everyone thought it was useful,” said Gold. “It made the procedure easier, the parents thought the kids were more calm, and the kids that went through the VR reported that they had less pain and anxiety versus the kids that went through the standard of care. The phlebotomists also reported it was a worthwhile and useful tool for blood draw.”

In addition to blood draw, VR also has potential to reduce pain during IV placement, cast and pin removal, laceration repairs, spinal taps, and many other painful medical procedures at a pediatric hospital, said Gold.

“The list is endless,” said Gold. “There are so many acute painful procedures in a hospital where this could be applied. That makes it a really wonderful technology application.”

The application could also be used when anesthesia is given to a child prior to surgery, as this can be anxiety promoting for many children, said Gold. While this procure is not typically painful, it can be stressful, and calming the child before the surgery offers a host of benefits.

“There is the idea that if you go down hard before your surgery, you can wake up agitated, disorientated, kind of in a heightened state of distress, versus if you go down calm and relaxed, you tend to wake up in the same way,” explained Gold. “The idea is if you get these kids to go down comfortably in a non-combative way using VR, than it will lead to better outcomes when they awaken.”

Gold and his team are also developing VR environments to be used over longer period of time for children with chronic pain. There is a significant need for a novel tool to help children, and adults, in this situation.

While VR does work in part, by distracting the patient from the pain, it is actually doing much more than that, said Gold.

Through past work using functional magnetic resonance imaging (fMRI), Gold has discovered that VR actually activates endogenous biological mechanisms that are know to be associated with pain inhibition.

“I believe that there are other mechanisms at play that contribute to our capacity to inhibit incoming pain signals as a result of playing in the virtual reality environment, that are different than just being distracted,” said Gold. “The virtual reality as I witnessed it in our imaging studies demonstrated that our frontal lobe—the part of our brain that contributes to inhibiting incoming signals—was activated during the VR conditions, when it wasn’t activated during the control condition.”

The growth of VR

Gold has been experimenting with VR for acute pain management since the late 1990s. But it wasn’t until recently, when the technology began to become more commonplace, that interest in his field has really picked up.

“Since about 2014 with Mark Zukerberg’s purchase of the Oculus, VR has really exploded. Prior to 2014, people weren’t all that interested in virtual reality for uses other than entertainment,” said Gold.

“When I started doing VR experimentally that was a very esoteric, intellectual pursuit because the technology was like $50,000 a system,” he said. “Now you can get them for $50 and put your Samsung phone in there for a couple hundred dollars and get the whole system. It has really gotten to the point where it is off the shelf and available.”

As costs for VR continue to come down, Gold hopes to see more researchers following his lead.

“It’s really mainstreamed in a way it never has before,” he said. “In it’s current format, VR is in it’s infancy. Now that the technology is so easily accessible, I hope there will be lots of studies examining its use in healthcare.”