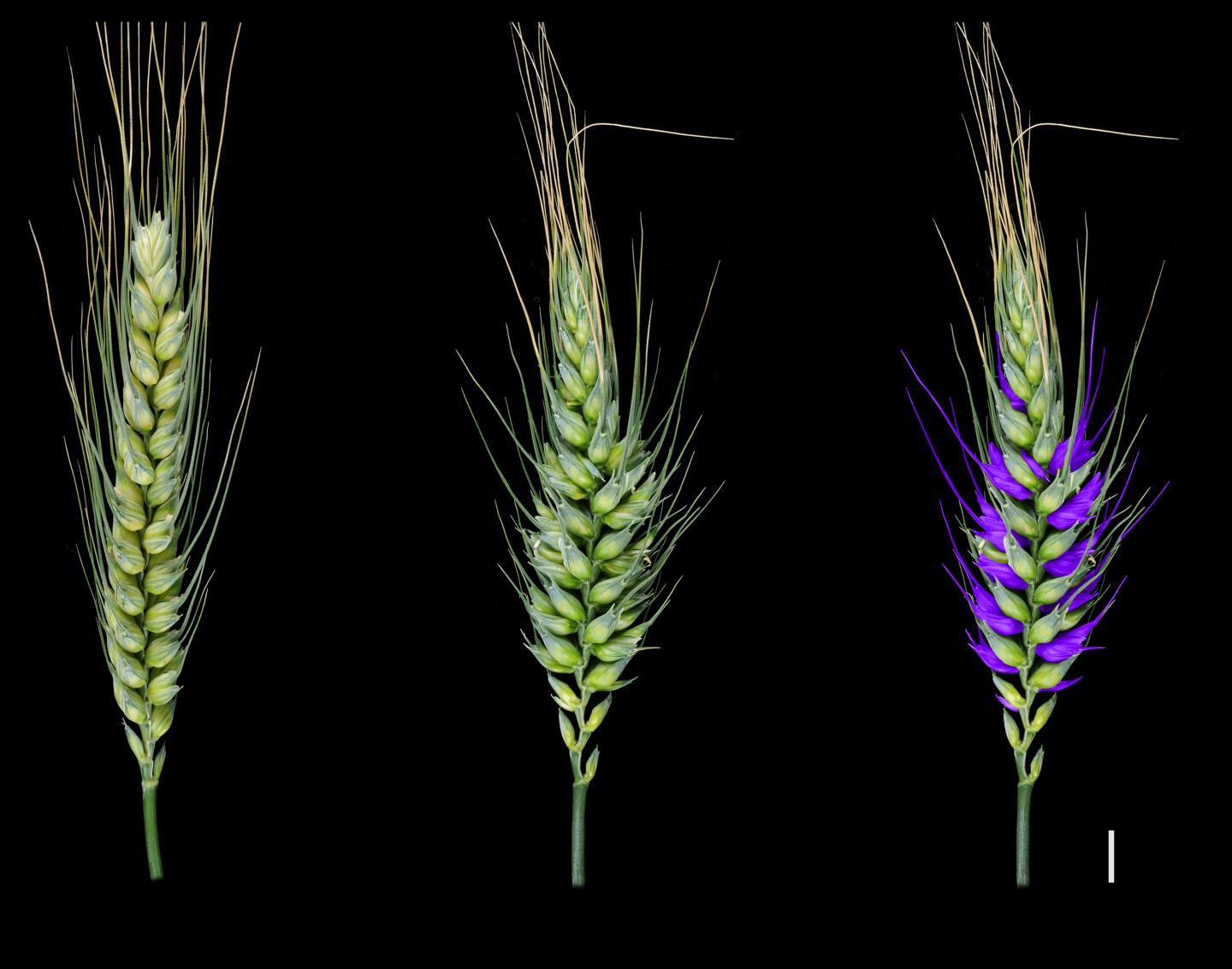 This is floral architecture in wheat. The spikelets highlighted in purple are the additional spikelets which form part of the paired spikelets.

A new study has isolated a gene controlling shape and size of spikelets in wheat in a breakthrough which could help breeders deliver yield increases in one of the world’s most important crops.

The team from the John Innes Centre say the underlying genetic mechanism they have found is also relevant to inflorescence (floral) architecture in a number of other major cereals including corn, barley and rice.

The genetic identification of an agronomically-relevant trait represents a significant milestone in research on wheat; a crop with a notoriously complex genome.

The findings, published today in the journal The Plant Cell, give breeders a new tool to accelerate the global quest to improve wheat. The study also highlights a range of next generation techniques available for fundamental research into wheat, the world’s most abundantly produced crop.

The Wheat Initiative, which co-ordinates global research for wheat, has identified floral architecture as one of the key traits which must be improved if a 1.6% yield increase needed to feed a growing world population is to be reached.

Dr Scott Boden from the John Innes Centre, whose crop genetics laboratory led the study alongside colleagues from Australia and Cambridge, said it represented a breakthrough both in lab and field.

“This paper is an example of what we are capable of doing in wheat now with a lot of the resources that are coming on board. We have gone from the field to the lab and back again. This is a developmental gene that contributes to a lot of agronomically important traits. This knowledge and the resources that come from this study can be used to see if it really does benefit yield.”

“We have approached this in an academic sense but we have moved it towards giving breeders tools they can work with to optimise floral development.”

Diversity of floral architecture has been exploited by generations of crop breeders to increase yields, and genetic variation for this trait has the potential to further boost grain production.

The study focused on the genetics behind a specific mutant trait in bread wheat known as paired spikelets, where a wheat inflorescence is formed of two spikelets instead of the usual one. This trait, which bears resemblance to flower production in corn and rice, is a variation that could lead to increase in yield.

Using a range of techniques including plant transformation, gene sequencing and speed breeding, researchers investigated lines of wheat displaying paired spikelets, derived from a mapping population called a multi-parent advanced generation intercross (MAGIC); a population of spring wheat created as a tool to study and identify the genetic origins of relevant traits.

The study revealed that a gene called TEOSINTE BRANCHED1 (TB1) regulates wheat inflorescence architecture, promoting paired spikelets via a mechanism which delays flowering and reduces the expression of genes that control the development of lateral branches called spikelets.

Further analysis showed that alleles that modify the function of TB1 were present in a wide range of major modern wheat cultivars used by breeders in the UK and Europe. Also, that variant alleles for TB1 were present on two of the three wheat genomes of winter and spring wheat.

Genetic analysis also showed that TB1 is linked to another gene that has been known for a long time: the so-called Green Revolution gene, Rht-1, which controls plant height.

Further studies will determine whether some of the effects attributed to Rht-1 are actually TB1 effects.

The authors of the study say the TB1 gene is also important to the contribution of floral architecture diversity in a number of other cereals including corn, barley and rice – with interest in the paper already coming from those research communities.

Dr Boden hopes that one of the impacts of the paper will be to encourage more early-career researchers to choose wheat for developmental research projects.

The full findings are available in the paper: Teosinte Branched1 regulates inflorescence architecture and development in bread wheat.