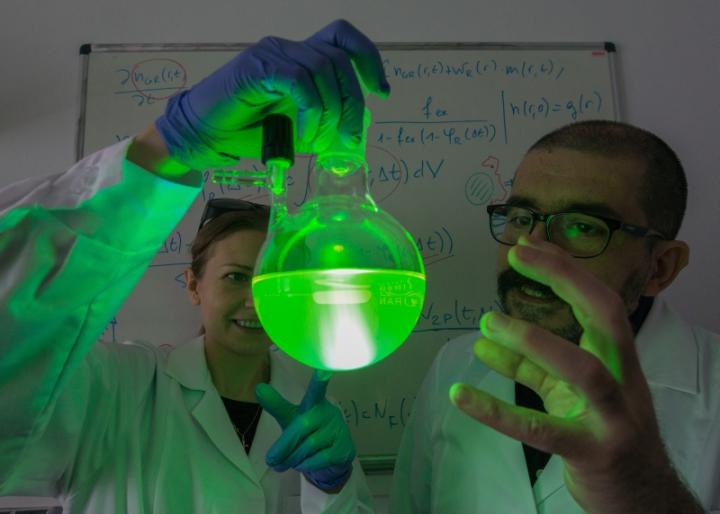 Light initiates many chemical reactions. Experiments at the Laser Centre of the Institute of Physical Chemistry of the Polish Academy of Sciences and the University of Warsaw’s Faculty of Physics have for the first time demonstrated that increasing the intensity of illumination some reactions can be significantly faster. Here, acceleration was achieved using pairs of ultrashort laser pulses.

Light-induced reactions can be accelerated by increasing the intensity of illumination — this has been demonstrated in experiments carried out at the Institute of Physical Chemistry of the Polish Academy of Sciences (IPC PAS) in Warsaw. In order to thoroughly investigate the nature of the processes involved, ultra-short consecutive pairs of laser pulses were used, and an increase in the rate of reaction between the molecules was observed by up to several dozen percent. The observations of the Warsaw scientists have been reported in the well-known scientific journal Physical Chemistry Chemical Physics.

“Our experiments provide fundamental knowledge about the physical processes that are important for the course of important light-induced reactions. This knowledge can potentially be used in many applications, especially when dealing with high intensity light sources. These include, among others, various microscopic imaging techniques, ultra-fast spectroscopy as well as photovoltaics, particularly if light-focusing devices such as solar collectors are used,” says Dr. Gonzalo Angulo (IPC PAS).

In light-induced reactions, a photon with the appropriate energy excites a molecule of dye. When there is a molecule of quencher near the excited molecule, an interaction takes place: there may be a transfer of energy, an electron or a proton, between the two reactants. Reactions of this type are common in nature. A good example is electron transfer in photosynthesis, which plays a key role in the formation of the Earth’s ecosystem.

It turns out that a factor that can influence the acceleration of reactions is the intensity of the light that initiates them. In order to study the nature of the processes taking place, the Warsaw chemists used laser pulses lasting femtoseconds instead of the traditional continuous stream of light. The energy of the impulses was adjusted so that, under their influence, the dye molecules moved into the excited energy state. The pulses were grouped in pairs. The interval between pulses in a pair was several dozen picoseconds (trillionths of a second) and was matched to the type of reacting molecules and the environment of the solution.

“The theory and the experiments required care and attention, but the physical idea itself is quite simple here,” notes Jadwiga Milkiewicz, a PhD student at IPC PAS, and explains: “In order for the reaction to occur, there must be a molecule of quencher near the light-excited dye molecule. So, if we have a pair of molecules that have already reacted with each other this means that they were close enough to each other. By increasing the number of photons in time, we thus increase the chance that if, after the reaction, both molecules have managed to return to their ground state, the absorption of a new photon by the dye has the potential to initiate another reaction before the molecules move away from each other in space.”

The course of reactions in solutions depends on many factors such as temperature, pressure, viscosity or the presence of an electric or magnetic field. The research at the IPC PAS has proved that these factors also influence the acceleration of the chemical reaction that occurs with an increased intensity of illumination. Under some conditions, the acceleration of the reaction was unnoticeable, in optimal conditions the rate of the reaction increased by up to 25-30%.

“In our experiments so far, we have concentrated on light-induced electron transfer reactions, that is, those which change the electrical charge of the molecules. However, we do not see any reason why the mechanism we have observed could not function in other variations of these reactions. So, in the near future, we will try to confirm its efficacy in energy transfer reactions or in reactions involving also proton transfer,” says Dr. Angulo.