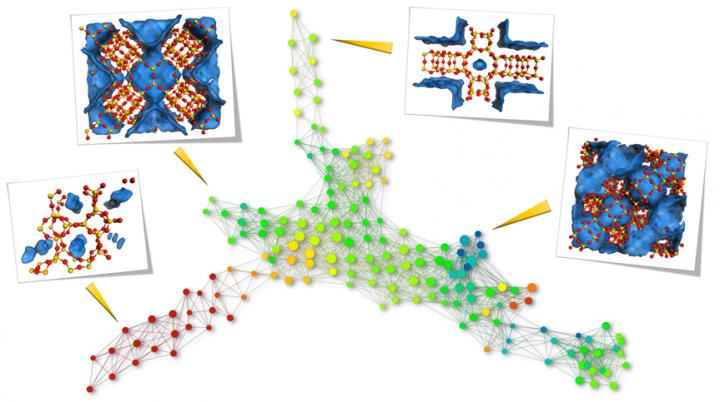 Topological differences of top-performing materials for methane storage. Topological data analysis reveals the similarity between structures; each node represents a family of similar materials, while a network between two nodes indicates that they share at least one material. The further apart the nodes are, the more dissimilar the materials. The pictures show examples of nanoporous materials at the edges, and represent the topologically most different materials (red = Si, yellow = O, blue area = Pores). Source: Berend Smit/EPFL

Materials classified as “nanoporous” have structures (or “frameworks”) with pores up to 100 nm in diameter. These include diverse materials used in different fields from gas separation, catalysis, and even medicine (e.g. activated charcoal). The performance of nanoporous materials depends on both their chemical composition and the shape of their pores, but the latter is very difficult to quantify. So far, chemists rely on visual inspection to see whether two materials have similar pores. EPFL scientists, in the framework of NCCR-MARVEL, have now developed an innovative mathematical method that allows a computer to quantify similarity of pore structures. The method makes it possible to search databases with hundreds of thousands of nanoporous materials to discover new materials with the right pore structure. The work is published in Nature Communications.

The search for nanoporous materials

Nanoporous materials comprise a broad category and can differ widely in their chemical makeup. What unites them is the presence of nano-sized pores in their three-dimensional structure, which endows them with catalytic and absorption properties. These pores can range between 0.2-1000 nanometers, and their size and shape (their “geometry”) can have a decisive effect on the material’s properties. In fact, pore shape is as important a predictor of performance as chemical composition.

Today, computers can generate large databases of potential materials and determine — before having to synthesize them — which materials would perform best for a given application. But their chemistry is so versatile that the number of possible new materials is almost unlimited, while we do not have a method for quantifying and comparing similarity between pore geometries. All this means that finding the best nanoporous material for any given application is challenging.

Math to the rescue

A new method developed in a collaboration of the labs of Berend Smit and Kathryn Hess Bellwald at EPFL uses a technique from applied mathematics called “persistent homology”. This technique can quantify the geometric similarity of pore structures by adopting the mathematical tools that are commonly used by Facebook and others to find similar faces in uploaded photos.

The persistent homology method produces “fingerprints”, represented by barcodes, that characterize the pore shapes of each material in the database. These fingerprints are then compared to compute how similar the pore shapes of two materials are. This means that this approach can be used to screen databases and identify materials with similar pore structures.

The EPFL scientists show that the new method is effective at identifying materials with similar pore geometries. One class of nanoporous materials that would benefit from this innovation are the zeolites and the metal-organic frameworks (MOFs), whose applications range from gas separation and storage to catalysis.

The scientists used methane storage — an important aspect of renewable energy — as a case study. The new method showed that it is possible to find nanoporous materials that perform as well as known top-performing materials by searching databases for similar pore shapes.

Conversely, the study shows that the pore shapes of the top-performing materials can be sorted into topologically distinct classes, and that materials from each class require a different optimization strategy.

“We have a database of over 3,000,000 nanoporous materials, so finding similar structures through visual inspection is out of the question,” says Berend Smit. “In fact, going through the literature, we found that authors often don’t realize when a new MOF has the same pore structure as another one. So we really need a computational method. However, while humans are intuitively good at recognizing shapes as the same or different, we needed to work with the math department at EPFL to develop a formalism that can teach this skill to a computer.”

“In the field of algebraic topology, mathematicians have formulated the theory of persistence homology in any dimension,” says Kathryn Hess. “Previous applications used only the first two of these dimensions, so it’s exciting that chemical engineers at EPFL have discovered a significant application that requires the third dimension as well.”