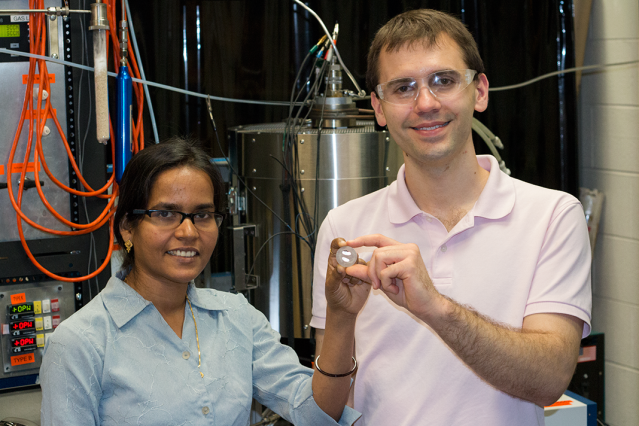 An electrolysis cell is a closed circuit, like a battery, but instead of producing electrical energy, it consumes electrical energy to break apart compounds into their elements, for example, splitting water into hydrogen and oxygen. Such electrolytic processes are the primary method of aluminum production and are used as the final step to remove impurities in copper production. Contrary to aluminum, however, there are no direct electrolytic decomposition processes for copper-containing sulfide minerals to produce liquid copper.

The MIT researchers found a promising method of forming liquid copper metal and sulfur gas in their cell from an electrolyte composed of barium sulfide, lanthanum sulfide, and copper sulfide, which yields greater than 99.9 percent pure copper. This purity is equivalent to the best current copper production methods. Their results are published in an Electrochimica Acta paper with senior author Antoine Allanore, assistant professor of metallurgy.

“It is a one-step process, directly just decompose the sulfide to copper and sulfur. Other previous methods are multiple steps,” Sahu explains. “By adopting this process, we are aiming to reduce the cost.”

Copper is in increasing demand for use in electric vehicles, solar energy, consumer electronics and other energy efficiency targets. Most current copper extraction processes burn sulfide minerals in air, which produces sulfur dioxide, a harmful air pollutant that has to be captured and reprocessed, but the new method produces elemental sulfur, which can be safely reused, for example, in fertilizers. The researchers also used electrolysis to produce rhenium and molybdenum, which are often found in copper sulfides at very small levels.

The new work builds on a 2016 Journal of The Electrochemical Society paper offering proof of electrolytic extraction of copper authored by Samira Sokhanvaran, Sang-Kwon Lee, Guillaume Lambotte, and Allanore. They showed that addition of barium sulfide to a copper sulfide melt suppressed copper sulfide’s electrical conductivity enough to extract a small amount of pure copper from the high-temperature electrochemical cell operating at 1,105 degrees Celsius (2,021 Fahrenheit). Sokhanvaran is now a research scientist at Natural Resources Canada-Canmet Mining; Lee is a senior researcher at Korea Atomic Energy Research Institute; and Lambotte is now a senior research engineer at Boston Electrometallurgical Corp.

“This paper was the first one to show that you can use a mixture where presumably electronic conductivity dominates conduction, but there is not actually 100 percent. There is a tiny fraction that is ionic, which is good enough to make copper,” Allanore explains.

“The new paper shows that we can go further than that and almost make it fully ionic, that is reduce the share of electronic conductivity and therefore increase the efficiency to make metal,” Allanore says.

These sulfide minerals are compounds where the metal and the sulfur elements share electrons. In their molten state, copper ions are missing one electron, giving them a positive charge, while sulfur ions are carrying two extra electrons, giving them a negative charge. The desired reaction in an electrolysis cell is to form elemental atoms, by adding electrons to metals such as copper, and taking away electrons from sulfur. This happens when extra electrons are introduced to the system by the applied voltage. The metal ions are reacting at the cathode, a negatively charged electrode, where they gain electrons in a process called reduction; meanwhile, the negatively charged sulfur ions are reacting at the anode, a positively charged electrode, where they give up electrons in a process called oxidation.

In a cell that used only copper sulfide, for example, because of its high electronic conductivity, the extra electrons would simply flow through the electrolyte without interacting with the individual ions of copper and sulfur at the electrodes and no separation would occur. The Allanore Group researchers successfully identified other sulfide compounds that, when added to copper sulfide, change the behavior of the melt so that the ions, rather than electrons, become the primary charge carriers through the system and thus enable the desired chemical reactions. Technically speaking, the additives raise the bandgap of the copper sulfide so it is no longer electronically conductive, Chmielowiec explains. The fraction of the electrons engaging in the oxidation and reduction reactions, measured as a percentage of the total current, that is the total electron flow in the cell, is called its faradaic efficiency.

“Demonstrating that we can perform faradaic reactions in a liquid metal sulfide is novel and can open the door to study many different systems,” Chmielowiec says. “It works for more than just copper. We were able to make rhenium, and we were able to make molybdenum.” Rhenium and molybdenum are industrially important metals finding use in jet airplane engines, for example. The Allanore laboratory also used molten electrolysis to produce zinc, tin and silver, but lead, nickel and other metals are possible, he suggests.

The amount of energy required to run the separation process in an electrolysis cell is proportional to the faradaic efficiency and the cell voltage. For water, which was one of the first compounds to be separated by electrolysis, the minimum cell voltage, or decomposition energy, is 1.23 volts. Sahu and Chmielowiec identified the cell voltages in their cell as 0.06 volts for rhenium sulfide, 0.33 volts for molybdenum sulfide, and 0.45 volts for copper sulfide. “For most of our reactions, we apply 0.5 or 0.6 volts, so that the three sulfides are together reduced to metallic, rhenium, molybdenum and copper,” Sahu explains. At the cell operating temperature and at an applied potential of 0.5 to 0.6 volts, the system prefers to decompose those metals because the energy required to decompose both lanthanum sulfide — about 1.7 volts — and barium sulfide — about 1.9 volts — is comparatively much higher. Separate experiments also proved the ability to selectively reduce rhenium or molybdenum without reducing copper, based on their differing decomposition energies.

Important strategic and commodity metals including, copper, zinc, lead, rhenium, and molybdenum are typically found in sulfide ores and less commonly in oxide-based ores, as is the case for aluminum. “What’s typically done is you burn those in air to remove the sulfur, but by doing that you make SO2 [sulfur dioxide], and nobody is allowed to release that directly to air, so they have to capture it somehow. There are a lot of capital costs associated with capturing SO2 and converting it to sulfuric acid,” Chmielowiec explains.

The closest industrial process to the electrolytic copper extraction they hope to see is aluminum production by an electrolytic process known as Hall-Héroult process, which produces a pool of molten aluminum metal that can be continuously tapped. “The ideal is to run a continuous process,” Chmielowiec says. “So, in our case, you would maintain a constant level of liquid copper and then periodically tap that out of the electrolysis cell. A lot of engineering has gone into that for the aluminum industry, so we would hopefully piggyback off of that.”

Sahu and Chmielowiec conducted their experiments at 1,227 C, about 150 degrees Celsius above the melting point of copper. It is the temperature commonly used in industry for copper extraction.

Aluminum electrolysis systems run at 95 percent faradaic efficiency, so there is room for improvement from the researchers’ reported 59 percent efficiency. To improve their cell efficiency, Sahu says, they may need to modify the cell design to recover a larger amount of liquid copper. The electrolyte can also be further tuned, adding sulfides other than barium sulfide and lanthanum sulfide. “There is no one single solution that will let us do that. It will be an optimization to move it up to larger scale,” Chmielowiec says. That work continues.

The work fits into the Allanore Group’s work on high-temperature molten materials, including recent breakthroughs in developing new formulas to predict semiconductivity in molten compounds and demonstrating a molten thermoelectric cell to produce electricity from industrial waste heat. The Allanore Group is seeking a patent on certain aspects of the extraction process.

“Using intelligent design of the process chemistry, these researchers have developed a very novel route for producing copper,” says Rohan Akolkar, the F. Alex Nason Associate Professor of Chemical and Biomolecular Engineering at Case Western Reserve University, who was not involved in this work. “The researchers have engineered a process that has many of the key ingredients — it’s a cleaner, scalable, and simpler one-step process for producing copper from sulfide ore.”

“Technologically, the authors appreciate the need to make the process more efficient while preserving the intrinsic purity of the copper produced,” says Akolkar, who visited the Allanore lab late last year. “If the technology is developed further and its techno-economics look favorable, then it may provide a potential pathway for simpler and cleaner production of copper metal, which is important to many applications.” Akolkar notes that “the quality of this work is excellent. The Allanore research group at MIT is at the forefront when it comes to advancing molten salt electrolysis research.”

“The electrochemistry and thermodynamics in molten salts are quite different than in aqueous [water-based] systems and the research of Allanore and his group demonstrates that a lot of good chemistry has been ignored in the past due to our slavish devotion to water,” Jorné suggests. “Direct electrolysis of metal ores opens the way to a metallurgical renaissance where new discoveries and processes can be implemented and can modernize the aging extraction industry and improve its energy efficiency. The new approach can be applied to other metals of high strategic importance such as the rare earth metals.”

This work was supported by Norco Conservation and the Office of Naval Research.