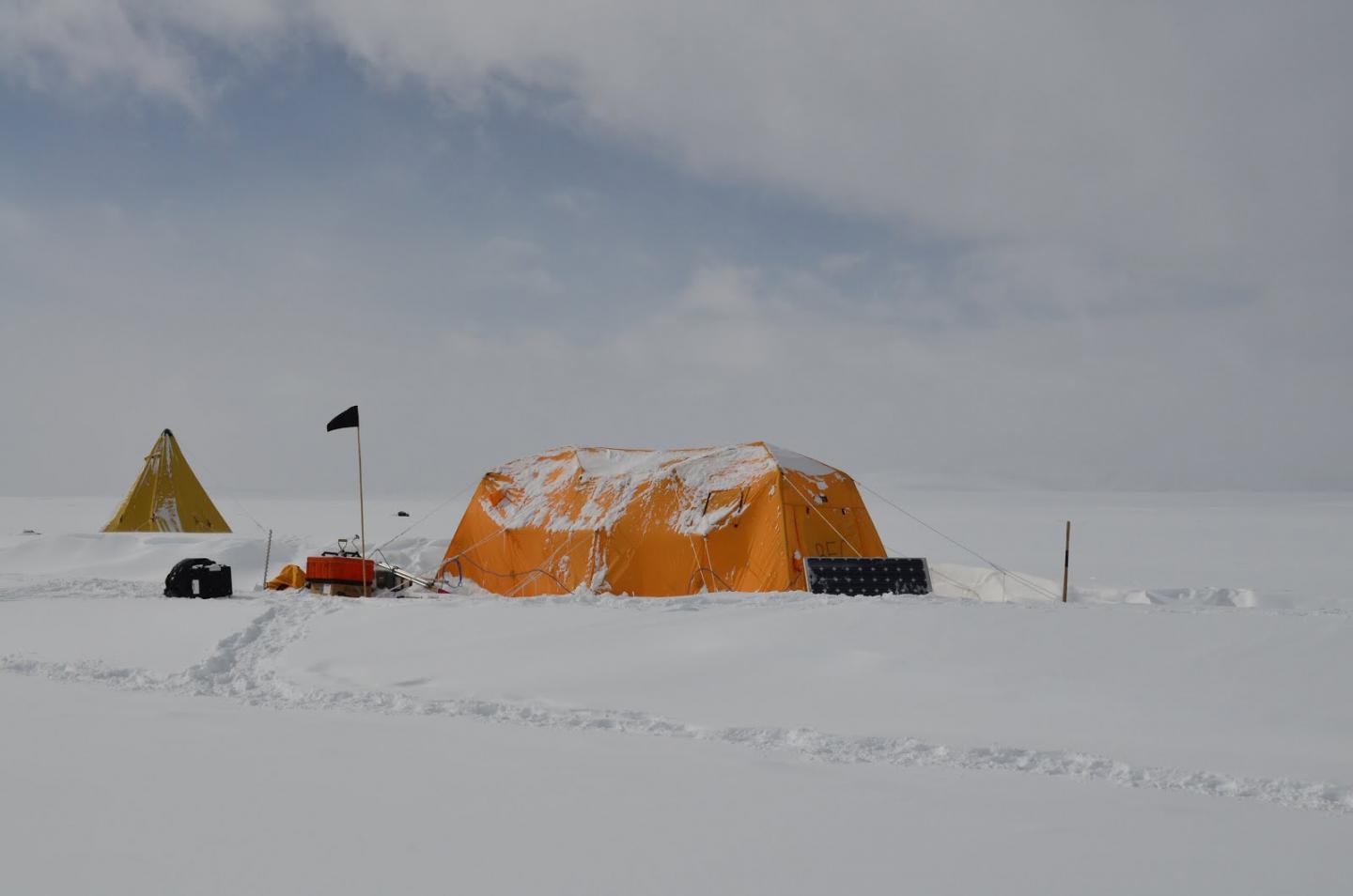 A snowstorm interrupted the fieldwork and left the researchers confined to their field camp for three days. In this windy desert region, most of the snow was blown away the next day. Credit: Laura Kehrl/University of Washington

Ice cores offer a window into the history of Earth’s climate. Layers of ice reveal past temperatures, and gases trapped in bubbles reveal past atmospheric composition. The oldest continuous ice core so far comes from Dome C in East Antarctica and extends back 800,000 years.

But a tantalizing clue recently offered the possibility to go back even further. A collaborative study between the University of Washington and the University of Maine now pinpoints a location where an entire million years of undisturbed ice might be preserved intact.

“There’s a strong desire to push back the date of the oldest ice core record, to better understand what drives natural climate changes,” said Laura Kehrl, a UW doctoral student in Earth and space sciences and corresponding author of the recent paper in Geophysical Research Letters. “The Allan Hills has been an area of interest since the 1970s, when scientists started finding lunar and Martian meteorites that had struck Earth long ago. Now we’re discovering its potential for old ice.”

The team gathered observations in Antarctica’s Allan Hills Blue Ice Area, named for the blue ice that is exposed at the surface when ice above gets vaporized. This windy, desert area gets less than 1 centimeter of snow accumulation per year.

Allan Hills is located near the Trans-Antarctic Mountains, which separate the large, desert plateau of East Antarctica from the stormy West Antarctic Ice Sheet. Ice moves slowly here, less than 1 meter (3 feet) per year. The region had long been rejected in the search for an old ice core because ice flowing over the steep topography at the base seemed likely to be disturbed.

But surprising findings published last summer by a Princeton University team found fragments of ice as far back as 2.7 million years several hundred feet below the surface in the Allan Hills. Those isolated chunks had been separated from their full history. Now the UW team thinks it has found a location nearby that would have a continuous, unbroken record.

“A primary reason to seek such old ice is to understand one of the major puzzles of climate system history,” said second author Howard Conway, a UW research professor of Earth and space sciences and UW’s principal investigator of the project. The puzzle, he explained, is why Earth switched about 1 million years ago from having ice age cycles about every 41,000 years to every 100,000 years. Marine climate records show this switch occurred but they do not resolve details in the atmospheric composition 1 million years ago that might explain the cause.

During the austral summer of 2016, UW researchers traveled to McMurdo Station and then flew to the field site. With support from the National Science Foundation they set up a remote camp on a patch of snow in the Allan Hills, 6,400 feet above sea level.

Researchers used snow machines to tow ice-penetrating radar around the region. The radar sends radio waves into the ice, which reflect off of layers of ice with different chemistries and densities, providing an image of the structure below.

A computer model of glacier flow incorporating the data from those surveys suggests that million-year-old ice is about 25 to 35 meters (about 100 feet) above the bedrock at a site roughly 5 kilometers (3 miles) from the place where the 2.7-million-year-old ice was found.

The UW and Maine team has submitted a follow-up proposal to the National Science Foundation to drill the core. Kehrl says it’s “not unlikely” that they would retrieve an undisturbed record back to 1 million years. An added benefit of drilling here, she said, would be to learn the history of the Ross Ice Shelf and whether it has collapsed in the past, and how that corresponded to carbon dioxide levels in the atmosphere.

“Regardless of whether the million-year ice is there, the record is likely to be valuable,” Kehrl said.