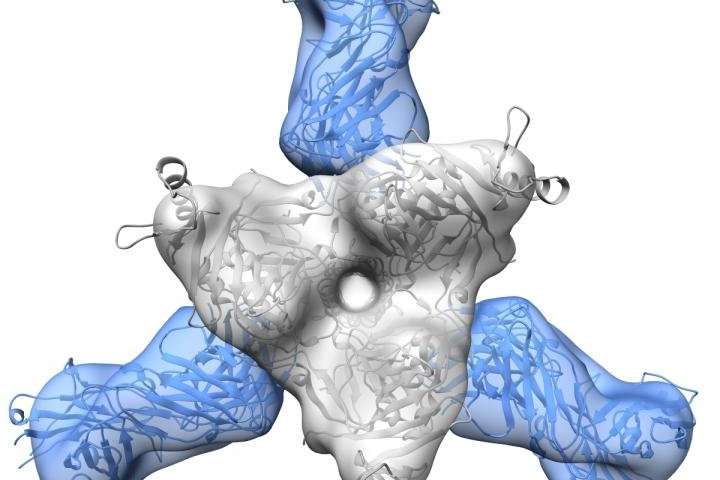 This shows a mouse antibody elicited through sequential immunization with Ebola and Sudan virus-like particles. Both 6D6 and the human 15878 are quaternary in nature, bridging one monomer to another in the trimeric surface glycoprotein. Credit: Ollmann Saphire lab, Scripps Research

New research suggests that an effective treatment against all strains of the Ebola virus may be on the horizon.

In a pair of new studies, researchers from the Scripps Research Institute have demonstrated how human and mouse antibodies can bind to the Ebola virus and stop the infection for both the virus and other closely related pathogens, a discovery that could lead to therapeutics capable of neutralizing all members of the Ebola virus genus.

“This is like understanding how to kill five or six birds with one stone,” Erica Ollmann Saphire, PhD, a professor at Scripps Research and senior author of the new papers, said in a statement. “The different viruses in the Ebolavirus genus vary in their structure, but all these different viruses have the same outbreak potential. We need a therapeutic approach that can target them all.”

It is difficult to treat patients inflicted with the Ebola virus because the virus features five different pathogens.

Members of the genus Ebolavirus include Ebola virus, Sudan virus, Bundibugyo virus, Taï Forest virus and Reston virus, each of which is up to 50 percent different in amino acid sequence.

For example, the Sudan and Bundibugyo viruses were responsible for 40 percent of Ebola cases prior to 2013. However, current experimental Ebola therapies cannot neutralize them.

In addition, all five members of the Ebolavirus genus could mutate to escape immune system defenses and fight off drug therapies.

In their new studies, the researchers observed that antibodies that bind to a site on the viral fusion loop—where viruses fuse with human cells and initiate infection—could neutralize all known Ebolaviruses.

By targeting this peptide, the researchers could eventually develop a universal therapy for infections cause by all five pathogens.

In the first study, published in mBio, the team focused on ADI-15878—a human antibody that has been found in the blood of an Ebola virus survivor and has been found to neutralize all five members of the Ebolavirus genus.

The researchers used X-ray crystallography to model the interaction between the antibody and the viral glycoprotein—the protein that enables Ebola to infect a cell. The glycoprotein is covered with sugars to mask the virus from immune system detecting it.

The researchers found that the antibody binds directly to one of the sugars alongside a paddle-like structure on the fusion loop and part of the antibody will dip down and bind into a pocket that is usually hidden by another part of the viral glycoprotein.

According to the researchers, this action locks two crucial parts of the fusion machinery together to make it impossible for Ebola to get into human cells.

For the second study, published in The Journal of Infectious Diseases, the researchers found that a mouse that has been sequentially immunized with the Ebola virus followed by the Sudan virus had a broadly protective antibody response.

The team found that an antibody dubbed 6D6 from the mouse binds to the same region as ADI-15878 from the previous study, providing evidence that this part of the fusion loop is a target for vaccine design and therapies.

“Both the human and mouse antibodies were able to neutralize all known types of Ebola,” Jacob Milligan, PhD, a research associate at Scripps Research and first author of the Journal of Infectious Diseases study, said in a statement.