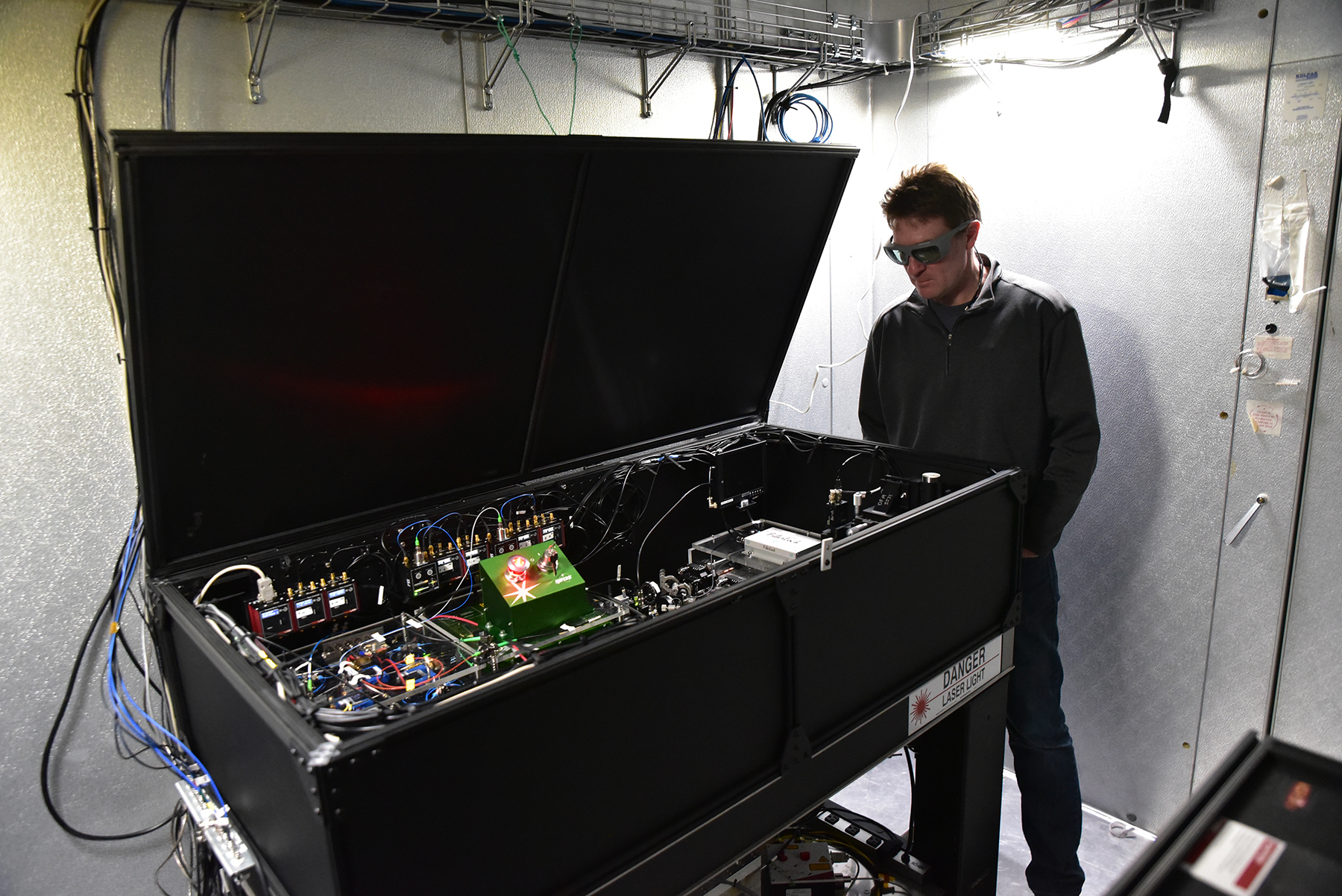 The hunt for Earth-like planets, and perhaps extraterrestrial life, just got more precise, thanks to record-setting starlight measurements made possible by a National Institute of Standards and Technology (NIST) “astrocomb.”

NIST’s custom-made frequency comb—which precisely measures frequencies, or colors, of light—ensures the precision of starlight analysis by an instrument called a spectrograph at the Hobby-Eberly Telescope in Texas. The project is a collaboration involving NIST, the University of Colorado Boulder (CU) and Pennsylvania State University, the primary partner in the telescope and spectrograph.

The new comb apparatus for the first time provides the precision needed for discovering and characterizing planets orbiting M dwarf stars, which comprise 70 percent of the stars in the galaxy and are plentiful near Earth, the research team reported in Optica.

“The comb immediately allowed our Penn State colleagues to make measurements they could not otherwise make,” NIST Fellow Scott Diddams said. “These improved tools should allow us to find habitable planets around the most ubiquitous stars in our galaxy.”

A star’s nuclear furnace emits white light, which is modified by elements in the atmosphere that absorb certain narrow bands of color. To search for planets orbiting distant stars, astronomers look for periodic changes in this characteristic “fingerprint,” that is, very small variations in the apparent colors of starlight over time. These oscillations in color are caused by the star being tugged to and fro by the gravitational pull of an unseen orbiting planet. This apparent wobble is subtle, and measurements are limited by the frequency standards used to calibrate spectrographs.

Hundreds of exoplanets have been discovered using star wobble analysis, but a planet with a mass similar to that of Earth and orbiting at just the right distance from a star—in the so-called “Goldilocks zone”—is hard to detect with conventional technology.

Data collected by the NIST-CU-Penn State research team show the astrocomb will make it possible to detect Earth-mass planets that cause color shifts equivalent to a star wobble of about 1 meter per second—the approximate speed of a person walking across a room, and at least 10 times better than previously achieved in the infrared region of the electromagnetic spectrum. Infrared light is the main type emitted by M dwarf stars.

Over the past 20 years, NIST researchers in Boulder, Colorado, first invented and then pioneered further advances in optical frequency combs. The comb delivered to Texas is unique in having about 5,000 widely spaced “teeth,” or specific color calibration points. It’s tailored to the reading capability of Penn State’s Habitable Zone Planet Finder spectrograph and spans the target infrared wavelength band of 800-1300 nm. Just 60 cm by 152 cm in size and made of relatively simple commercial components, the comb is also robust enough to withstand continuous use at a remote site.

In providing tailored light to the spectrograph, the NIST comb acts like a very precise ruler to calibrate and track exact colors in a star’s fingerprint and detect any periodic variations. The comb, made with new electro-optic laser technology, provides strong signals at accurately defined target frequencies that can be traced to international measurement standards. 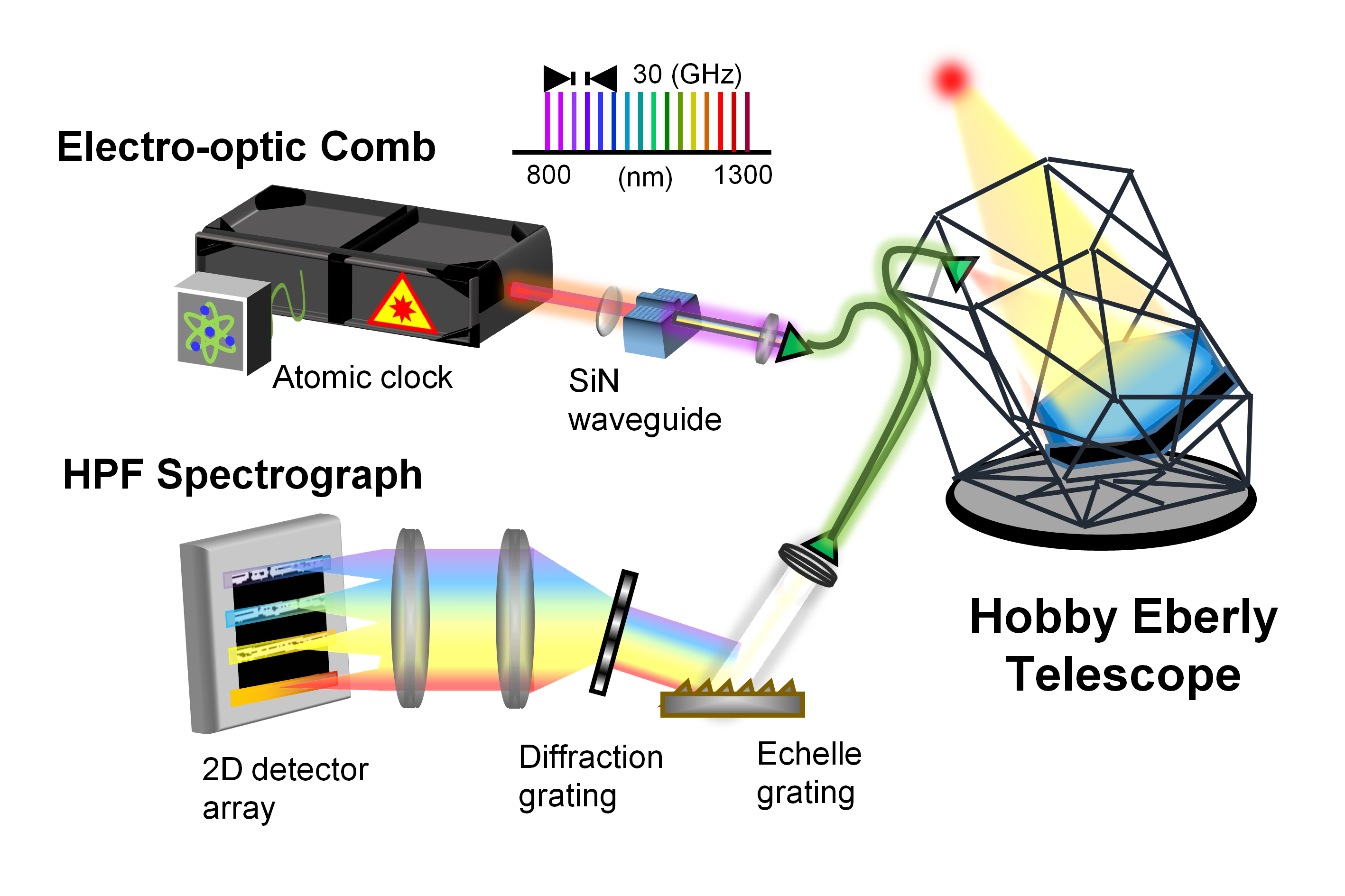 The different components of the setup, including the NIST frequency comb, designed to ensure the precision of starlight analysis at the Hobby-Eberly Telescope in Texas. Image: NIST

The project has been in the works for years. The NIST-CU-Penn State research team did a test run in 2012 that showed the promise of the new approach. The new comb was delivered and saw “first light,” as they say in astronomy, in February 2018, and has been running nightly since May of 2018. The new comb has a broader light range and is more stable than the earlier demo version.

While the idea of using frequency combs to aid planet discovery has generated a lot of interest around the world, the new NIST astrocomb is the first in operation at near-infrared wavelengths. Other combs currently operating on a telescope, such as the High Accuracy Radial Velocity Planet Searcher (HARPS) in Chile, are dedicated to visible light measurements.

The Hobby-Eberly telescope is located at McDonald Observatory, operated by the University of Texas at Austin. The comb work was supported by the National Science Foundation, which provided funding for the hardware and the student and postdoc participants at CU, and the Pennsylvania State University Center for Exoplanets and Habitable Worlds. Funding was also provided by the NIST-on-a-Chip Program, National Aeronautics and Space Administration, and the Heising-Simons Foundation.