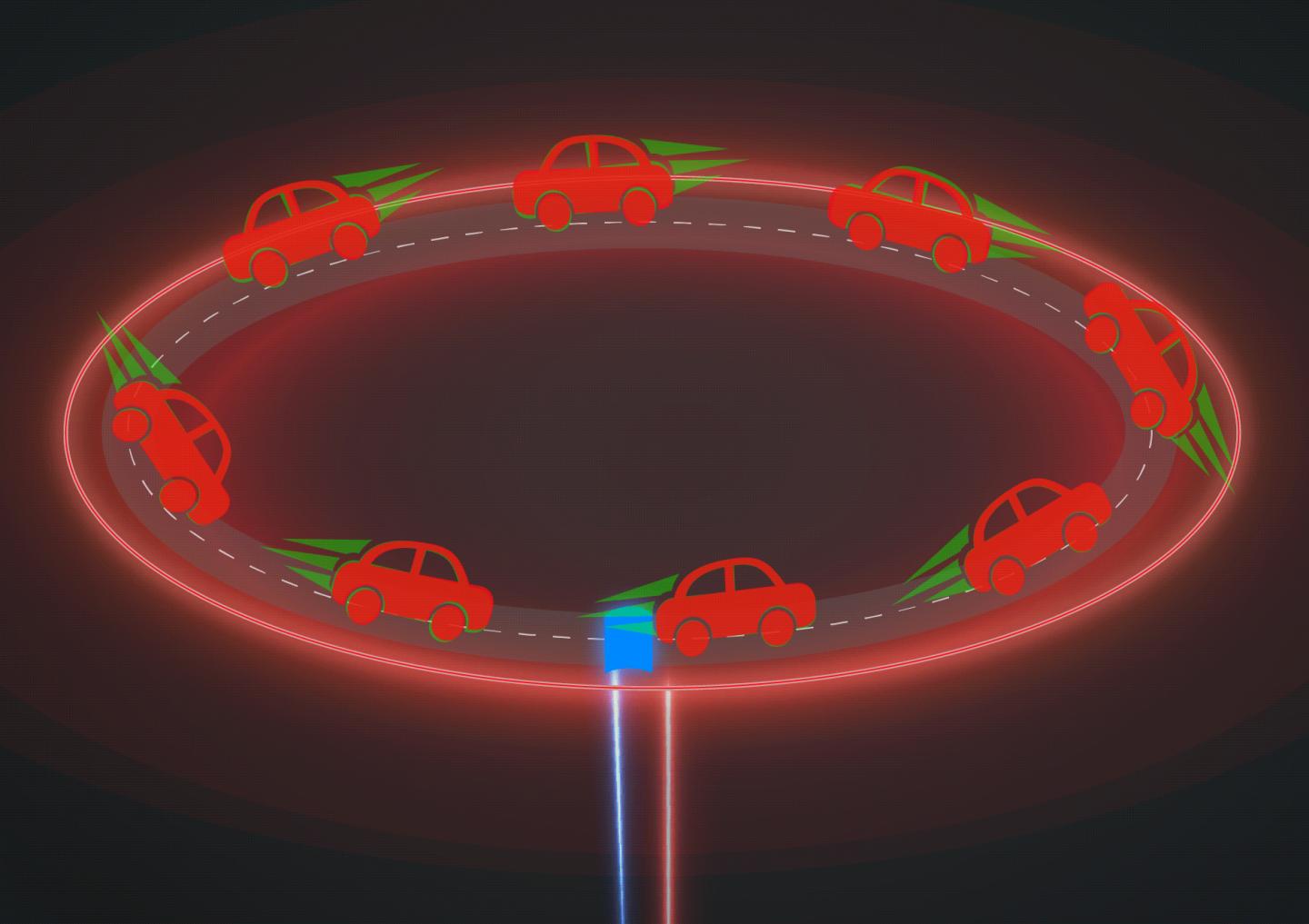 This artist’s conception imagines the proposed ring of atoms as cars on a beltway. Captured and then stirred into motion by lasers, the atoms would form a “superposition,” a quantum state in which they would be simultaneously circulating around the ring and stationary. This state could allow scientists to measure motion precisely, and also potentially the effects of gravity at micrometer length scales. Source: Hanacek / NIST

When is a traffic jam not a traffic jam? When it’s a quantum traffic jam, of course. Only in quantum physics can traffic be standing still and moving at the same time.

A new theoretical paper from scientists at the National Institute of Standards and Technology (NIST) and the University of Maryland suggests that intentionally creating just such a traffic jam out of a ring of several thousand ultracold atoms could enable precise measurements of motion. If implemented with the right experimental setup, the atoms could provide a measurement of gravity, possibly even at distances as short as 10 micrometers – about a tenth of a human hair’s width.

While the authors stress that a great deal of work remains to show that such a measurement would be attainable, the potential payoff would be a clarification of gravity’s pull at very short length scales. Anomalies could provide major clues on gravity’s behavior, including why our universe appears to be expanding at an accelerating rate.

In addition to potentially answering deep fundamental questions, these atom rings may have practical applications, too. They could lead to motion sensors far more precise than previously possible, or serve as switches for quantum computers, with 0 represented by atomic gridlock and 1 by moving atom traffic.

The authors of the paper are affiliated with the Joint Quantum Institute and the Joint Center for Quantum Information and Computer Science, both of which are partnerships between NIST and the University of Maryland.

Over the past two decades, physicists have explored an exotic state of matter called a Bose-Einstein condensate (BEC), which exists when atoms overlap one another at frigid temperatures a smidgen of a degree away from absolute zero. Under these conditions, a tiny cloud of atoms can essentially become one large quantum “superatom,” allowing scientists to explore potentially useful properties like superconductivity and superfluidity more easily.

Theoretical physicists Stephen Ragole and Jake Taylor, the paper’s authors, have now suggested that a variation on the BEC idea could be used to sense rotation or even explore gravity over short distances, where other forces such as electromagnetism generally overwhelm gravity’s effects. The idea is to use laser beams – already commonly used to manipulate cold atoms – to string together a few thousand atoms into a ring 10 to 20 micrometers in diameter.

Once the ring is formed, the lasers would gently stir it into motion, making the atoms circulate around it like cars traveling one after another down a single-lane beltway. And just as car tires spin as they travel along the pavement, the atoms’ properties would pick up the influence of the world around them – including the effects of gravity from masses just a few micrometers away.

The ring would take advantage of one of quantum mechanics’ counterintuitive behaviors to help scientists actually measure what its atoms pick up about gravity. The lasers could stir the atoms into what is called a “superposition,” meaning in effect they would be both circulating about the ring and simultaneously at a standstill. This superposition of flow and gridlock would help maintain the relationships among the ring’s atoms for a few crucial milliseconds after removing their laser constraints, enough time to measure their properties before they scatter.

Not only might this quantum traffic jam overcome a difficult gravity measurement challenge, but it might help physicists discard some of the many competing theories about the universe – potentially helping clear up a longstanding traffic jam of ideas.

One of the great mysteries of the cosmos is why it is expanding at an apparently accelerating rate. Physicists have suggested an outward force, dubbed “dark energy,” causes this expansion, but they have yet to discover its origin. One among many theories is that in the vacuum of space, short-lived virtual particles constantly appear and wink out of existence, and their mutual repulsion creates dark energy’s effects. While it’s a reasonable enough explanation on some levels, physicists calculate that these particles would create so much repulsive force that it would immediately blow the universe apart. So how can they reconcile observations with the virtual particle idea?

“One possibility is that the basic fabric of spacetime only responds to virtual particles that are more than a few micrometers apart,” Taylor said, “and that’s just the sort of separation we could explore with this ring of cold atoms. So if it turns out you can ignore the effect of particles that operate over these short length scales, you can account for a lot of this unobserved repulsive energy. It would be there, it just wouldn’t be affecting anything on a cosmic scale.”

The research appears in the journal Physical Review Letters.