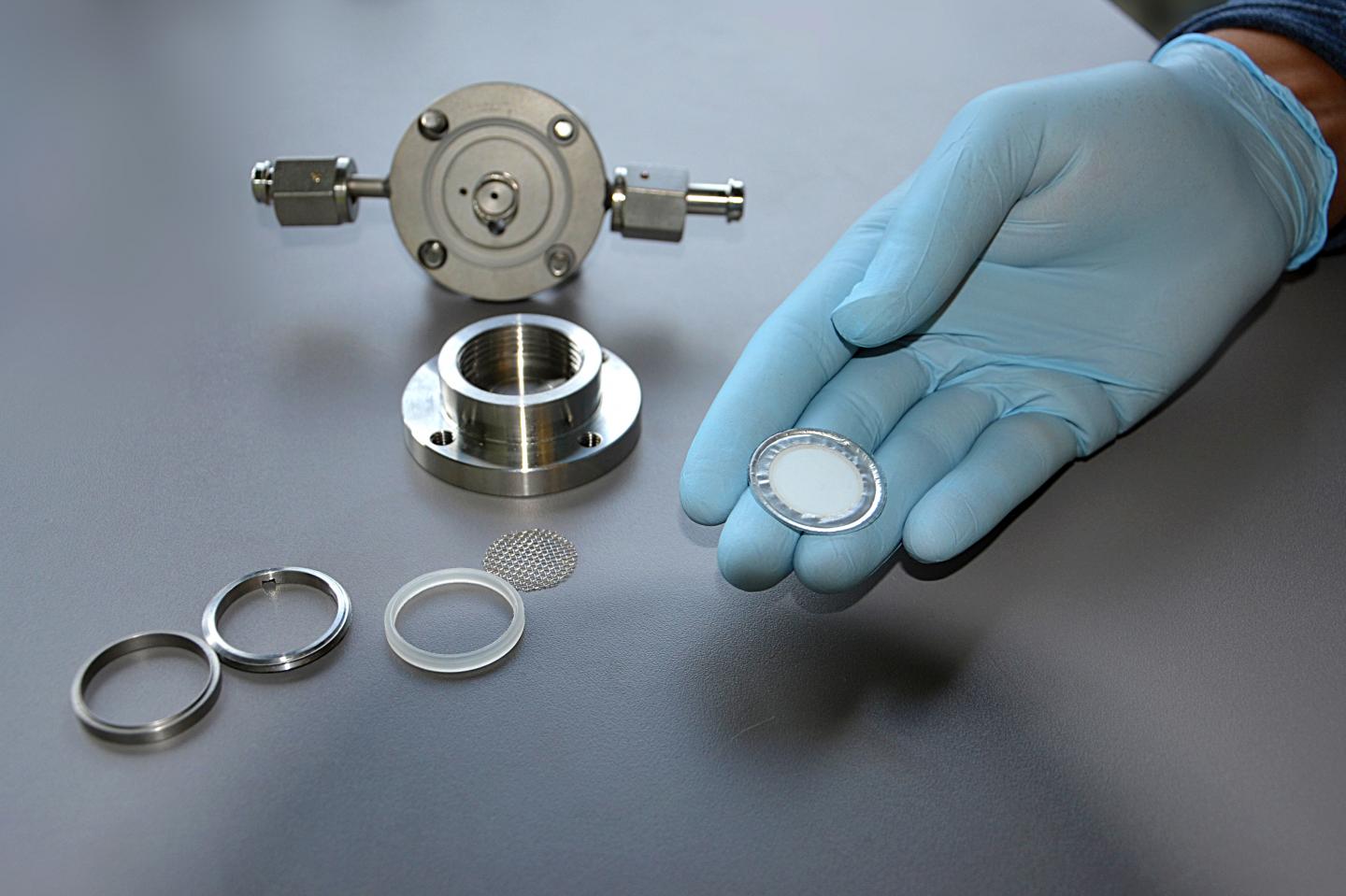 Michael Metzger, researcher at the Technical University of Munich (TUM), shows the core of his new battery test cell: A glass ceramic membrane, coated with aluminum and plastic, allows only lithium ions to pass through. It is impermeable to all other components of the electrolyte fluid, thus allowing to investigate anionic and cationic reactions in lithium-ion batteries separately. Source: Monika Weiner / TUM

For years, small rechargeable lithium-ion batteries have reliably supplied billions of portable devices with energy. But manufacturers of high-energy applications such as electric cars and power storage systems seek for new electrode materials and electrolytes. Michael Metzger, researcher at the Technical University of Munich (TUM), has now developed a new battery test cell allowing to investigate anionic and cationic reactions separately. Recently the researcher was honored with the Evonik Research Prize for his work.

Energy storage systems are in demand as never before. Billions of mobile telephones and tablets need electricity to go. Add to this the growing number of electric cars. But, high-performance batteries can also store renewable energy produced by wind turbines and solar cells so that it can be fed into the grid on cloudy and windless days.

“Manufacturers of rechargeable batteries are building on the proven lithium-ion technology, which has been deployed in mobile devices like laptops and cell phones for many years,” reports TUM researcher Michael Metzger. “However, the challenge of adapting this technology to the demands of electromobility and stationary electric power storage is not trivial.”

Standard rechargeable batteries are only marginally suited for high performance: “To raise the energy density, you need to increase the voltage or the capacity, and that is where traditional electrode materials and electrolytic fluids reach their limits,” explains the physicist.

Research is thus running at full pace around the world. For example, engineers are experimenting with special electrode materials that can provide a voltage of nearly 5 volts, instead of the current maximum of 4.2 to 4.3 volts.

Consult your engineer about risks and side-effects

But this “battery doping” also has side-effects. Changes in the chemical composition of the electrodes and electrolytes can lead to battery performance drops after only a few charging cycles or the formation of gasses at the electrodes that cause the batteries to balloon.

“The future of lithium-ion batteries hinges on getting a grip on these undesirable reactions,” predicts Metzger. He has already fulfilled one prerequisite to this end: The chemical processes that transpire during charging and discharging can be investigated in detail using the new battery test cell he developed with his team.

A test cell for the batteries of the future

The researchers spent three years working on their apparatus. “Normally electrolytic fluids and electrodes – the positive cathode and negative anode – are in a permanent electrochemical exchange,” says Metzger. “Thus far it has not been possible to investigate the reactions at the anode and cathode independently of each other. We are the first to manage this successfully.”

The key: The battery test cell, which, like every lithium-ion battery, comprises an anode, a cathode and electrolytes is not completely sealed, but rather is fitted with a fine capillary. This allows gasses that are released during charging and discharging to be sampled and investigated using a mass spectrometer.

To study the processes at anodes and cathodes independently of each other, the engineers also modified the membrane – a thin glass ceramic platelet coated with aluminum and synthetics – to make it permeable not only by lithium ions, but also by all other components of the electrolytic fluid.

Water is poison for a battery

Using their test cell, the researchers were, for the first time, able to explain precisely what transpires inside a high-voltage battery. The results demonstrate that the stability of electrodes and electrolytes depends on several factors, for example, charging voltage, operating temperature and even tiniest chemical impurities:

“For industrial end-users, the new measurement methodology is extremely interesting,” says Prof. Hubert Gasteiger, who chairs the Department of Technical Electrochemistry. “In our investigations, we were able to show that the development of gasses in batteries can be reduced by adding the right admixtures to the electrolytic fluid or by inhibiting crosstalk between the electrodes.”

One research result, in particular, bears a direct consequence in practice: The higher the desired voltage, the less residual moisture the materials may contain. Manufacturers could extend the lifetime of future cells by replacing the electrolyte ethylene carbonate with more stable solution components.

But here to the devil is in the detail: A small amount of ethylene carbonate is required in current systems to pacify the anode. The new cell allows processes at the anode and the cathode to be observed independently, possibly leading to the discovery of entirely novel solutions.

Metzger was recently honored with the Evonik Research Prize for the development of the battery test cell, which, for the first time, allows mass spectroscopy investigations and an independent analysis of the processes at each electrode. The chemical group Evonik awards the prize annually to an exceptional next-generation scientist.