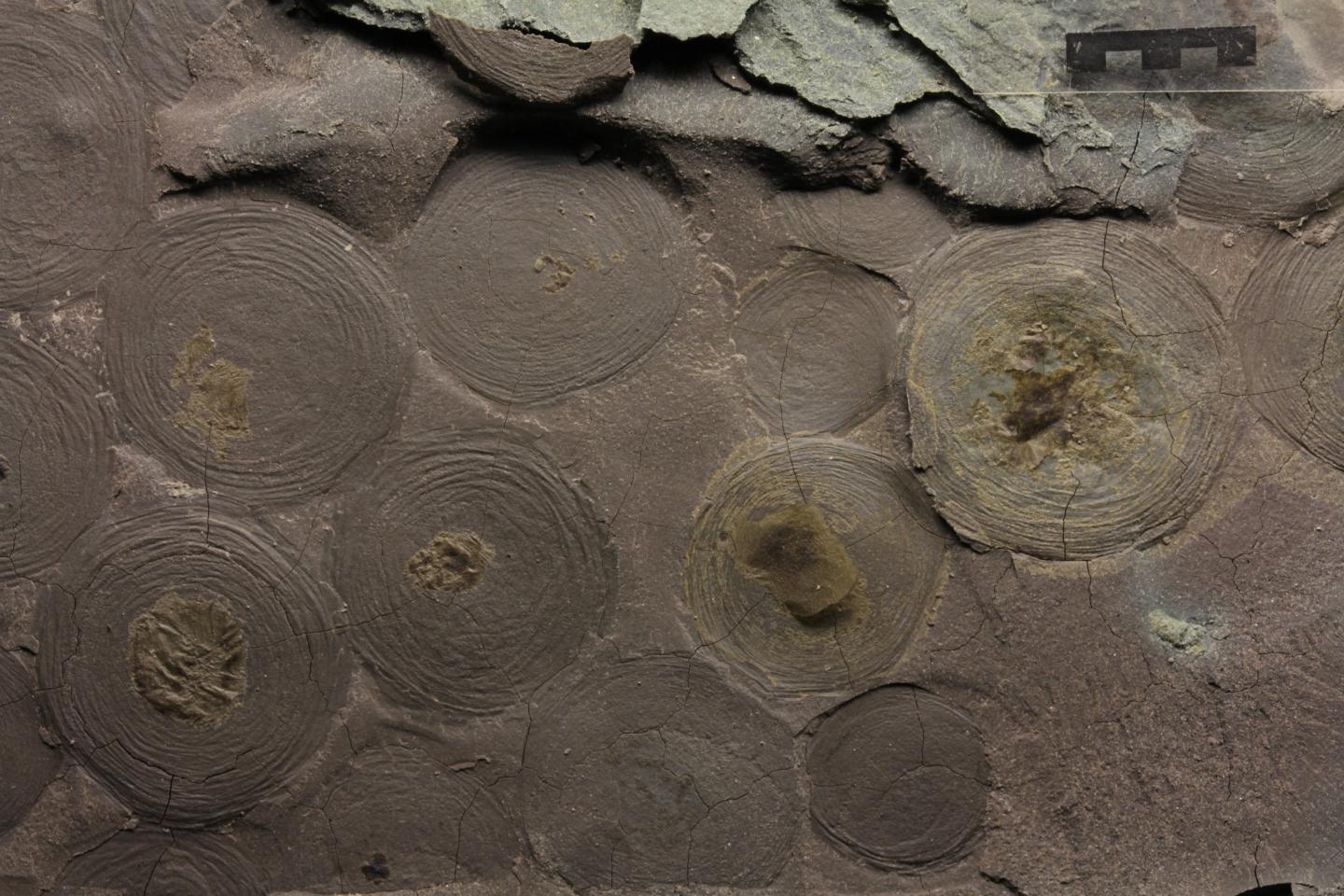 These are impressions of Beltanelliformis. Credit: Sergey Bagirov

A postgraduate student of the Faculty of Geology of MSU, working with an international scientific group, participated in chemical analysis of biomarkers — compounds that remained after the decomposition of organic remains of the genus Beltanelliformis. These organisms populated the Earth in the Ediacaran period (about 575-541 mln years ago), and their position on the evolutionary tree was unknown. The obtained data showed that Beltanelliformis were colonies of cyanobacteria. The results of the work were published in Nature Ecology & Evolution journal.

“Due to the unique preservation of the organic matter of Beltanelliformis in the Vendian deposits in the White Sea the impressions of these organisms became an ideal object for the study of biomarkers. Having researched the remains of organic molecules, we suggested that Beltanelliformis were benthic colonial cyanobacteria. The new method may shed light on the nature of the mysterious Ediacaran macroorganisms and early revolution of life on Earth,” comments Anna Krasnova, a postgraduate student of the Department of Oil and Gas Sedimentology and Marine Geology (Faculty of Geology, MSU), and a researcher at the laboratory of Precambrian organisms at the Paleontological Institute (PIN), RAS.

Oceans were populated by microorganisms for billions of years, but 541 mln years ago everything changed with the Cambrian explosion, the oceans were taken over by animals and became comparable to what we see today. However, the explosion was not as sudden as one may think. For millions of years life was experimenting with macroscopic organisms, and its preliminary results are known as the Ediacaran biota.

The Ediacaran biota is a group of the first large and anatomically complex soft-bodied organisms in the fossil record and at the same time one of the biggest paleontological mysteries in history. They look as strange as if they were from another planet, and therefore their phylogenetic position (i.e. place in the biological taxonomy) remains unclear even on the domain level. In some cases, it is even impossible to tell whether certain impressions belonged to bacteria, giant protozoans, or animals. This was the case with the representatives of the Beltanelliformis genius that formed round impressions about 1 cm in diameter.

“We’ve chosen Beltanelliformis as they are the easiest Ediacarans to study. Unlike other members of the Ediacara biota, they can be very abundant, with thousands of impressions on one surface,” explains Ilya Bobrovskiy, a graduate of the Faculty of Geology, MSU, and a PhD student at the Australian National University (Canberra).

The genius of Beltanelliformis unites two forms that differ by their burial: Nemiana are found at the bases of sand lenses and Beltanelloides are buried within clay or carbonate layers. The fossils look like round impressions with concentric wrinkles that are sometimes covered by thin organic films. These films are remains of material these organisms once consisted of. Some scientists believe that the wrinkles in Beltanelliformis reflect that these organisms had muscles and therefore considered them as multicellular marine animals Cnidaria, assuming them to be relatives of jellyfishes and polyps. Others considered Beltanelliformis as sponges, colonial bacteria, fungi, lichen, plankton and benthic algae.

Scientists studied the samples of Beltanelliformis collected near Lyamtsa village in Arkhangelsk Region. To understand what these organisms were, the researchers came up with a completely new approach to study Ediacaran impressions: they studied biomarkers extracted from the organic remains. Biomarkers are skeletons of biological molecules that allow to figure out what compounds a 500 mln year old organism was made of. The molecules are preserved attached to organic films that cover the surface of the impressions. Scientists already know what compounds are left after photosynthetic algae, bacteria, fungi, or animals. Bacteria are given away by hopanes – polycyclic compounds that make a structural skeleton of hopanoids, which are found within bacterial cell membranes.

The organic films of Beltanelliformis turned out to contain lots of hopanes. At the same time, scientists found in them long-chain odd n-alkanes – linear hydrocarbons with simple bonds. They are characteristic of higher plants and modern freshwater and terrestrial cyanobacteria and play an important role in the formation of a thin wax layer on the surface of organisms that protects them from desiccation. The combination of hopanes and long-chain odd n-alkanes in the organic film covering the fossils allowed authors to conclude that Beltanelliformis were benthic colonial cyanobacteria.

“We managed to develop a completely novel approach of studying the Ediacaran biota that is not based on the interpretation of morphology, i.e. the appearance of the organisms. Using this method, we found out that Beltanelliformis were the remains of colonial cyanobacteria. Now they are among those few members of the Ediacara biota the nature of which is figured out. Unraveling the nature of the Ediacara biota is an important step to understanding how the world around us came to be the way it is today,” concludes Ilya Bobrovskiy.

The outer membrane of long-chain n-alkanes protected the organism from desiccation. Scientists suggest that the colonies of Beltanelliformis and macroalgae from Ediacaran deposits were able to survive subaerial exposure for short periods of time and therefore could inhabit not only marine, but also in freshwater and intertidal environments. According to the researchers, the study of biomarkers of other Ediacaran macroorganisms may be a key to unraveling the mystery of the Ediacara biota.