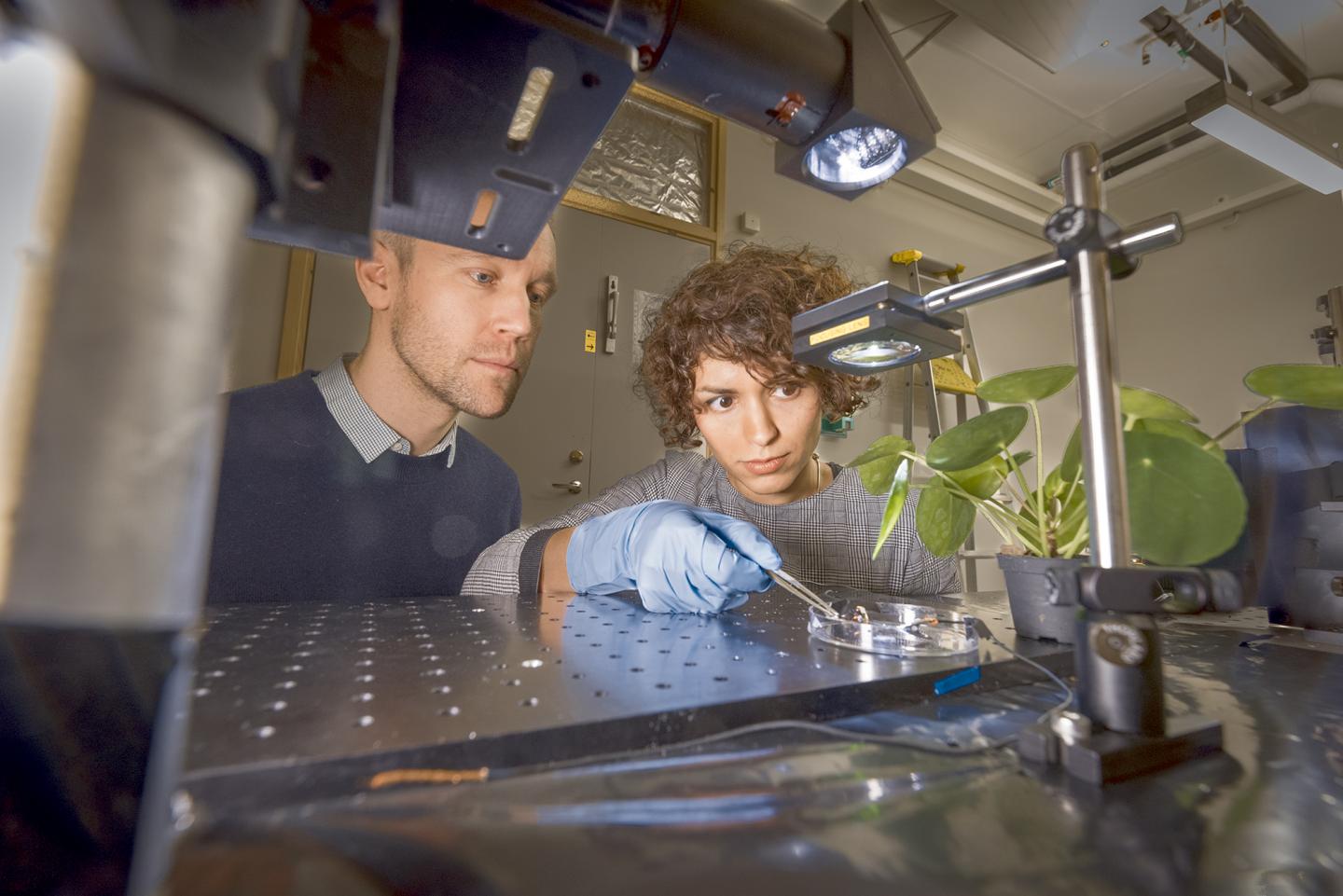 This is Magnus Jonsson and Mina Shiran Chaharsoughi at the Laboratory of Organic Electronics, Linköping University. Credit: Thor Balkhed

It may in the future be possible to harvest energy with the aid of leaves fluttering in the wind. Researchers at the Laboratory of Organic Electronics at Linköping University have developed a method and a material that generate an electrical impulse when the light fluctuates from sunshine to shade and vice versa.

“Plants and their photosynthesis systems are continuously subjected to fluctuations between sunshine and shade. We have drawn inspiration from this and developed a combination of materials in which changes in heating between sunshine and shade generate electricity,” says Magnus Jonsson, docent and principal investigator for the research group in organic photonics and nano-optics at the Laboratory of Organic Electronics, Linköping University.

The results, which have been verified in both experiments and computer simulations, have been published in Advanced Optical Materials.

Together with researchers from the University of Gothenburg, Magnus Jonsson and his team have previously developed small nanoantennas that absorb sunlight and generate heat. They published an article together in Nano Letters in 2017, describing how the antennas when incorporated into window glass could reduce cold downdraughts and save energy. The antennas, with dimensions in the order of tens of nanometers, react to near infrared light and generate heat.

Mina Shiran Chaharsoughi, PhD student in Magnus Jonsson’s group, has now developed the technology further and created a tiny optical generator by combining the small antennas with a pyroelectric film.

“Pyroelectric” means that an electrical voltage develops across the material when it is heated or cooled. The change of temperature causes charges to move and the generation of an electric current in the circuit.

The antennas consist of small metal discs, in this case gold nanodiscs, with a diameter of 160 nm (0.16 micrometres). They are placed on a substrate and coated with a polymeric film to create the pyroelectric properties.

“The nanoantennas can be manufactured across large areas, with billions of the small discs uniformly distributed over the surface. The spacing between discs in our case is approximately 0.3 micrometres. We have used gold and silver, but they can also be manufactured from aluminium or copper,” says Magnus Jonsson.

The antennas generate heat that is then converted to electricity with the aid of the polymer. It is first necessary to polarize the polymer film in order to create a dipole across it, with a clear difference between positive and negative charge. The degree of polarisation affects the magnitude of the generated power, while the thickness of the polymer film seems not to have any effect at all.

“We force the polarisation into the material, and it remains polarised for a long time,” says Mina Shiran Chaharsoughi.

Mina Shiran Chaharsoughi carried out an experiment in order to demonstrate the effect clearly, holding a twig with leaves in the air flow from a fan. The motion of the leaves created sunshine and shade on the optical generator, which in turn produced small electrical pulses and powered an external circuit.

“The research is at an early stage, but we may in the future be able to use the natural fluctuations between sunshine and shade in trees to harvest energy,” says Magnus Jonsson.