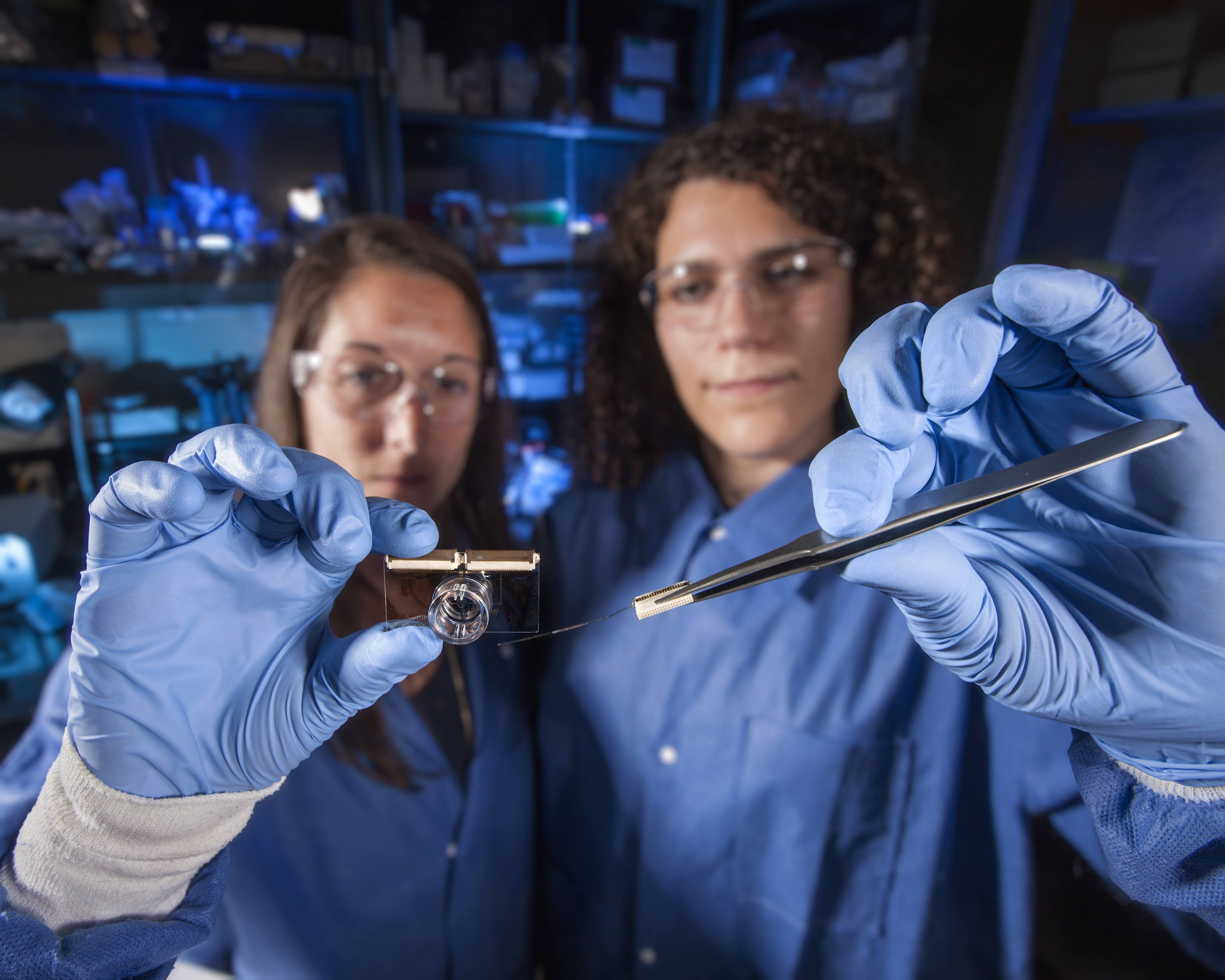 Lawrence Livermore National Laboratory (LLNL) scientists and engineers have developed a “brain-on-a-chip” device aimed at testing and predicting the effects of biological and chemical agents, disease or pharmaceutical drugs on the brain over time without the need for human or animal subjects.

The device, part of the Lab’s iCHIP (in-vitro Chip-Based Human Investigational Platform) project, simulates the central nervous system by recording neural activity from multiple brain cell types deposited and grown onto microelectrode arrays. The platform, described in the journal PLOS One(link is external), could help scientists understand how brain cells connect and interact, combat brain disorders, determine how soldiers are affected by exposure to chemical and biological weapons and develop antidotes to counteract those effects.

“While we’re not close to the point where we can fully recapitulate a brain outside of the body, this is an important step in terms of increasing complexity of these devices and moving in the right direction,” said co-lead author and LLNL research engineer Dave Soscia. “The idea is that eventually the community gets to a point where people are confident enough in the devices that the effects they see from putting chemicals or pharmaceutical drugs into the platform environment are similar to the results we would see in the human body.”

To recreate the regions of the brain, researchers divided the chip into four distinct areas -- three sub-regions and an external region representing the brain’s cortex. Researchers deposited primary hippocampal and cortical cells onto the electrodes, positioned based on their relative orientation in the brain, using custom-built inserts that can be removed after the cells are placed in the device to allow free communication among the different regions. The team then monitored the cells’ action potential patterns -- the “bursts” of electrical energy that cells emit when communicating -- and observed how the cells interacted over time. The researchers also successfully performed tests with a four-cell insert, to prove more cell types could be used simultaneously.

Scientists said the platform is part of LLNL’s broader vision for countering emerging and existing threats, allows them to study the networks formed among various regions of the brain, and obtain timely, human-relevant data without animal or human testing. The data would be used to better predict human response to countermeasures, viruses or pharmaceutical drugs, and could help scientists determine if certain types of neurons are more susceptible to exposure.

“This allows us to come up with a platform that we can use to test how chemical agents would affect the brain,” said iCHIP principal investigator Elizabeth Wheeler. “Obviously at a high dose, we know exposure is going to be detrimental, but think about the warfighter who is exposed to a low level of chemical for a long time. Using this device in the future, we might be able to predict how that brain is going to be affected. If we understand how it’s affected, then we can develop a countermeasure to protect the warfighter.”

Researchers said the technology also is enabling them to see how cells communicate differently when combined with, or located close to, different cell types. Depositing the cells with the micro-fabricated, funnel-like insert allows the insert to be used with any type of chip platform or cell type, because it doesn’t require patterning the chip’s surface with different chemicals to adhere the cells to it. The system, Soscia said, also enables researchers to go easily from the “macro world to the micro world,” depositing multiple cell types in smaller areas than possible before.

“It was very important to us that we didn’t have physical barriers, so the cells could grow processes to interact and communicate,” Soscia said. “Here you literally just put an insert in, pipette the cells through the top of the insert, and it deposits them with precision onto specific regions on the electrode array. And because it’s removable, the cells adhere but they have nothing holding them back; they’re allowed to grow freely and communicate with the other regions.”

For this proof of concept study, the scientists analyzed rodent cells’ electrical activity for up to 30 days, reporting that the cells displayed characteristics and changes mimicking physiological responses described in literature. Based on their experiments, they predict that the brain cells could remain viable, and recordable, on a chip for much longer periods, up to several months. By comparing hippocampal and cortical neurons in mono-culture (with other cells of the same type) and in co-culture (both cell types deposited within one device), the research showed that some features from hippocampal cells, like the percentage of action potential spikes found in bursts, were significantly higher when cultured together with cortical cells.

With the brain-on-a-chip platform, Kulp said researchers could analyze how disease spreads through the brain, model epilepsy, or potentially examine the effects of chemical or biological exposure over a timespan of several months.

“You could mimic someone getting a brief exposure on a battlefield and then look at the neurons over six months and see what happens,” Kulp said. “Maybe they recover from that initial exposure, but six months from now they still have some kind of detriment. This is the only kind of system that would allow for that kind of experimentation on human cells.”

The research is continuing as part of a Strategic Initiative focused on the brain, with LLNL biologist Nick Fischer as the principal investigator. The initiative incorporates brain and blood-brain barrier chip-based platforms for applied scientific research. The next step, researchers said, is to expand the brain-on-a-chip device to three dimensions and sort through the data collected thus far to determine how it correlates with in vivo data.

“Now that we have proved the device functions and mimics certain characteristics of the brain, we need to work more closely with computer scientists, statisticians and data modelers to fully analyze the data,” Wheeler said. “It’s exciting to see this go from just an idea to a platform generating data, and now using that data to inform predictive biological models.”