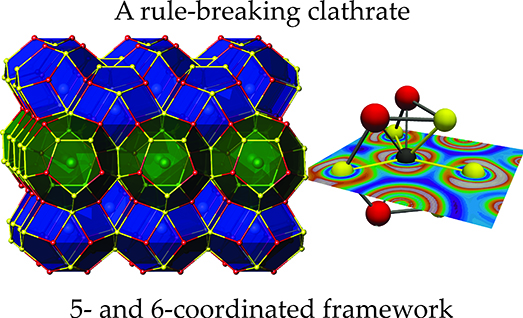 Scientists discovered a new cage or “clathrate” crystal structure (left) in which the atoms are each bonded to five or six atoms, more than previously seen in clathrates. These larger cages can hold atoms that can freely move or “rattle,” a feature that reduces the thermal conductivity of the materials. Low thermal conductivity is a vital property of materials that transform waste heat into electricity. Critical to the research is how electrons are distributed between the atoms forming chemical bonds (indicated by the color-coded bands in the right image). Source: DOE

In cage-structured compounds, the atoms surround a large open space that can be filled with other atoms or molecules, making these materials very useful in nature and for technologies. In nature, the atoms in these compounds (called clathrates) are always bonded to four other atoms. The bonds define the open volume in the cage. For the first time ever, scientists synthesized cage-structured compounds with each atom bonded to five, six, or more atoms—making the cage larger, tunable, and more technologically interesting.

The larger cages let atoms move freely, limiting how heat flows. Lower thermal conductivity makes clathrates promising to harvest waste heat and turn it into electricity. This discovery opens the door to develop new clathrate materials. These materials could enhance our understanding of the connection between a material’s structure and behavior.

Cage-like metallic compounds called clathrates have the potential to be used as thermoelectric materials for harvesting waste heat and turning it into electricity, due to their tendency to exhibit both high electrical conductivity and low thermal conductivity. Chemists working at the University of California, Davis have discovered a whole new class of clathrates, potentially opening new ways to make and apply these materials. A clathrate is a framework compound with guest atoms trapped inside—held in oversized cage structures. Because the cage is relatively large compared to the guest atom, the trapped atom can rattle around, and that means that clathrates conduct heat very poorly, a necessary characteristic of thermoelectric materials. Thermoelectrics convert heat into electricity and could potentially be used for applications from powering a watch with body heat to making vehicles more efficient by recovering waste heat from the exhaust. To date, all known clathrates have been based on a tetrahedral structure: each atom in the cage is bonded with four other atoms. Now, more than 200 years after the original clathrates were discovered, the University of California, Davis team has produced and characterized stable clathrates with atoms having five, six or more bonds. These groundbreaking materials offer the potential for new insights into the fundamental structure-property relationships of clathrates, and opportunities to create improved thermoelectrics or other functional materials.