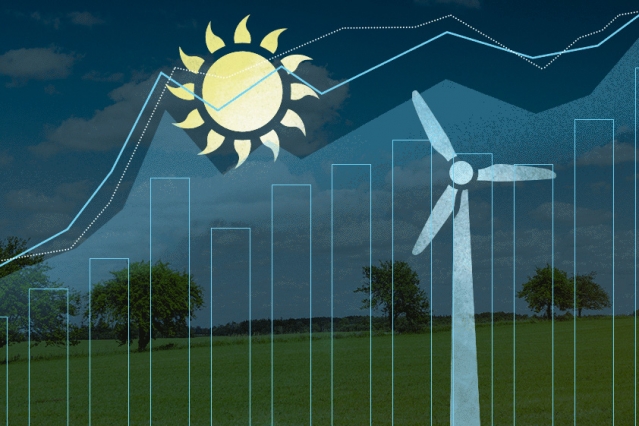 For investors, deciding whether to invest money into renewable-energy projects can be difficult. The issue is volatility: Wind-powered energy production, for instance, changes annually—and even weekly or daily—which creates uncertainty and investment risks. With limited options to accurately quantify that volatility, today’s investors tend to act conservatively.

Ultra Capital acquired the EverVest platform and team earlier this year, with aims of leveraging the software for its own risk analytics. The acquisition will enable the EverVest platform to expand to a broader array of sustainable infrastructure sectors, including water, waste, and agriculture projects.

“If an investor has confidence in the performance and risk they are taking, they may be willing to invest more capital into the sustainable infrastructure asset class. More capital means more projects get built,” says EverVest co-founder and former CEO Mike Reynolds MBA ’14, now director of execution at Ultra Capital. “We wanted to give people more firepower when it comes to evaluating risk.”

The strength of data

EverVest’s platform analyzes data on a variety of factors that may impact the performance of renewable-energy projects. Layout and location of a site, certain contracts, type of equipment, grid connection, weather, and operation and maintenance costs can all help predict the financial rate of return.

Today, financial analysts use Excel spreadsheets to find a flat, annual production average for the next 20 to 30 years. “It leaves a lot to the imagination,” Reynolds says. “Renewable energy is volatile and uncertain.”

By the time of its acquisition, EverVest had clients in the United States and Europe, including banks, investors, and developers for wind and solar power projects. Users enter information about their prospective project into the software, which would provide a detailed analysis of future cash-flow model, along with detailed statistical analysis of the project’s financial risks.

“It’s the strength of the data that we wanted to give to investors, banks, and developers, to get a better understanding of their assets,” Reynolds says.

Specific types of equipment and manufacturers matter, too. If an investor considers a certain type of wind turbine, “we can pull data to determine that a turbine in that location is going to need $2 million of replacement parts in year five,” Reynolds says. “In year seven, you might have a 50 percent probability that something is going to fail, potentially resulting in a shut-down of the site.”

Now at Ultra Capital, Feldman is further developing the platform. Reynolds is using it to invest in a wide array of sustainable-infrastructure projects, including solar energy projects, waste-to-energy assets, water treatment facilities, and recycling plants. “We’ve brought our technology in-house and have expanded it a great deal,” Reynolds says. “Now I get to use the software we built to make better investments.”

EverVest (formerly Cardinal Wind) began as a CSAIL research project that was refined and developed through MIT’s entrepreneurial ecosystem before going to market.

As an MIT junior in 2012, Feldman wanted to branch out from her theoretical physics coursework to focus on renewable energy. She discovered a CSAIL project, led by research scientist Una-May O’Reilly, that involved collecting and analyzing data on wind farm energy. “I showed up in [O’Reilly’s] office and begged her to let me work on the project,” Feldman says.

In a year, Feldman had designed a machine-learning algorithm that collected 30 years of wind data from airports and other sites, to predict future wind power there for the next 30 years. During that time, she sought enrollment in Course 15.366 (Energy Ventures), where students from across departments plan businesses around clean technologies. Undergraduates are seldom accepted. But as luck would have it, the class wanted O’Reilly to speak about her research—and O’Reilly told them to ask Feldman.

“I said, ‘Yes, I’m working on that research. You should just let me into the class,'” Feldman says, laughing.

Enrolling in fall 2013, Feldman pitched her algorithm to the class, and it caught the eye of one student. Reynolds had come to MIT Sloan School of Management, he says, “with scars from working on Wall Street in investment banking … and I wanted to open my horizons and work with engineers who were building amazing things at MIT.”

During his time as an investment banker, Reynolds dealt with funding large projects in infrastructure, energy, transportation. So Feldman’s prediction algorithm resonated immediately. “I saw her algorithm and thought of how great it would be for investors to have a more accurate way to measure the rate of return for a potential wind project investment,” Reynolds says.

Joining forces, Feldman and Reynolds launched Cardinal Wind in 2013. The startup was somewhat of a “happy accident,” Feldman says. “The company took an insane amount of hard work to start and build. But by showing up in a lab and convincing them to give me a job, and then bringing the research to class, we were able to determine that there was a great opportunity and need for better financial risk analysis tools in the marketplace.”

The following summer, Cardinal Wind entered the Global Founders’ Skills Accelerator (GFSA), run by the Martin Trust Center for MIT Entrepreneurship, “which was a huge boost,” Reynolds says. Mentors and entrepreneurs-in-residence offered guidance and feedback on pitches, and generous GFSA funding paid the startup’s bills. “And we worked alongside other startups going through the same challenges,” Reynolds says. “All those resources were incredibly helpful.”

By October 2015, Cardinal Wind had expanded Feldman’s algorithm into a full cash-flow modelling platform that also included analyses for solar power projects. That month, Cardinal Wind rebranded as EverVest, and this July it was acquired by Ultra Capital.

A key to EverVest’s success, Feldman says, was constantly developing the technology to fit customer needs—such as including solar power. “When we found the actual need was more than just predicting wind patterns, we departed from using that particular algorithm, and we’ve built a lot of our core platform since then,” she says.