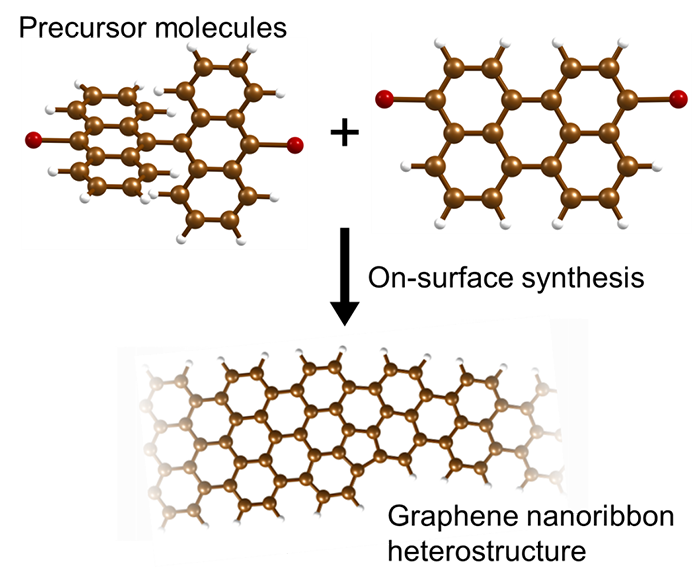 Essential electronic components, such as diodes and tunnel barriers, can be incorporated in single graphene wires (nanoribbons) with atomic precision.

The goal is to create graphene-based electronic devices with extremely fast operational speeds. The discovery was made in a collaboration between Aalto University and their colleagues at Utrecht University and TU Delft in the Netherlands. The work was published in Nature Communications.

The ‘wonder material’ graphene has many interesting characteristics, and researchers around the world are looking for new ways to utilise them. Graphene itself does not have the characteristics needed to switch electrical currents on and off and smart solutions must be found for this particular problem. “We can make graphene structures with atomic precision. By selecting certain precursor substances (molecules), we can code the structure of the electrical circuit with extreme accuracy,” explains Peter Liljeroth from Aalto University, who conceived the research project together with Ingmar Swart from Utrecht University.

The electronic properties of graphene can be controlled by synthesizing it into very narrow strips (graphene nanoribbons). Previous research has shown that the ribbon’s electronic characteristics are dependent on its atomic width. A ribbon that is five atoms wide behaves similarly to a metallic wire with extremely good conduction characteristics, but adding two atoms makes the ribbon a semiconductor. “We are now able to seamlessly integrate five atom-wide ribbons with seven atom-wide ribbons. That gives you a metal-semiconductor junction, which is a basic building block of electronic components,” according to Ingmar Swart. 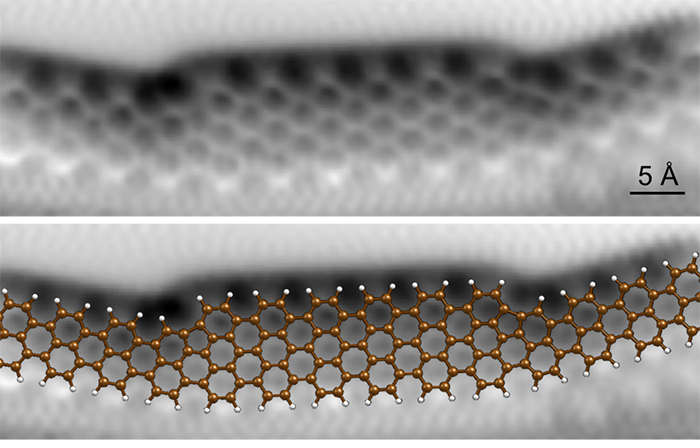 Chemistry on a surface

The researchers produced their electronic graphene structures through a chemical reaction. They evaporated the precursor molecules onto a gold crystal, where they react in a very controlled way to yield new chemical compounds. “This is a different method from that currently used to produce electrical nanostructures, such as those on computer chips. For graphene, it is so important that the structure is precise at the atomic level and it is likely that the chemical route is the only effective method,” Ingmar Swart concludes.

The researchers used advanced microscopic techniques to also determine the electronic and transport characteristics of the resulting structures. It was possible to measure electrical current through a graphene nanoribbon device with an exactly known atomic structure. “This is the first time where we can create e.g. a tunnel barrier and really know its exact atomic structure. Simultaneous measurement of electrical current through the device allows us to compare theory and experiment on a very quantitative level,” says Peter Liljeroth.