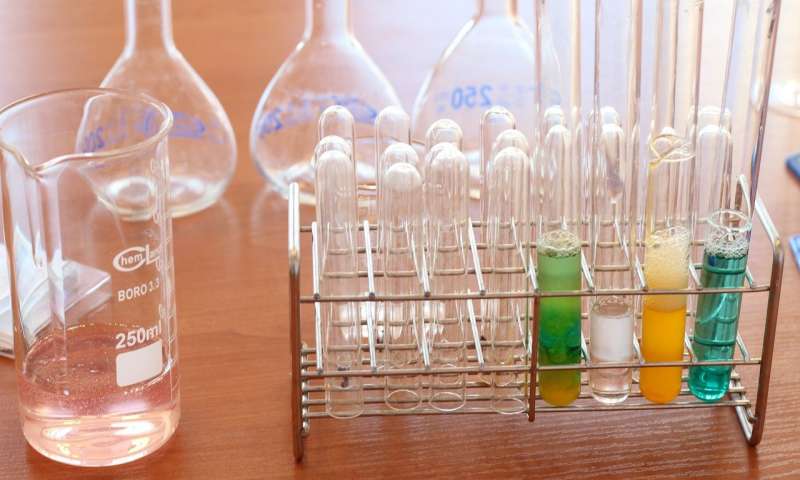 Using a novel type of chemical reaction, MIT researchers have shown that they can modify antibiotics in a way that could potentially make them more effective against drug-resistant infections.

By chemically linking the antibiotic vancomycin to an antimicrobial peptide, the researchers were able to dramatically enhance the drug’s effectiveness against two strains of drug-resistant bacteria. This kind of modification is simple to perform and could be used to create additional combinations of antibiotics and peptides, the researchers say.

“Typically, a lot of steps would be needed to get vancomycin in a form that would allow you to attach it to something else, but we don’t have to do anything to the drug,” says Brad Pentelute, an MIT associate professor of chemistry and the study’s senior author. “We just mix them together and we get a conjugation reaction.”

This strategy could also be used to modify other types of drugs, including cancer drugs, Pentelute says. Attaching such drugs to an antibody or another targeting protein could make it easier for the drugs to reach their intended destinations.

Pentelute’s lab worked with Stephen Buchwald, the Camille Dreyfus Professor of Chemistry at MIT; Scott Miller, a professor of chemistry at Yale University; and researchers at Visterra, a local biotech company, on the paper, which appears in the Nov. 5 issue of Nature Chemistry. The paper’s lead authors are former MIT postdoc Daniel Cohen, MIT postdoc Chi Zhang, and MIT graduate student Colin Fadzen.

Several years ago, Cohen made the serendipitous discovery that an amino acid called selenocysteine can spontaneously react with complex natural compounds without the need for a metal catalyst. Cohen found that when he mixed electron-deficient selenocysteine with the antibiotic vancomycin, the selenocysteine attached itself to a particular spot—an electron-rich ring of carbon atoms within the vancomycin molecule.

This led the researchers to try using selenocysteine as a “handle” that could be used to link peptides and small-molecule drugs. They incorporated selenocysteine into naturally occurring antimicrobial peptides—small proteins that most organisms produce as part of their immune defenses. Selenocysteine, a naturally occurring amino acid that includes an atom of selenium, is not as common as the other 20 amino acids but is found in a handful of enzymes in humans and other organisms.

The researchers found that not only were these peptides able to link up with vancomycin, but the chemical bonds consistently occurred at the same location, so all of the resulting molecules were identical. Creating such a pure product is difficult with existing methods for linking complex molecules. Furthermore, doing this kind of reaction with previously existing methods would likely require 10 to 15 steps just to chemically modify vancomycin in a way that would allow it to react with a peptide, the researchers say.

“That’s the beauty of this method,” Zhang says. “These complex molecules intrinsically possess regions that can be harnessed to conjugate to our protein, if the protein possesses the selenocysteine handle that we developed. It can greatly simplify the process.”

The researchers tested conjugates of vancomycin and a variety of antimicrobial peptides (AMPs). They found that one of these molecules, a combination of vancomycin and the AMP dermaseptin, was five times more powerful than vancomycin alone against a strain of bacteria called E. faecalis. Vancomycin linked to an AMP called RP-1 was able to kill the bacterium A. baumannii, even though vancomycin alone has no effect on this strain. Both of these strains have high levels of drug resistance and often cause infections acquired in hospitals.

This approach should work for linking peptides to any complex organic molecule that has the right kind of electron-rich ring, the researchers say. They have tested their method with about 30 other molecules, including serotonin and resveratrol, and found that they could be easily joined to peptides containing selenocysteine. The researchers have not yet explored how these modifications might affect the drugs’ activity.

In addition to modifying antibiotics, as they did in this study, the researchers believe they could use this technique for creating targeted cancer drugs. Scientists could use this approach to attach antibodies or other proteins to cancer drugs, helping the drugs to reach their destination without causing side effects in healthy tissue.

Adding selenocysteine to small peptides is a fairly straightforward process, the researchers say, but they are now working on adapting the method so that it can be used for larger proteins. They are also experimenting with the possibility of performing this type of conjugation reaction using the more common amino acid cysteine as a handle instead of selenocysteine.