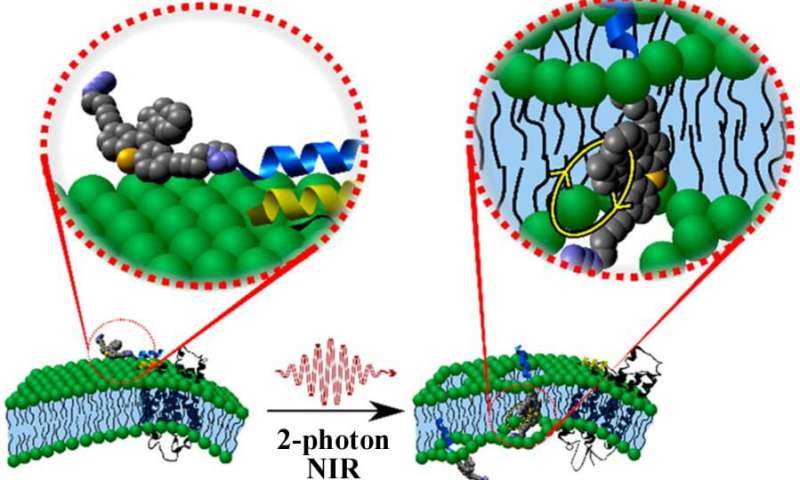 Chemists at Rice University, Durham (U.K.) University and North Carolina State University have upgraded their technique to kill cancer cells with targeted molecular motors. The light-activated motors attach themselves to cells and, when hit by near-infrared light, spin up to 3 million times per second and drill through membranes, destroying the cells within minutes. Credit: Illustration courtesy of the Tour Group/Rice University

An international team of scientists is getting closer to perfecting molecule-sized motors that drill through the surface of cancer cells, killing them in an instant.

Researchers at Rice University, Durham (U.K.) University and North Carolina State University reported their success at activating the motors with precise two-photon excitation via near-infrared light. Unlike the ultraviolet light they first used to drive the motors, the new technique does not damage adjacent, healthy cells.

The research led by chemists James Tour of Rice, Robert Pal of Durham and Gufeng Wang of North Carolina may be best applied to skin, oral and gastrointestinal cancer cells that can be reached for treatment with a laser.

In a 2017 Nature paper, the same team reported the development of molecular motors enhanced with small proteins that target specific cancer cells. Once in place and activated with light, the paddlelike motors spin up to 3 million times a second, allowing the molecules to drill through the cells’ protective membranes and killing them in minutes.

Since then, researchers have worked on a way to eliminate the use of damaging ultraviolet light. In two-photon absorption, a phenomenon predicted in 1931 and confirmed 30 years later with the advent of lasers, the motors absorb photons in two frequencies and move to a higher energy state, triggering the paddles.

“Multiphoton activation is not only more biocompatible but also allows deeper tissue penetration and eliminates any unwanted side effects that may arise with the previously used UV light,” Pal said.

The researchers tested their updated motors on skin, breast, cervical and prostate cancer cells in the lab. Once the motors found their targets, lasers activated them with a precision of about 200 nanometers. In most cases, the cells were dead within three minutes, they reported. They believe the motors also drill through chromatin and other components of the diseased cells, which could help slow metastasis.

Because the motors target specific cells, Tour said work is underway to adapt them to kill antibiotic-resistant bacteria as well. “We continue to perfect the molecular motors, aiming toward ones that will work with visible light and provide even higher efficacies of kill toward the cellular targets,” he said.