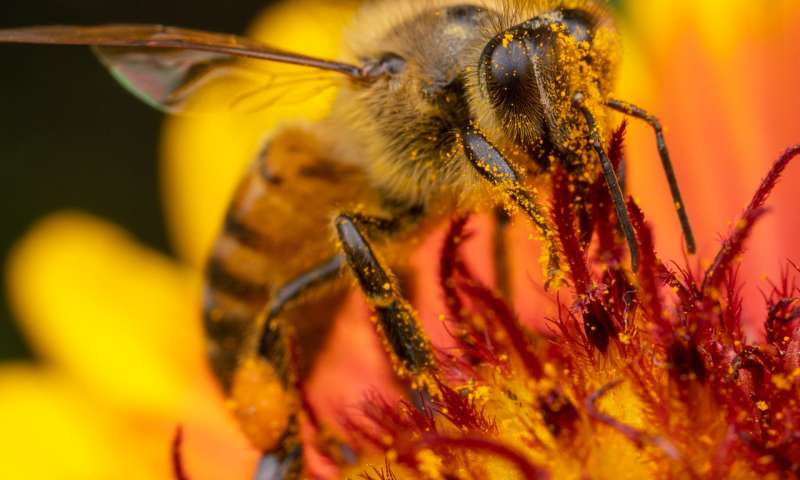 The world’s most widely used weed killer may also be indirectly killing bees. New research from The University of Texas at Austin shows that honey bees exposed to glyphosate, the active ingredient in Roundup, lose some of the beneficial bacteria in their guts and are more susceptible to infection and death from harmful bacteria.

Scientists believe this is evidence that glyphosate might be contributing to the decline of honey bees and native bees around the world.

“We need better guidelines for glyphosate use, especially regarding bee exposure, because right now the guidelines assume bees are not harmed by the herbicide,” said Erick Motta, the graduate student who led the research, along with professor Nancy Moran. “Our study shows that’s not true.”

The findings are published this week in the journal Proceedings of the National Academy of Sciences.

Because glyphosate interferes with an important enzyme found in plants and microorganisms, but not in animals, it has long been assumed to be nontoxic to animals, including humans and bees. But this latest study shows that by altering a bee’s gut microbiome—the ecosystem of bacteria living in the bee’s digestive tract, including those that protect it from harmful bacteria—glyphosate compromises its ability to fight infection.

The researchers exposed honey bees to glyphosate at levels known to occur in crop fields, yards and roadsides. The researchers painted the bees’ backs with colored dots so they could be tracked and later recaptured. Three days later, they observed that the herbicide significantly reduced healthy gut microbiota. Of eight dominant species of healthy bacteria in the exposed bees, four were found to be less abundant. The hardest hit bacterial species, Snodgrassella alvi, is a critical microbe that helps bees process food and defend against pathogens.

The bees with impaired gut microbiomes also were far more likely to die when later exposed to an opportunistic pathogen, Serratia marcescens, compared with bees with healthy guts. Serratia is a widespread opportunistic pathogen that infects bees around the world. About half of bees with a healthy microbiome were still alive eight days after exposure to the pathogen, while only about a tenth of bees whose microbiomes had been altered by exposure to the herbicide were still alive.

“Studies in humans, bees and other animals have shown that the gut microbiome is a stable community that resists infection by opportunistic invaders,” Moran said. “So if you disrupt the normal, stable community, you are more susceptible to this invasion of pathogens.”

Based on their results, Motta and Moran recommend that farmers, landscapers and homeowners avoid spraying glyphosate-based herbicides on flowering plants that bees are likely to visit.

More than a decade ago, U.S. beekeepers began finding their hives decimated by what became known as colony collapse disorder. Millions of bees mysteriously disappeared, leaving farms with fewer pollinators for crops. Explanations for the phenomenon have included exposure to pesticides or antibiotics, habitat loss and bacterial infections. This latest study adds herbicides as a possible contributing factor.

“It’s not the only thing causing all these bee deaths, but it is definitely something people should worry about because glyphosate is used everywhere,” said Motta.

Native bumble bees have microbiomes similar to honey bees, so Moran said it’s likely that they would be affected by glyphosate in a similar way.