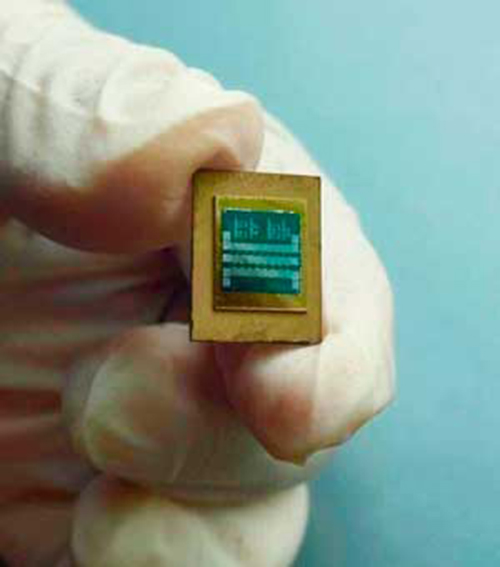 A test sample comprised of a thermal chip, a heat spreader, and a microcooler demonstrates the efficiency of diamond for removing heat from hotspots in semiconductor electronics. Image: © 2016 A*STAR Institute of Microelectronics

Powerful electronic components can get very hot. When many components are combined into a single semiconductor chip, heating can become a real problem. An overheating electronic component wastes energy and is at risk of behaving unpredictably or failing altogether. Consequently, thermal management is a vital design consideration.

This becomes particularly important in devices made from gallium nitride. “Gallium nitride is capable of handling high voltages, and can enable higher power capability and very large bandwidth,” says Yong Han from the A*STAR Institute of Microelectronics. “But in a gallium nitride transistor chip, the heat concentrates on tiny areas, forming several hotspots.” This exacerbates the heating problem.

Han and co-workers demonstrate both experimentally and numerically that a layer of diamond can spread heat and improve the thermal performance of gallium nitride devices.

The researchers created a thermal test chip that contained eight tiny hotspots, each 0.45 by 0.3 millimeters in size, to generate the heat created in actual devices. They bonded this chip to a layer of high quality diamond fabricated using a technique called chemical vapor deposition. The diamond heat spreader and test chip were connected using a thermal compression bonding process. This was then connected to a microcooler, a device consisting of a series of micrometer-wide channels and a micro-jet impingement array. Water impinges on the heat source wall, and then passes through the micro-channels to remove the heat and keep the structure cool.

Han and the team tried their device by generating 10 to 120 Watts of heating power in test chips of 100 and 200-micrometer thickness. To dissipate the heating power, the diamond heat spreading layer and microcooler helped maintain the structure at a temperature below 160 degrees Celsius. In fact, the maximum chip temperature was 27.3 percent lower than another device using copper as the heat spreading layer, and over 40 percent lower than in a device with no spreading layer.

The experimental results were further confirmed by thermal simulations. The simulations also indicated that the performance could be improved further by increasing the thickness of the diamond layer, and that good bonding quality between the gallium nitride chip and the diamond heat spreader was crucial to obtain the best performance.

“We next hope to develop a novel micro-fluid cooler of higher and more uniform cooling capability, and to achieve thermal management using a diamond layer of high thermal conductivity near an electronic gate,” says Han.

The A*STAR-affiliated researchers contributing to this research are from the Institute of Microelectronics.