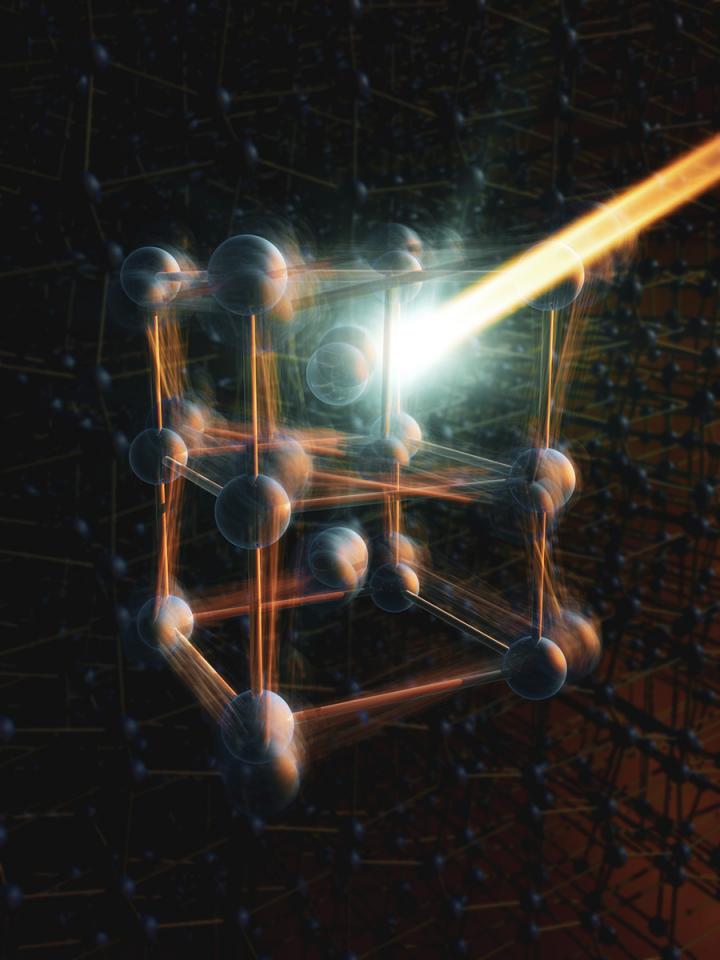 Phase transitions are common occurrences that dramatically change the properties of a material, the most familiar being the solid-liquid-gas transition in water. Each phase corresponds to a new arrangement of the atoms within the material, which dictate the properties of the substance. While these arrangements can be easily studied in each phase individually, it is significantly harder to study how they change their arrangements from one state to the other during a phase transition. This is because atoms are incredibly small, and the distances by which they move are correspondingly tiny and, as a result, they can occur very quickly. Furthermore, materials consist of over 1023 atoms, making it extremely challenging to track their individual motions.

One particularly intriguing phase change is the insulator-metal transition in the material Vanadium Dioxide (VO2). At room temperature VO2 is an insulator, and inside the crystal, the vanadium ions form periodic chains of vanadium pairs, known as dimers. When this compound is heated to just above room temperature, the atomic structure changes and the pairs are broken, but the material remains a solid. At the same time, the conductivity of the material increases by over 5 orders of magnitude and has a diverse range of applications from energy-free climate control to infrared sensing.

One of the intriguing properties of VO2 is that the phase transition can occur incredibly rapidly with the only limit appearing to be how fast you can heat the system. In order to explain this incredible speed, scientists suggested that there must be cooperative motion between the vanadium ions, i.e. each vanadium pair breaks in the same way at the same time.

In order to understand atomic structure of materials, scientists use a technique known as diffraction. Over the past 30 years, this method has been extended to include time resolution, with the goal of obtaining the “molecular movie”, i.e. to directly film the motion of the atoms during the transition. When this technique was first applied to VO2 in 2007, it seemed to confirm the picture of coordinated motion.

However, diffraction only measures the average atomic position and reveals little information about the actual path taken by the individual atoms involved. For example, protestors marching down the avenue Passeig de Gràcia in Barcelona move in a uniform, regular coordinated fashion, whereas a group of tourists may cover the same distance, on average, but in a completely uncoordinated fashion, wondering around and randomly halting to look at the architecture of the city. In diffraction, these processes would look the same.

To do this the researchers made use of the world’s first X-ray laser situated in the SLAC National Accelerator Laboratory. This new light source enabled researchers to examine the crystal structure with unprecedented details using a technique known as total X-ray scattering. In contrast to the prevailing view, the authors found that the break-up of the vanadium pairs was extremely disorderly and more like the tourists, than the marchers.

As Simon Wall, first author of the paper comments “This is the first time we have really been able to observe how atoms re-arrange in a phase transition without assuming the motion is uniform and suggests that the text book understanding of these transitions needs to be re-written. We now plan to use this technique to explore more materials to understand how wide-spread the role of disorder is”.

To date, VO2 has often been used as a guide for understanding the phases in more complex materials such as high temperature superconductors. Thus the lessons learnt here suggest that these materials will also need to be re-examined. Furthermore, understanding the role of disorder in vibrational materials could imply a new perspective on how to control matter, especially in the field of superconductivity, which could have major implications for nano-technology and optoelectronics.