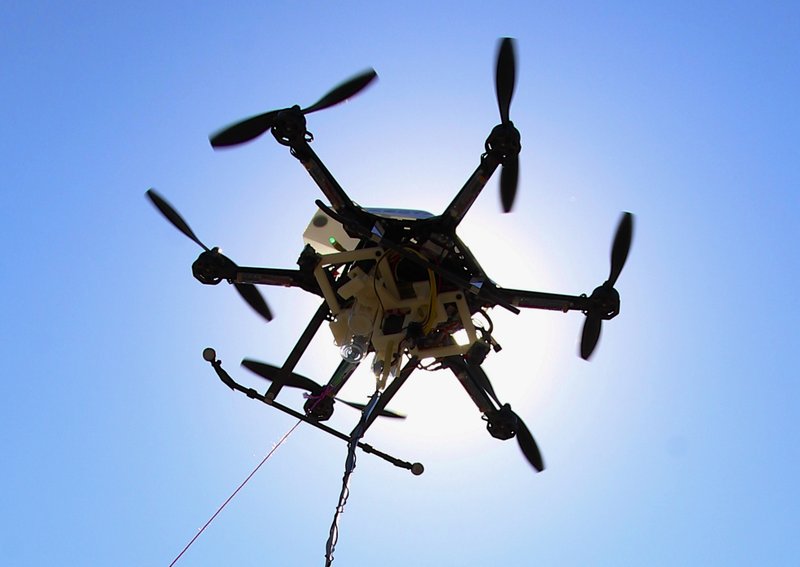 This Friday, Sept. 6, 2013, file photo shows a drone at a testing site in Lincoln, Neb. An experimental study in Sweden suggests drones equipped with heart defibrillators could help with response times for out-of-hospital cardiac arrest. Drones arrived at the scene of cardiac arrests almost 17 minutes faster on average than ambulances in a study in rural Sweden. (AP Photo/Nati Harnik, File)

Researchers tested the idea and found drones arrived at the scene of 18 cardiac arrests within about 5 minutes of launch. That was almost 17 minutes faster on average than ambulances – a big deal for a condition where minutes mean life or death.

Drone-delivered devices weren’t used on patients in the preliminary study, but the results are “pretty remarkable” and proof that the idea is worth exploring, said Dr. Clyde Yancy, a former American Heart Association president who was not involved in the study.

Cardiac arrest is a leading cause of death worldwide, killing more than 6 million people each year. Most happen at home or in other nonmedical settings and most patients don’t survive.

“Ninety percent of people who collapse outside of a hospital don’t make it. This is a crisis and it’s time we do something different to address it,” said Yancy, cardiology chief at Northwestern University’s medical school in Chicago.

The researchers reached the same conclusion after analyzing cardiac arrest data in Sweden, focusing on towns near Stockholm that don’t have enough emergency medical resources to serve summer vacationers. The analysis found an emergency response time of almost 30 minutes and a survival rate of zero, said lead author Andreas Claesson, a researcher at the Center for Resuscitation Science at Karolinska Institute in Stockholm.

To see if care could be improved, Claesson’s team turned to drones.

Drones are increasingly being tested or used in a variety of settings, including to deliver retail goods to consumers in remote areas, search for lost hikers and help police monitor traffic or crowds. Using them to speed medical care seemed like a logical next step, Claesson said.

The study was done last October and was published Tuesday in the Journal of the American Medical Association.

More than 350,000 Americans had a cardiac arrest in a nonmedical setting last year, the American Heart Association says. The condition is often confused with heart attacks but they’re different.

Heart attacks occur when a clot or other blockage stops blood flow to the heart. Cardiac arrest occurs when electrical impulses controlling the heart’s rhythmic pumping action suddenly malfunction. The heartbeat becomes very irregular or stops, preventing blood from reaching vital organs. Death can occur within minutes without treatment to restore a normal heartbeat, ideally CPR and use of a defibrillator.

The researchers used a small heart defibrillator weighing less than two pounds, featuring an electronic voice that gives instructions on how to use the device. It was attached to a small drone equipped with four small propeller-like rotors, a global positioning device and camera.

They launched the drone from a fire station within about 6 miles (10 kilometers) from homes where people had previous cardiac arrests.

In the study’s video footage simulating a rescue, a drone soars over residential rooftops and then lands gently in a backyard. A man dashes out of the house, grabs the defibrillator and carries it inside.

There were no crashes or other mishaps during the study, Claesson said. He plans a follow-up study to test drone-delivered defibrillators for bystanders to use in real-life cardiac arrests.

The test results show “a great potential for saving lives,” he said.