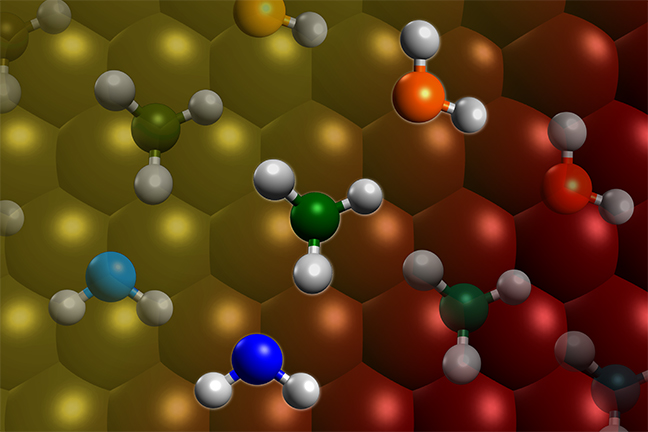 A team of researchers from the University of Minnesota and University of Massachusetts Amherst has discovered new technology that can speed up chemical reactions 10,000 times faster than the current reaction rate limit. These findings could increase the speed and lower the cost of thousands of chemical processes used in developing fertilizers, foods, fuels, plastics, and more.

The research is published online in ACS Catalysis, a leading journal of the American Chemical Society.

In chemical reactions, scientists use what are called catalysts to speed reactions. A reaction occurring on a catalyst surface, such as a metal, will speed up, but it can only go as fast as permitted by what is called the Sabatier’s principle. Often called the “Goldilocks principle” of catalysis, the best possible catalyst aims to perfectly balance two parts of a chemical reaction. Reacting molecules should stick to a metal surface to react neither too strong nor too weakly, but “just right.” Since this principle was established quantitatively in 1960, the Sabatier maximum has remained the catalytic speed limit.

Researchers of the Catalysis Center for Energy Innovation, funded by the U.S. Department of Energy, found that they could break the speed limit by applying waves to the catalyst to create an oscillating catalyst. The wave has a top and bottom, and when applied, it permits both parts of a chemical reaction to occur independently at different speeds. When the wave applied to the catalyst surface matched the natural frequency of a chemical reaction, the rate went up dramatically via a mechanism called “resonance.”

“We realized early on that catalysts need to change with time, and it turns out that kilohertz to megahertz frequencies dramatically accelerate catalyst rates,” said Paul Dauenhauer, a professor of chemical engineering and materials science at the University of Minnesota and one of the authors of the study.

The catalytic speed limit, or Sabatier maximum, is only accessible for a few metal catalysts. Other metals that have weaker or stronger binding exhibit slower reaction rate. For this reason, plots of catalyst reaction rate versus metal type have been called “volcano-shaped plots” with the best static catalyst existing right in the middle at the volcano peak.

“The best catalysts need to rapidly flip between strong and weak binding conditions on both sides of the volcano diagram,” said Alex Ardagh, post-doctoral scholar in the Catalysis Center for Energy Innovation. “If we flip binding strength quickly enough, catalysts that jump between strong and weak binding actually perform above the catalytic speed limit.”

The ability to accelerate chemical reactions directly affects thousands of chemical and materials technologies used to develop fertilizers, foods, fuels, plastics, and more. In the past century, these products have been optimized using static catalysts such as supported metals. Enhanced reaction rates could significantly reduce the amount of equipment required to manufacture these materials and lower the overall costs of many everyday materials.

Dramatic enhancement in catalyst performance also has the potential to scale down systems for distributed and rural chemical processes. Due to cost savings in large-scale conventional catalyst systems, most materials are only manufactured in enormous centralized locations such as refineries. Faster dynamic systems can be smaller processes, which can be located in rural locations such as farms, ethanol plants, or military installations.

“This has the potential to completely change the way we manufacture almost all of our most basic chemicals, materials, and fuels,” said Professor Dionisios Vlachos, director of the Catalysis Center for Energy Innovation. “The transition from conventional to dynamic catalysts will be as big as the change from direct to alternating current electricity.”