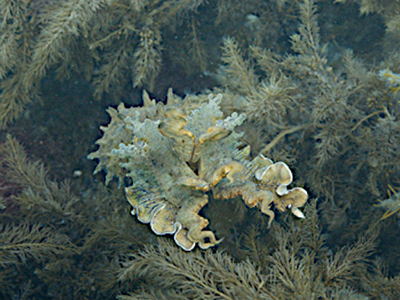 For the octopus and cuttlefish, instantaneously changing their skin color and pattern to disappear into the environment is just part of their camouflage prowess. These animals can also swiftly and reversibly morph their skin into a textured, 3D surface, giving the animal a ragged outline that mimics seaweed, coral, or other objects it detects and uses for camouflage.

This week, engineers at Cornell University report on their invention of stretchable surfaces with programmable 3D texture morphing, a synthetic “camouflaging skin” inspired by studying and modeling the real thing in octopus and cuttlefish. The engineers, along with collaborator and cephalopod biologist Roger Hanlon of the Marine Biological Laboratory (MBL), Woods Hole, report on their controllable soft actuator in the October 13 issue of Science.

Led by James Pikul and Rob Shepherd, the team’s pneumatically activated material takes a cue from the 3D bumps, or papillae, that cephalopods can express in one-fifth of a second for camouflage, and then retract to swim away with minimal hydrodynamic drag.  (See videobelow of live Octopus rebescens expressing its skin papillae.)

“Lots of animals have papillae, but they can’t extend and retract them instantaneously as octopus and cuttlefish do,” says Hanlon, who is the leading expert on cephalopod dynamic camouflage. “These are soft-bodied molluscs without a shell; their primary defense is their morphing skin.”

Papillae are examples of a muscular hydrostat, biological structures consisting of muscle with no skeletal support (such as the human tongue). Hanlon and members of his laboratory, including Justine Allen, now at Brown University, were the first to describe the structure, function, and biomechanics of these morphing 3D papillae in detail (see references, below).

“The development of this material is an excellent example of the applications that can derive from studying the fundamental biology of marine organisms,” says MBL Director of Research David Mark Welch.

“The degrees of freedom in the papillae system are really beautiful,” Hanlon says. “In the European cuttlefish, at least nine sets of papillae are independently controlled by the brain. And each papilla goes from a flat, 2D surface through a continuum of shapes until it reaches its final shape, which can be conical or one of a dozen possible shapes. It depends on how the muscles in the hydrostat are arranged.”

“Engineers have developed a lot of sophisticated ways to control the shape of soft, stretchable materials, but we wanted to do it in a simple way that was fast, strong, and easy to control,” says lead author James Pikul, currently an assistant professor in the Department of Mechanical Engineering and Applied Mechanics at the University of Pennsylvania. “We were drawn by how successful cephalopods are at changing their skin texture, so we studied and drew inspiration from the muscles that allow cephalopods to control their texture, and implemented these ideas into a method for controlling the shape of soft, stretchable materials.”

“This is a classic example of bio-inspired engineering” with a range of potential applications, Hanlon says. For example, the material could be controllably morphed to reflect light in its 2D spaces and absorb light in its 3D shapes. “That would have applications in any situation where you want to manipulate the temperature of a material,” he says.

Octopus and cuttlefish only express papillae for camouflage purposes, Hanlon says, and not for locomotion, sexual signaling, or aggression. “For fast swimming, the animal would benefit from smooth skin. For sexual signaling, it wouldn’t want to look like a big old wart; it wants to look attractive, like a cool-looking mate. Or if it wanted to conduct a fight, the papillae would not be a good visual to put into the fight. Signaling, by definition, has to be highly conspicuous, unambiguous signals. The papillae would only make it the opposite!”