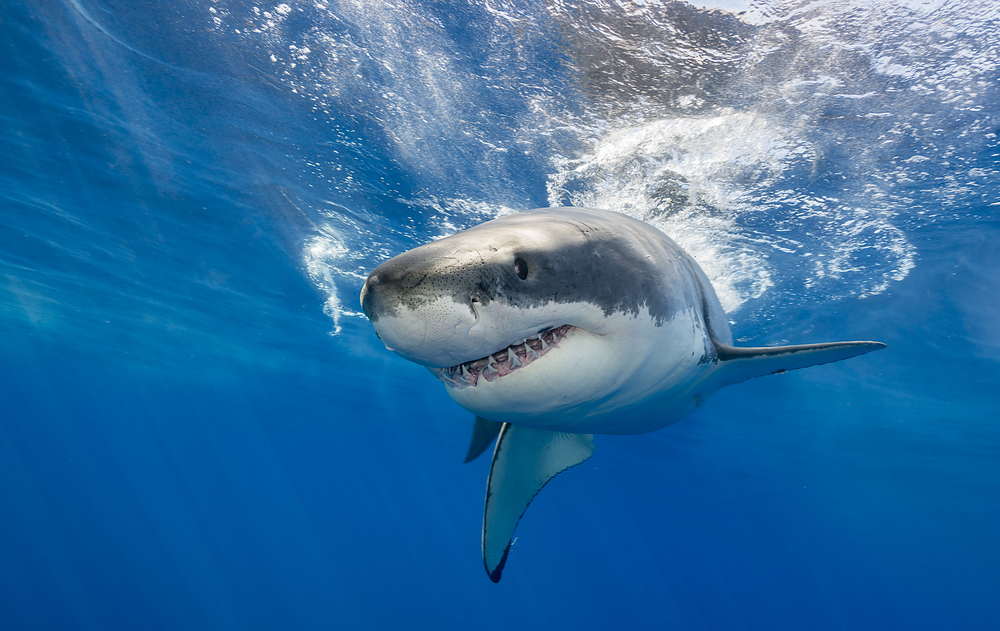 Imagine having superhuman hearing. You’re at a noisy, cocktail party and yet your ears can detect normally inaudible sounds made by your friends’ muscles as they lean in to dish the latest gossip. But, unlike normal hearing, each of these sounds causes your ears to react in the same way. There is no difference between the quietest and loudest movements. To your superhuman ears, they all sound loud, like honking horns. According to a study funded by the National Institutes of Health, that may be how a shark’s electrosensing organ reacts when it detects teensy, tiny electrical fields emanating from nearby prey.

“Sharks have this incredible ability to pick up nanoscopic currents while swimming through a blizzard of electric noise. Our results suggest that a shark’s electrosensing organ is tuned to react to any of these changes in a sudden, all-or-none manner, as if to say, ‘attack now,'” said David Julius, Ph.D., professor and chair of physiology at the University of California, San Francisco and senior author of the study published in Nature. His team studies the cells and molecules behind pain and other sensations. For instance, their results have helped scientists understand why chili peppers feel hot and menthol cool.

Led by post-docs Nicholas W. Bellono, Ph.D. and Duncan B. Leitch, Ph.D., Dr. Julius’ team showed that the shark’s responses may be very different from the way the same organ reacts in skates, the flat, winged, evolutionary cousins of sharks and sting rays, and this may help explain why sharks appear to use electric fields strictly to locate prey while skates use them to find food, friends, and mates. They also showed how genes that encode for proteins called ion channels may control the shark’s unique “sixth sense.”

“Ion channels essentially make the nervous system tick. They play a major role in controlling how information flows through a nervous system. Mutations in ion channels can be devastating and have been linked to a variety of disorders, including cystic fibrosis and some forms of epilepsy, migraines, paralysis, blindness and deafness,” said Nina Schor, M.D., Ph.D., deputy director at NIH’s National Institute of Neurological Disorders and Stroke. “Studies like this highlight the role a single ion channel can play in any nervous system, shark, skate, or human.”

In both sea creatures, networks of organs, called ampullae of Lorenzini, constantly survey the electric fields they swim through. Electricity enters the organs through pores that surround the animals’ mouths and form intricate patterns on the bottom of their snouts. Once inside, it is carried via a special gel through a grapevine of canals, ending in bunches of spherical cells that can sense the fields, called electroreceptors. Finally, the cells relay this information onto the nervous system by releasing packets of chemical messengers, called neurotransmitters, into communication points, or synapses, made with neighboring neurons.

For decades scientists knew that minute changes in electric fields stimulated a graded range of wavy currents in skate cells, much like the way our ears react to sounds. Larger fields stimulated bigger currents while smaller fields induced smaller responses. And, last year, Drs. Bellono and Leitch showed how genes for proteins called ion channels controlled the responses. But few had looked at how shark cells had reacted.

In this study, the team compared currents recorded from little skate electroreceptor cells with those from the chain catshark. They found that although both cells were sensitive to the same narrow range of voltage zaps, the responses were very different. Shark currents were much bigger than skate currents and they were the same size and waviness for each zap. In contrast, the skate cells responded with currents that varied in both size and waviness to each zap.

Further experiments suggested that these contrasting responses may be due to different ion channels genes, which encode proteins that form tunnels in a cell’s membrane, or skin. When activated the tunnels open and create electrical currents by allowing ions, or charged molecules, to flow in and out of the cell.

Drs. Bellono and Leitch showed that while both shark and skate electroceptors may have used the same type of voltage sensitive, calcium conducting ion channels to sense the zaps, they appeared to use very different types of potassium conducting ion channels to shape the responses. Their results suggested that shark cells used a special voltage activated channel that supported large repetitive responses while the skate cells used a calcium activated channel that tended to dampen the initial currents.

In addition, they suggested that the voltages at which the cells electrically rested may also have contributed to the responses. The shark’s voltage was slightly lower than the skate’s and in a range that could have primed the calcium ion channels to respond with stronger currents.

These differences also affected how the electroreceptors relayed information to the rest of the nervous system. The results suggested that shark electroreceptors basically released the same number of neurotransmitter packets, regardless of the size of the voltage zaps. In contrast, bigger zaps caused skate cells to send more messages and smaller zaps less.

“In almost every way, the shark electrosensory system looks like the skate’s and so we expected the shark cells to respond in a graded manner,” said Dr. Bellono. “We were very surprised when we found that the shark system reacts completely differently to stimuli.”

Ultimately, these differences affected how sharks and skates reacted to electric fields that mimicked those produced by prey. To test this, the researchers exposed sharks and skates swimming alone in tanks to a wide range of low voltage electric field frequencies and then measured their breathing rates. As anticipated, the skates had a variety of reactions. Some frequencies caused their breathing rates to rise above rest while others produced minimal changes. The results may help explain why a previous study found that skates may use their electrosensory perceptions to detect both prey and mates.

And the sharks? They basically had one simple reaction. Almost every field raised their breathing rates to a level seen when they smelled food, suggesting their system is tuned for one thing: catching prey.

So why, did a pain and chili pepper researcher decide to study sharks?

“In short, it’s cool!” said Dr. Julius. “We’re on a mission to understand how the nervous system controls pain and other sensations. Sharks and skates have a unique sensory system that detects electrical fields. Although humans do not share this experience, you can learn a lot from studying unique, or extreme, systems in nature. It’s also a captivating way to learn about how evolution shapes the senses.”