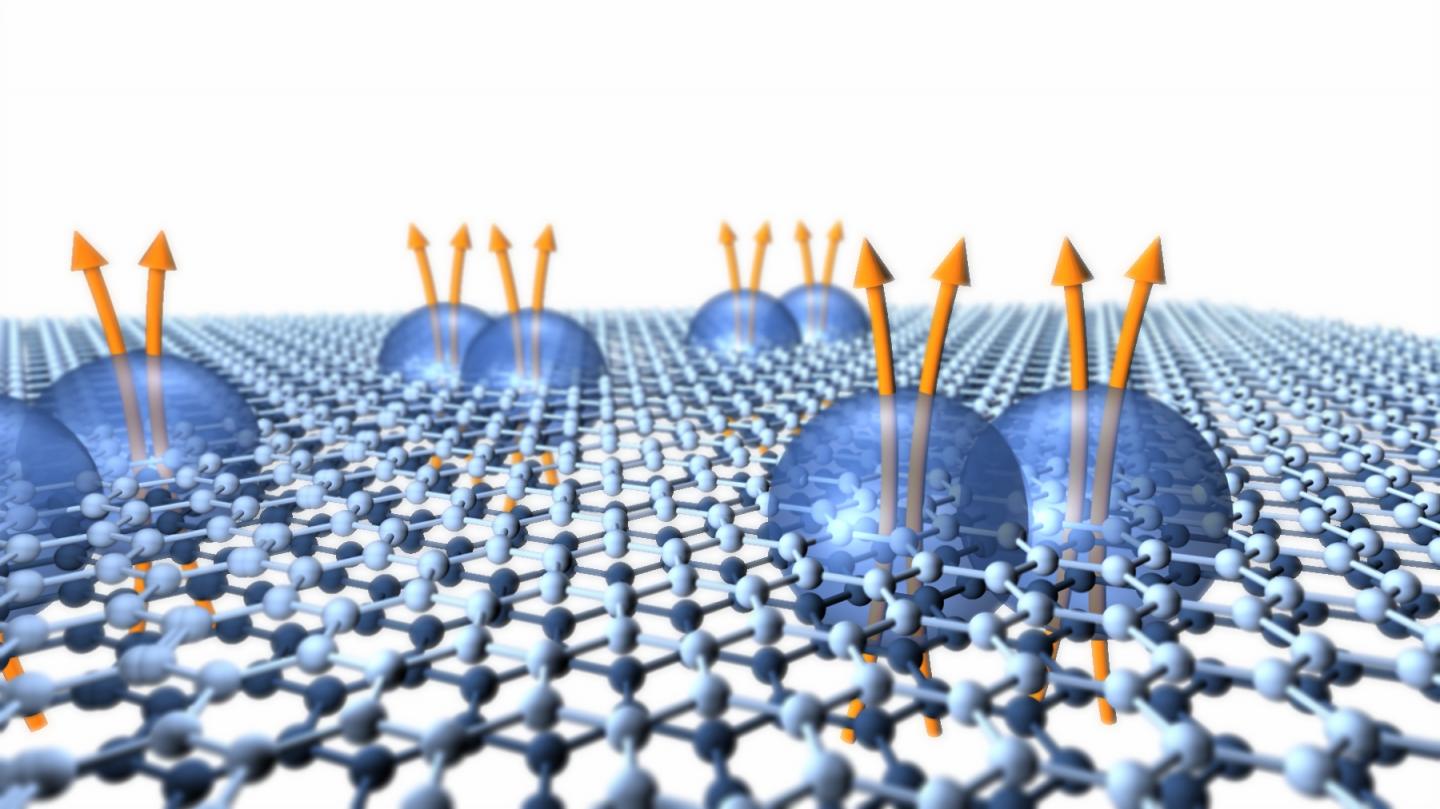 The so-called 5/2 state has confounded scientists for several decades. While all known particles in the universe are classified as either bosons or fermions, the 5/2 state, which emerges only in a 2-D electron gas under large magnetic fields, is thought to be an exotic new type of particle that doesn’t fit either description. Previously this state has been observed only in the highest mobility semiconductor heterostructures when cooled to milikelvin temperatures, making it challenging to confirm its expected properties. Recently however, researchers at Columbia found evidence of an equivalent state in bilayer graphene, appearing at temperatures more than 10 times larger than in conventional systems. Source: Cory Dean/Columbia University

“Observing the 5/2 state in any system is a remarkable scientific opportunity, since it encompasses some of the most perplexing concepts in modern condensed matter physics, such as emergence, quasi-particle formation, quantization, and even superconductivity,” Dean says. “Our observation that, in bilayer graphene, the 5/2 state survives to much higher temperatures than previously thought possible not only allows us to study this phenomenon in new ways, but also shifts our view of the FQH state from being largely a scientific curiosity to now having great potential for real-world applications, particularly in quantum computing.”

First discovered in the 1980s in gallium arsenide (GaAs) heterostructures, the 5/2 fractional quantum hall state remains the singular exception to the otherwise strict rule that says fractional quantum hall states can only exist with odd denominators. Soon after the discovery, theoretical work suggested that this state could represent an exotic type of superconductor, notable in part for the possibility that such a phase could enable a fundamentally new approach to quantum computation. However, confirmation of these theories has remained elusive, largely due to the fragile nature of the state; in GaAs it is observable only in the highest quality samples and even then appearing only at milikelvin temperaures (as much as 10,000 times colder than the freezing point of water).

The Columbia team has now observed this same state in bilayer graphene and appearing at much higher temperatures??reaching several Kelvin. “While it’s still 100 times colder than the freezing point of water, seeing the even-denominator state at these temperatures opens the door to a whole new suite of experimental tools that previously were unthinkable,” says Dean. “After several decades of effort by researchers all over the world, we may finally be close to solving the mystery of the 5/2.”

One of the outstanding problems in the field of modern condensed matter physics is understanding the phenomenon of “emergence,” the result of a large collection of quantum particles behaving in concert due to interactions between the particles and giving rise to new characteristics that are not a feature of the individual parts. For instance, in superconductors, a large number of electrons all collapse to a single quantum state, which can then propagate through a metal without any energy loss. The fractional quantum Hall effect is another state in which electrons collude with one another, in the presence of a magnetic field, resulting in quasiparticles with potentially exotic quantum properties.

Very difficult to predict theoretically, emergence often challenges our foundational understanding of how particles behave. For example, since any two electrons have the same charge, we think of electrons as objects that want to repel each other. However, in a superconducting metal, electrons unexpectedly pair up, forming a new object known as a cooper pair. Individual electrons scatter when moving through a metal, giving rise to resistance, but spontaneously formed cooper pairs behave collectively in such a way that they move through the material with no resistance at all.

“Think of trying to make your way through a crowd at a rock concert where everyone is dancing with a lot of energy and constantly bumping into you, compared to a ballroom dance floor where pairs of dancers are all moving in the same, carefully choreographed way, and it is easy to avoid each other,” says Dean. “One of the reasons that makes the even-denominator fractional quantum Hall effect so fascinating is that its origin is believed to be very similar to that of a superconductor, but, instead of simply forming cooper pairs, an entirely new kind of quantum particle emerges.”

According to quantum mechanics, elementary particles fall into two categories, Fermions and Bosons, and behave in very different ways. Two Fermions, such as electrons, cannot occupy the same state, which is why, for example, the electrons in atoms fill successive orbitals. Bosons, such as photons, or particles of light, can occupy the same state, allowing them to act coherently as in the light emission from a laser. When two identical particles are interchanged, the quantum mechanical wave-function describing their combined state is multiplied by a phase factor of 1 for Bosons, and -1 for Fermions.

Soon after the discovery of the fractional quantum hall effect, it was suggested on theoretical grounds that the quasiparticles associated with this state behave neither as Bosons nor Fermions but instead what is called an anyon: when anyon quasiparticles are interchanged, the phase factor is neither 1 nor -1 but is fractional. Despite several decades of effort, there still is no conclusive experimental proof confirming that these quasiparticles are anyons. The 5/2 state?a non-abelian anyon?is thought to be even more exotic. In theory, non-abelian anyons obey anyonic statistics as in other fractional quantum Hall states, but with the special feature that this phase cannot simply be undone by reversing the process. This inability to simply unwind the phase would make any information stored in the system uniquely stable, and is why many people believe the 5/2 could be a great candidate for quantum computation.

“Demonstration of the predicted 5/2 statistics would represent a tremendous achievement,” says Dean. “In many regards, this would confirm that, by fabricating a material system with just the right thickness and just the right number of electrons, and then applying just the right magnetic fields, we could effectively engineer fundamentally new classes of particles, with properties that do not otherwise exist among known particles naturally found in the universe. We still have no conclusive evidence that the 5/2 state exhibits non-abelian properties, but our discovery of this state in bilayer graphene opens up exciting new opportunities to test these theories.”

Until now, all of those conditions have needed to be not only just right but also extreme. In conventional semi-conductors, the even-denominator states are very difficult to isolate, and exist only for ultra-pure materials, at extremely low temperatures and high magnetic fields. While certain features of the state have been observable devising experiments that could investigate the state without destroying it, has been challenging.

“We needed a new platform,” says Hone. “With the successful isolation of graphene, these atomically thin layers of carbon atoms emerged as a promising platform for the study of electrons in 2D in general. One of the keys is that electrons in graphene interact even more strongly than in conventional 2D electron systems, theoretically making effects such as the even-denominator state even more robust. But while there have been predictions that bilayer graphene could host the long-sought even-denominator states, at higher temperatures than seen before, these predictions have not been realized due mostly the difficulty of making graphene clean enough.”

The Columbia team built on many years of pioneering work to improve the quality of graphene devices, creating ultra-clean devices entirely from atomically flat 2D materials: bilayer graphene for the conducting channel, hexagonal boron nitride as a protective insulator, and graphite used for electrical connections and as a conductive gate to change the charge carrier density in the channel.

A crucial component of the research was having access to the high magnetic fields tools available at the National High Magnetic Field Laboratory in Tallahassee, Fla., a nationally funded user facility with which Hone and Dean have had extensive collaborations. They studied the electrical conduction through their devices under magnetic fields up to 34 Tesla, and achieved clear observation of the even-denominator states.

“By tilting the sample with respect to the magnetic field, we were able to provide new confirmation that this FQH state has many of the properties predicted by theory, such as being spin-polarized,” says Jia Li, the paper’s lead author and post-doctoral researcher working with Dean and Hone. “We also discovered that in bilayer graphene, this state can be manipulated in ways that are not possible in conventional materials.”

The Columbia team’s result, which demonstrates measurement in transport–how electrons flow in the system–is a crucial step forward towards confirming the possible exotic origin of the even denominator state. Their findings are reported contemporaneously with a similar report by a research group at University of California, Santa Barbara. The UCSB study observed the even denominator state by capacitance measurement, which probes the existence of an electrical gap associated with the onset of the state.

The team expects that the robust measurements they have now observed in bilayer graphene will enable new experiments that could definitively prove its non-abelian nature. Once this is established, the team hopes to begin demonstrating computation using the even denominator state.

“For many decades now it has been thought that if the 5/2 state does indeed represent a non-abelian anyon, it could theoretically revolutionize efforts to build a quantum computer,” Dean observes. “In the past, however, the extreme conditions necessary to see the state at all, let alone use it for computation, were always a major concern of practicality. Our results in bilayer graphene suggest that this dream may now not actually be so far from reality.”