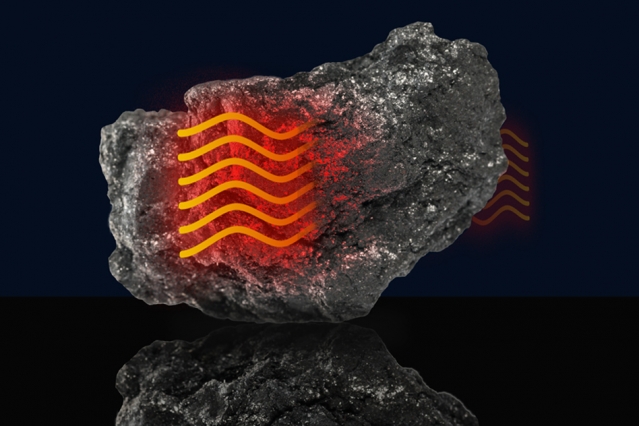 The next time you set a kettle to boil, consider this scenario: After turning the burner off, instead of staying hot and slowly warming the surrounding kitchen and stove, the kettle quickly cools to room temperature and its heat hurtles away in the form of a boiling-hot wave.

We know heat doesn’t behave this way in our day-to-day surroundings. But now MIT researchers have observed this seemingly implausible mode of heat transport, known as “second sound,” in a rather commonplace material: graphite—the stuff of pencil lead.

At temperatures of 120 kelvin, or -240 degrees Fahrenheit, they saw clear signs that heat can travel through graphite in a wavelike motion. Points that were originally warm are left instantly cold, as the heat moves across the material at close to the speed of sound. The behavior resembles the wavelike way in which sound travels through air, so scientists have dubbed this exotic mode of heat transport “second sound.”

The new results represent the highest temperature at which scientists have observed second sound. What’s more, graphite is a commercially available material, in contrast to more pure, hard-to-control materials that have exhibited second sound at 20 K (-420 F)—temperatures that would be far too cold to run any practical applications.

The discovery, published in Science, suggests that graphite, and perhaps its high-performance relative, graphene, may efficiently remove heat in microelectronic devices in a way that was previously unrecognized.

“There’s a huge push to make things smaller and denser for devices like our computers and electronics, and thermal management becomes more difficult at these scales,” says Keith Nelson, the Haslam and Dewey Professor of Chemistry at MIT. “There’s good reason to believe that second sound might be more pronounced in graphene, even at room temperature. If it turns out graphene can efficiently remove heat as waves, that would certainly be wonderful.”

The result came out of a long-running interdisciplinary collaboration between Nelson’s research group and that of Gang Chen, the Carl Richard Soderberg Professor of Mechanical Engineering and Power Engineering. MIT co-authors on the paper are lead authors Sam Huberman and Ryan Duncan, Ke Chen, Bai Song, Vazrik Chiloyan, Zhiwei Ding, and Alexei Maznev.

Normally, heat travels through crystals in a diffusive manner, carried by “phonons,” or packets of acoustic vibrational energy. The microscopic structure of any crystalline solid is a lattice of atoms that vibrate as heat moves through the material. These lattice vibrations, the phonons, ultimately carry heat away, diffusing it from its source, though that source remains the warmest region, much like a kettle gradually cooling on a stove.

The kettle remains the warmest spot because as heat is carried away by molecules in the air, these molecules are constantly scattered in every direction, including back toward the kettle. This “back-scattering” occurs for phonons as well, keeping the original heated region of a solid the warmest spot even as heat diffuses away.

However, in materials that exhibit second sound, this back-scattering is heavily suppressed. Phonons instead conserve momentum and hurtle away en masse, and the heat stored in the phonons is carried as a wave. Thus, the point that was originally heated is almost instantly cooled, at close to the speed of sound.

Previous theoretical work in Chen’s group had suggested that, within a range of temperatures, phonons in graphene may interact predominately in a momentum-conserving fashion, indicating that graphene may exhibit second sound. Last year, Huberman, a member of Chen’s lab, was curious whether this might be true for more commonplace materials like graphite.

Building upon tools previously developed in Chen’s group for graphene, he developed an intricate model to numerically simulate the transport of phonons in a sample of graphite. For each phonon, he kept track of every possible scattering event that could take place with every other phonon, based upon their direction and energy. He ran the simulations over a range of temperatures, from 50 K to room temperature, and found that heat might flow in a manner similar to second sound at temperatures between 80 and 120 K.

Huberman had been collaborating with Duncan, in Nelson’s group, on another project. When he shared his predictions with Duncan, the experimentalist decided to put Huberman’s calculations to the test.

“This was an amazing collaboration,” Chen says. “Ryan basically dropped everything to do this experiment, in a very short time.”

“We were really in the express lane with this,” Duncan adds.

Using a technique called transient thermal grating, he crossed two laser beams so that the interference of their light generated a “ripple” pattern on the surface of a small sample of graphite. The regions of the sample underlying the ripple’s crests were heated, while those that corresponded to the ripple’s troughs remained unheated. The distance between crests was about 10 microns.

Duncan then shone onto the sample a third laser beam, whose light was diffracted by the ripple, and its signal was measured by a photodetector. This signal was proportional to the height of the ripple pattern, which depended on how much hotter the crests were than the troughs. In this way, Duncan could track how heat flowed across the sample over time.

If heat were to flow normally in the sample, Duncan would have seen the surface ripples slowly diminish as heat moved from crests to troughs, washing the ripple pattern away. Instead, he observed “a totally different behavior” at 120 K.

Rather than seeing the crests gradually decay to the same level as the troughs as they cooled, the crests actually became cooler than the troughs, so that the ripple pattern was inverted—meaning that for some of the time, heat actually flowed from cooler regions into warmer regions.

“That’s completely contrary to our everyday experience, and to thermal transport in almost every material at any temperature,” Duncan says. “This really looked like second sound. When I saw this I had to sit down for five minutes, and I said to myself, ‘This cannot be real.’ But I ran the experiment overnight to see if it happened again, and it proved to be very reproducible.”

According to Huberman’s predictions, graphite’s two-dimensional relative, graphene, may also exhibit properties of second sound at even higher temperatures approaching or exceeding room temperature. If this is the case, which they plan to test, then graphene may be a practical option for cooling ever-denser microelectronic devices.

“This is one of a small number of career highlights that I would look to, where results really upend the way you normally think about something,” Nelson says. “It’s made more exciting by the fact that, depending on where it goes from here, there could be interesting applications in the future. There’s no question from a fundamental point of view, it’s really unusual and exciting.”

This research was funded in part by the Office of Naval Research, the Department of Energy, and the National Science Foundation.