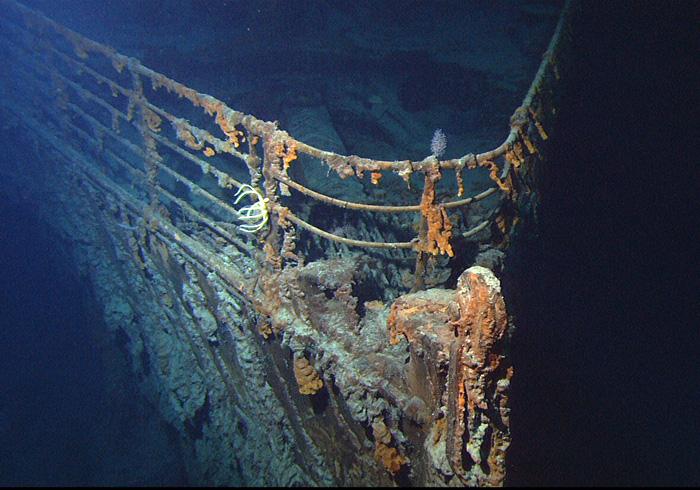 The bow of the wrecked RMS Titanic, photographed in June 2004 Courtesy of NOAA/Institute for Exploration/University of Rhode Island (NOAA/IFE/URI)

RMS Titanic has sat deep on the bottom of the North Atlantic, two miles below the surface, for more than a century. The ship was discovered in a good state of preservation, due to the inhospitable depth that helped slow corrosion.

But a newly discovered “extremophile bacteria” will eat away the remains of the hulking ship by 2030, says a new study.

Halomonas titanicae can produce an osmolyte called ectoine to regulate salinity – and to improve beneficial hydrogen bonds with surrounding water, an international team reports in the latest issue of Scientific Reports.

The team, from the Institut Laue-Langevin, the Max Planck Institute of Biochemistry and the Institut de Biologie Structurale, looked at the neutrons in the recently discovered bacterium.

They found the organism had developed a startling evolutionary adaptation to cope with harsh surroundings.

“Although (many) spectroscopic and thermodynamic investigations have been done before on ectoine, we are proud that through the use of neutrons this is the first study that has allowed a direct experimental characterization of ectoine-water-protein and ectoine-water-membrane structures to explain the mode of action of this very interesting and useful molecule,” said Joe Zaccai, emeritus scientist at the ILL.

Ectoine allows certain organisms survive extreme environments, by regulating fluid balance and cell volume, even at pressures and salinities around the Titanic.

The study finds the Halomonas titanicae produces enough ectoine to account for 20 percent of its cellular dry mass.

Average sea water has a salt concentration of 3.5 percent. But the elevated ectoine levels in the bacterium’s cells to survive salinity concentrations anywhere from 0.5 percent to 25 percent, they find.

Zacccai explained that neutrons were the best indicator of the ectoine properties, since they penetrate well without creating radiation damage, and since they are extremely sensitive.

The bacteria is rusting the metal surfaces of the legendary ship at the extreme depths.

RMS Titanic sank on April 15, 1912, after it hit an iceberg at night. The ship was discovered in 1985, more than two miles below the surface of the North Atlantic, by a team of underwater explorers. At the time, they were surprised to find it in a remarkable state of preservation, better protected than most ships that are found in shallower waters.