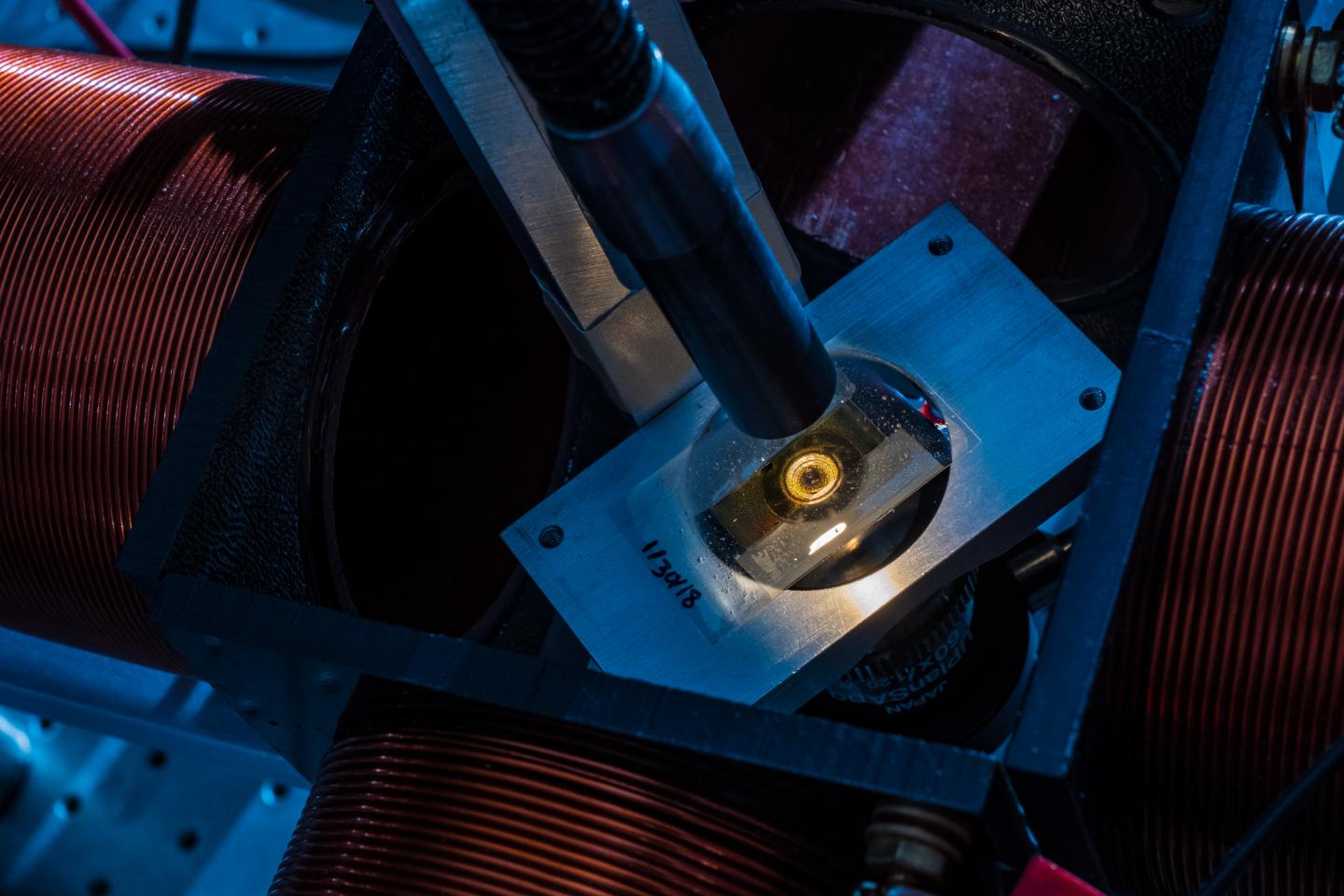 Micron-sized magnetic particles are set to go for a spin in a custom rig used by Rice University to study the effects of a spinning magnetic field on materials. Credit: Jeff Fitlow/Rice University

Spin a merry-go-round fast enough and the riders fly off in all directions. But the spinning particles in a Rice University lab do just the opposite.

Experiments in the Rice lab of chemical engineer Sibani Lisa Biswal show micron-sized spheres coming together under the influence of a rapidly spinning magnetic field. That's no surprise because the particles themselves are magnetized.

But how they come together is of interest as the particles first gather into a disorganized aggregated cluster and then into a crystal-like regimen as the magnetic field becomes stronger.

Results of the work led by Biswal and graduate student Elaa Hilou appear in Physical Review Materials. The researchers hope it will inspire ways to look at, model and create novel two-dimensional materials like tunable catalysts or colloids that can change their surface area on demand.

Experiments revealed boundaries, shapes, phase transitions and the creation and resolution of crystal-like defects as between 300 and 1,500 magnetized spheres followed their energetic impulses under the moving field's influence.

"I have been presenting this as a miniaturized version of a fidget spinner where we use the magnetic field to generate an isotropic interaction around the particles," Biswal said. "We can create particle ensembles that are loosely to very tightly packed by the strength of that interaction."

That interested Biswal and Hilou, but not as much as what they saw happening around the edges, where line tension formed by the outermost particles determined the ultimate shape of the arrays.

"Think about a soap bubble," Biswal said. "It always forms a sphere, even when you try to deform it. That's because surface tension wants to minimize its surface area. It's the same for our system, but in two dimensions. The interactions are always trying to minimize what we call the line tension.

"Elaa finds the Gibbs interface and measures the energy at that interface where it goes from many particles thick (at low magnetic field strengths) to nearly a single particle thick by changing the strength of the interaction," she said. "She's done a lot of analysis of the line tension and how it relates to the energetics of the system."

The next step is to create physical, movable models for real systems to see how the constituents react when perturbed. "There's a lot of interest in trying to create models for atomic and molecular systems," Biswal said. "Most of that has been done through computational simulations, but here we have an experimental system that can realize structure and processes such as coalescence."

"For example, in catalysis, if you want to increase the surface area, you want more voids in order to facilitate contact between a catalyst and a reaction," Hilou said. "By increasing the concentration and controlling the field, we can start to see voids and control the interface relative to the bulk."

The technique could model emulsions, she said. "Say you have oil and water and you want to phase-separate them," Hilou said. "In the case of cosmetics and the food industry, you want the emulsions to be stable. We want to be able to mimic their dynamics by controlling particle size and the field strength."

Biswal said the technique might also be used to model systems in which temperature, rather than electromagnetism, is the driver. In fields like metallurgy, defects are removed "by turning up the temperature to give molecules more freedom to move grain boundaries and voids," she said. "Then they decrease the temperature to lock in the structures.

"What we have is a dial that not only mimics the effects of temperature with a magnetic field but also offers the ability to watch through a microscope what happens in an actual system," Biswal said.