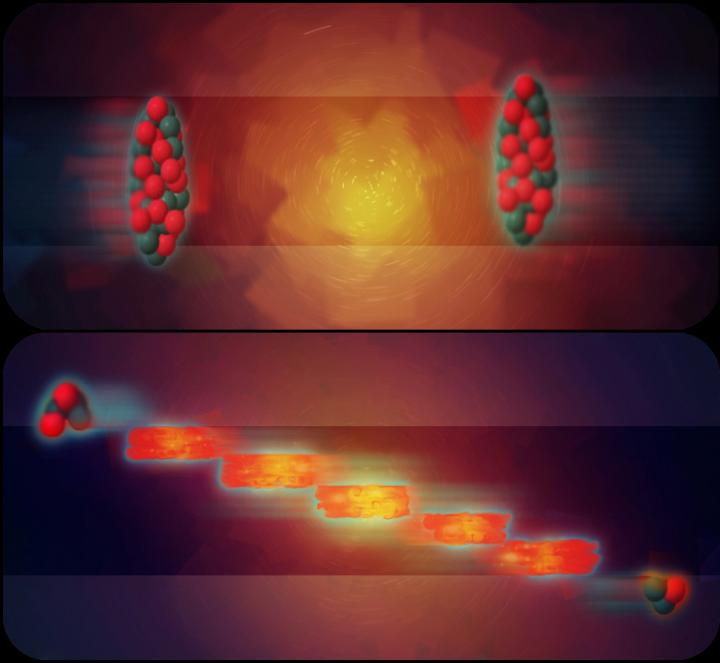 Fragments of extremely hot matter, produced in the collision of heavy atomic nuclei at the SPS accelerator at the European CERN centre, move away from each other at high velocities, forming streaks along the direction of the collision. Source: Source: IFJ PAN, Iwona Sputowska

At very high energies, the collision of massive atomic nuclei in an accelerator generates hundreds or even thousands of particles that undergo numerous interactions. At the Institute of Nuclear Physics of the Polish Academy of Sciences in Cracow, Poland it has been shown that the course of this complex process can be represented by a surprisingly simple model: extremely hot matter moves away from the impact point, stretching along the original flight path in streaks, and the further the streak is from the plane of the collision, the greater its velocity.

When two massive atomic nuclei collide at high energies, the most exotic form of matter is formed: the quark-gluon plasma behaving like a perfect fluid. The theoretical considerations of physicists from the Institute of Nuclear Physics of the Polish Academy of Sciences (IFJ PAN) in Cracow, Poland show that after impact the plasma forms into streaks along the direction of impact, moving faster the further away it moves from the collision axis. The model, its predictions and the effects of their confrontation with hitherto experimental data are presented in the journal Physical Review C.

Collisions of atomic nuclei occur extremely rapidly and at distances of merely hundreds of femtometres (i.e. hundreds of millionths of one billionth of a metre). The physical conditions are exceptionally sophisticated and direct observation of the phenomenon is not currently possible. In such situations, science copes by constructing theoretical models and confronting their predictions with the data collected in experiments. In the case of these collisions, however, a huge disadvantage is that the resulting conglomerate of particles is the quark-gluon plasma. Interactions between quarks and gluons are dominated by forces that are so strong and complex that modern physics is not capable of describing them precisely.

“Our group decided to focus on the electromagnetic phenomena occurring during the collision because they are much easier to express in the language of mathematics. As a result, our model proved to be simple enough for us to employ the principles of energy and momentum conservation without too much trouble. Later on, we found that despite the adopted simplifications the model predictions remain at least 90% consistent with experimental data”, says Dr. Andrzej Rybicki (IFJ PAN).

Massive atomic nuclei accelerated to high velocities, observed in the laboratory, are flattened in the direction of motion as a result of the effects of the theory of relativity. When two such proton-neutron ‘pancakes’ fly towards each other, the collision is generally not central: only some of the protons and neutrons of one nucleus reach the other, entering into violent interactions and forming the quark-gluon plasma. At the same time, some of the external fragments of the nuclear pancakes do not encounter any obstacles on their way and continue their uninterrupted flight; in the jargon of physicists they are called spectators.

“Our work was inspired by data collected in earlier experiments with nuclear collisions, including these made at the SPS accelerator. The electromagnetic effects occurring in these collisions that we examined showed that the quark-gluon plasma moves at a higher velocity the closer it is to the spectators”, says Dr. Rybicki.

In order to reproduce this course of the phenomenon, the physicists from IFJ PAN decided to divide the nuclei along the direction of movement into a series of strips – ‘bricks’. Each nucleus in cross section thus looked like a pile of stacked bricks (in the model their height was one femtometre). Instead of considering the complex strong interactions and flows of momentum and energy between hundreds and thousands of particles, the model reduced the problem to several dozen parallel collisions, each occurring between two proton-neutron bricks.

The IFJ PAN scientists confronted the predictions of the model with data collected from collisions of massive nuclei measured by the NA49 experiment at the Super Proton Synchrotron (SPS). This accelerator is located at the CERN European Nuclear Research Organization near Geneva, where one of its most important tasks now is to accelerate particles shot into the LHC accelerator.

“Due to the scale of technical difficulties, the NA49 experiment’s results are subject to specific measurement uncertainties that are difficult to completely reduce or eliminate. In reality, the accuracy of our model can even be greater than the already mentioned 90%. This entitles us to say that even if there were any additional, still not included, physical mechanisms in the collisions they should no longer significantly affect the theoretical framework of the model”, comments doctoral student Miroslaw Kielbowicz (IFJ PAN).

After developing the model of collisions of ‘brick stacks’, the IFJ PAN researchers discovered that a very similar theoretical structure, called the fire streak model, had been proposed by a group of physicists from the Lawrence Berkeley Laboratory (USA) and the Saclay Nuclear Research Centre in France – already in 1978.

“The previous model of fire streaks which, in fact, we mention in our publication, was built to describe other collisions occurring at lower energies. We have created our structure independently and for a different energy range”, says Prof. Antoni Szczurek (IFJ PAN, University of Rzeszow) and emphasizes: “The existence of two independent models based on a similar physical idea and corresponding to measurements in different energy ranges of collisions increases the probability that the physical basis on which these models are built is correct”.

The Cracow fire streak model provides new information on the expansion of quark-gluon plasma in high energy collisions of massive atomic nuclei. The study of these phenomena is being further extended in the framework of another international experiment, NA61/SHINE at the SPS accelerator.