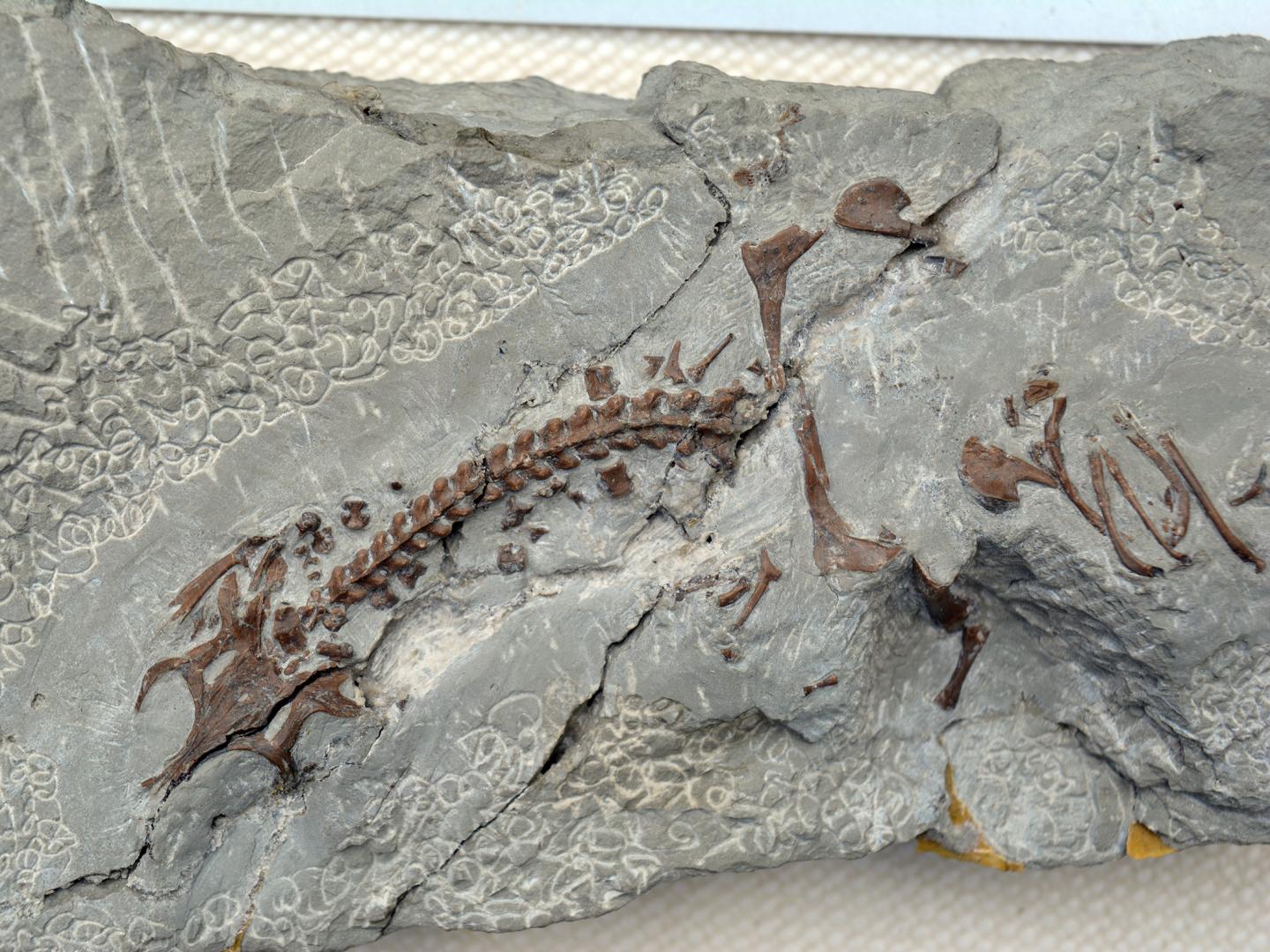 CHW 189 from the private collection of Herman Winkelhorst (Netherlands). The neck of the animal is excellently preserved, but the rest is not. One possible explanation may be that this is the result of uneven colonization of the carcass by microorganisms and algae, which created a protective layer especially around the neck. Credit: Jelle Heijne/Uni Bonn

It has long been known that a quarry near the Dutch town of Winterswijk is an Eldorado for fossil lovers. But even connoisseurs will be surprised just how outstanding the site actually is. A student at the University of Bonn, himself a Dutchman and passionate fossil collector, has now analyzed pieces from museums and private collections for his master’s thesis. He found an amazing amount of almost completely preserved skeletons, all between 242 and 247 million years old. The good condition is presumably due to particularly favorable development conditions. These make Winterswijk, which belongs to the so-called Germanic Basin, a cornucopia for paleontology. The study is published in the Paläontologische Zeitschrift.

Jelle Heijne examined exactly 327 remains of marine reptiles for his master’s thesis – collected partly from public museums, but primarily from about 20 private collections. He was particularly impressed by the high quality of the finds: “Among them were more than 20 contiguous skeletons,” he emphasizes. “Only very few complete skeleton finds are known from the other sites of the Germanic Basin, which stretches from England to Poland.”

In his study, the 25-year-old investigated the question of why the bones, which are over 240 million years old, have been preserved so well here. The reason is probably a combination of fortunate circumstances: At that time the Germanic Basin was a sea, which was extremely shallow in today’s Winterswijk. This is illustrated by the fossil footprints of terrestrial animals that were found not far from the reptile bones. The region probably resembled today’s Wadden Sea of the North Sea coast, but with a bottom that was not sandy but covered in lime silt.

The shallow depth ensured that cadavers quickly hit the ground, where they were then covered by sediment. If dead animals float in the water for a long time and are tossed back and forth by waves and currents, the probability increases that body parts, such as tail, limbs or head, are lost.

Another important factor was a process called “Stick’n’Peel” by paleontologists: The animal is colonized by microorganisms and algae that hold the skeleton together like a skin. “It was probably these two factors in particular that favored the occurrence of well-preserved finds,” explains Heijne.

In fact, there is some evidence for the Stick’n’Peel hypothesis. For example, some skeletons lack individual larger bones, while the small bones are complete – even though the latter are usually most likely to be carried away by the water. “Such unusual patterns typically occur when a skeleton is unevenly colonized and thus protected,” Heijne explains.

It has long been known that Winterswijk stands out among the sites of the Germanic Basin. Nevertheless, the large number of high-quality finds is likely to surprise even connoisseurs, especially since most of the finds are not accessible to the public. “I have been a member of an association of private collectors in the Netherlands for years,” Heijne explains. This was the ideal contact exchange for his study: “The collectors I approached were all proud to be able to contribute to the research on Winterswijk.”