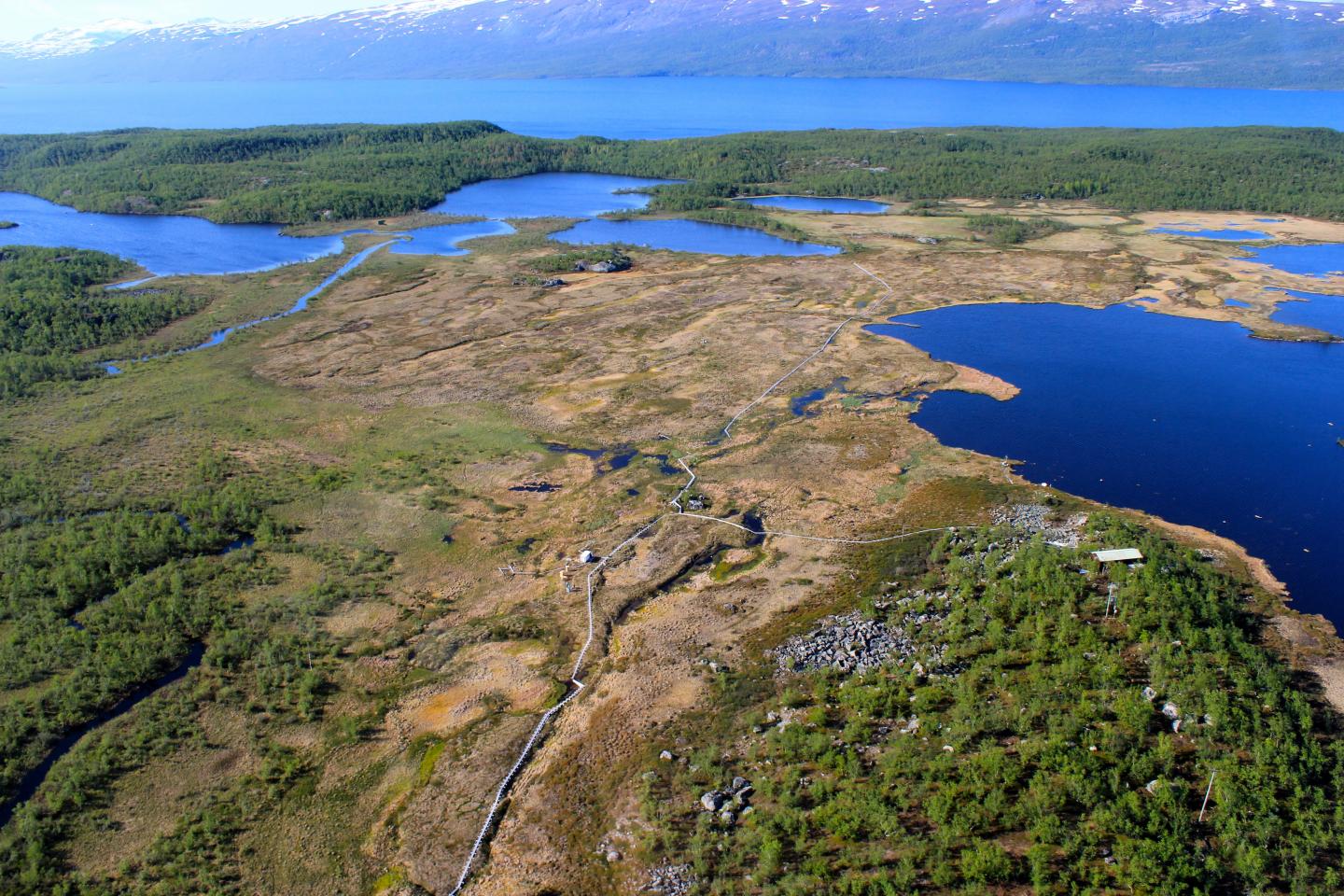 This is an aerial view of the field site in Arctic Sweden, where researchers uncovered thousands of previously unrecognized microbes that could contribute to the speed of climate change. Credit: Scott Saleska

A new understanding of the microbes and viruses in the thawing permafrost in Sweden may help scientists better predict the pace of climate change.

Microbes have significant influence over global warming, primarily through the production of – or consumption of – methane, and new details about these microscopic beings’ genetics is now available, thanks to a trio of studies from a project co-led by researchers at The Ohio State University.

The research appears in Nature, Nature Microbiology and ISME Journal.

“Because of global climate change, huge amounts of permafrost are rapidly warming. To microbes, they’re like freezers full of juicy chicken dinners that are thawing out,” said Virginia Rich, an assistant professor of microbiology at Ohio State and study author.

“In many cases, microbes take advantage of this situation to chew up what’s in the permafrost and breathe out methane. That methane really packs an environmental wallop, with 33 times the climate warming power of carbon dioxide.”

Many of these bacterial “consumers” and the viruses that influence them have been identified for the first time in these studies.

While scientists have a clear understanding of the dangers of thawing permafrost for releasing methane, they haven’t had a lot of details on the ins and outs of these microbial communities and their contribution to the process.

“The problem is, we don’t know all the microbes involved and how they will respond to climate change as the conditions get warmer and wetter, and to do a better job at predicting what will happen in the coming decades we need more information about the key players,” Rich said.

Matt Sullivan, a professor of microbiology at Ohio State and senior author on the virus study, said the research is also important because it contributes a great deal to the general understanding of what is happening in soil.

“While we’ve learned a lot about ocean viruses in recent decades, we know next to nothing about soil viruses,” he said. “This work’s viruses are so novel that they have doubled the total known viruses in the world.”

The multinational study was conducted in the portion of Sweden in the Arctic circle, one of the best places in the world to study thawing permafrost because of the rapid changes happening there and because of long-standing and well-documented scientific work in the area, Rich said.

A team of researchers from 10 organizations with expertise in a variety of areas including microbiology, geochemistry and climate modeling are working together in the IsoGenie Project, co-led by Ohio State’s Rich, to figure out how they can better predict future climate change based on improved understanding of the connections between microbes and geochemistry.

In these studies, they recovered more than 1,500 microbial genomes in the soil, which was 100 times what was available previously for these habitats. They also found more than 1,900 new viral populations, where none had been previously identified. A genome is the complete set of genes present in an organism.

The researchers were able to link more than a third of the viruses to the microbes they impact.

“Now, we have a roadmap from these genomes to be able to understand the roles they play in these communities,” Sullivan said.

By looking at the genomes of the microbes, the team was able to figure out what capabilities they have.

“It’s like now we have not only their fingerprints but also their resumes, to know both who they are and what they are capable of. The next step is figuring out more of what they’re actually actively doing out in the field,” Rich said.

This is important for several reasons, she said.

It will enable climate scientists to better estimate the speed of climate change, giving humans a clearer timetable for response. The study of these rapidly changing habitats also helps the public better appreciate the realities of climate change, Rich said. Furthermore, there might be opportunities for mitigating those effects, including the potential to “fertilize” areas of permafrost to encourage environmentally protective microbial activity, she said.

Not everything about the microbial communities in the permafrost is bad news. Some, called methanotrophs, consume methane in the soil before it gets to the air, which is good for the environment.

“As the conditions get warmer and wetter microbes are going to be changing, and some that eat methane may rise up,” Rich said.