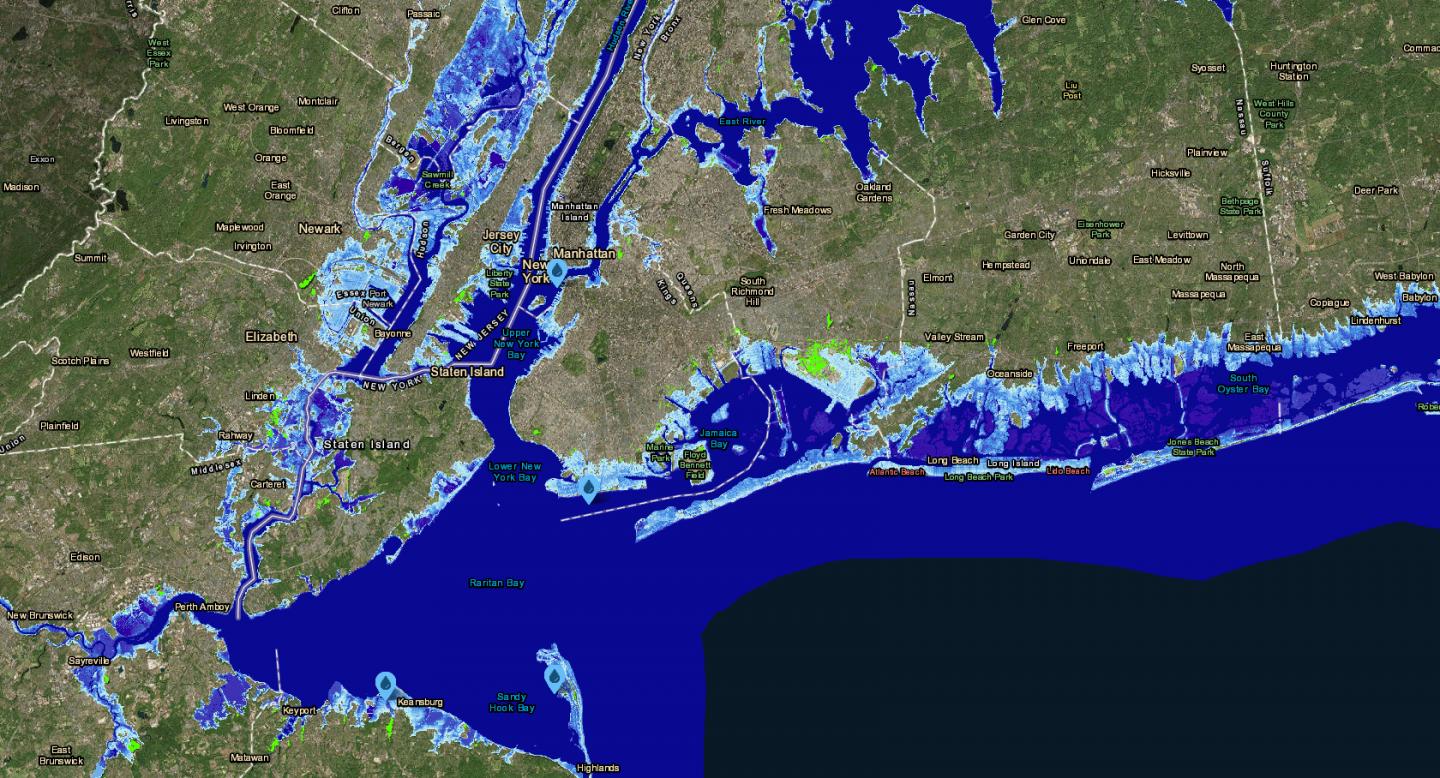 Parts of New Jersey and New York with 8 feet of sea-level rise. An almost 8-foot rise is possible by 2100 under a worst-case scenario, according to projections. The light-blue areas show the extent of permanent flooding. The bright green areas are low-lying. Credit: NOAA Sea Level Rise Viewer

Global average sea-level could rise by nearly 8 feet by 2100 and 50 feet by 2300 if greenhouse gas emissions remain high and humanity proves unlucky, according to a review of sea-level change and projections by Rutgers and other scientists.

And with 11 percent of the world’s 7.6 billion people living in areas less than 33 feet above sea level, rising seas pose a major risk to coastal populations, economies, infrastructure and ecosystems around the world, the study says.

Sea-level rise varies over location and time, and scientists have developed a range of methods to reconstruct past changes and project future ones. But despite the differing approaches, a clear story is emerging regarding the coming decades: From 2000 to 2050, global average sea-level will most likely rise about 6 to 10 inches, but is extremely unlikely to rise by more than 18 inches. Beyond 2050, projections are more sensitive to changes in greenhouse gas emissions and to the approaches for projecting sea-level change.

“There’s much that’s known about past and future sea-level change, and much that is uncertain. But uncertainty isn’t a reason to ignore the challenge,” said study co-author Robert E. Kopp, a professor in the Department of Earth and Planetary Sciences at Rutgers University-New Brunswick and director of Rutgers’ Institute of Earth, Ocean, and Atmospheric Sciences. “Carefully characterizing what’s known and what’s uncertain is crucial to managing the risks sea-level rise poses to coasts around the world.”

Scientists used case studies from Atlantic City, New Jersey, and from Singapore to discuss how current methods for reconstructing past sea-level change can constrain future global and local projections. They also discussed approaches for using scientific sea-level projections and how accurate projections can lead to new sea-level research questions.

A large portion of sea-level rise in the 20th century, including most of the global rise since 1975, is tied to human-caused global warming, the study says.