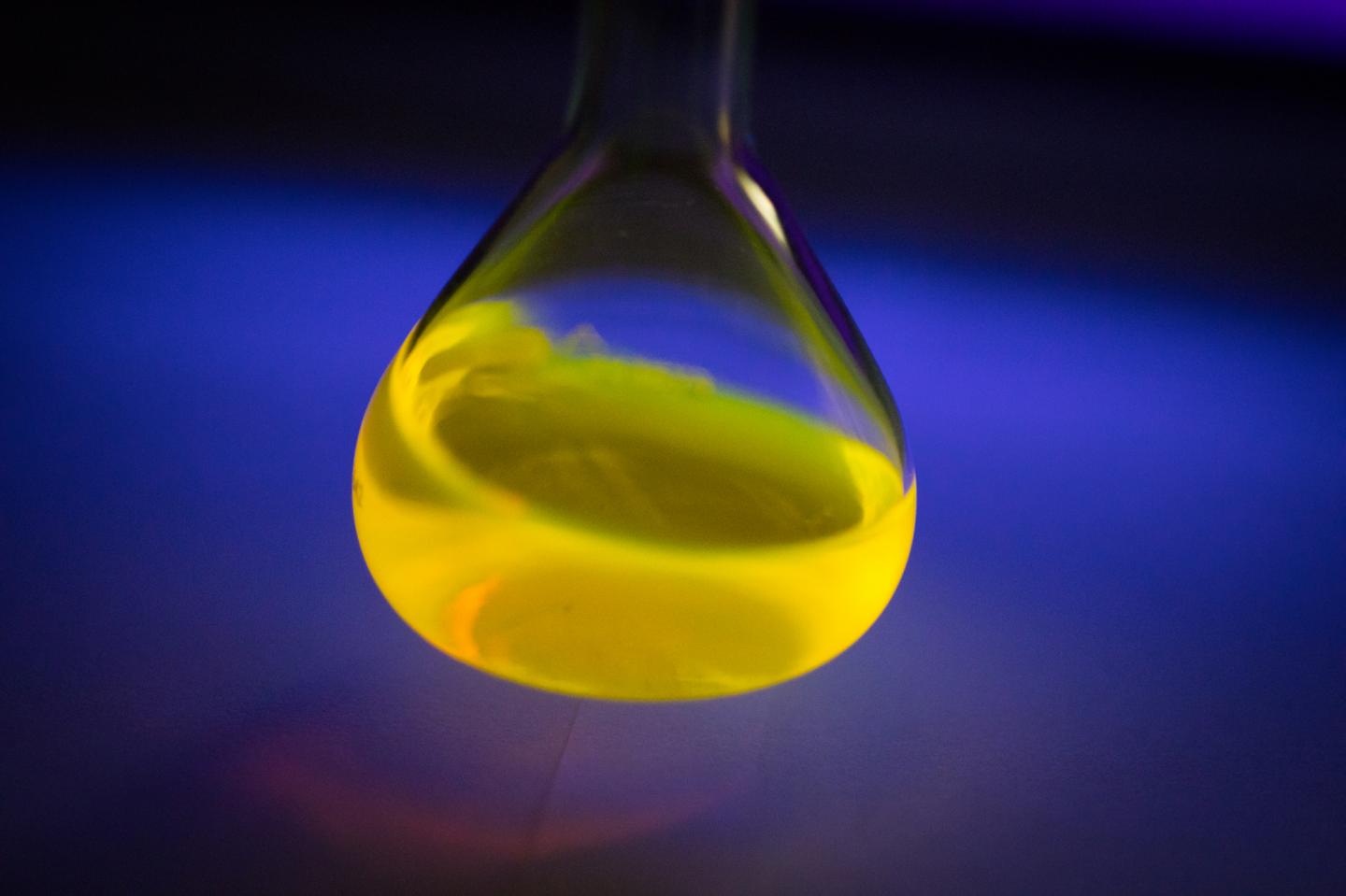 A glowing solution of BODIPY dye is swirled under a black light. A University at Buffalo study shows that the dye has interesting chemical properties that could make it an ideal material for use in large-scale rechargeable batteries. Credit: Douglas Levere

Could a glow-in-the-dark dye be the next advancement in energy storage technology?

Scientists at the University at Buffalo think so.

They have identified a fluorescent dye called BODIPY as an ideal material for stockpiling energy in rechargeable, liquid-based batteries that could one day power cars and homes.

But the traits that facilitate energy storage are less visible. According to new research, the dye has unusual chemical properties that enable it to excel at two key tasks: storing electrons and participating in electron transfer. Batteries must perform these functions to save and deliver energy, and BODIPY is very good at them.

In experiments, a BODIPY-based test battery operated efficiently and with longevity, running well after researchers drained and recharged it 100 times.

“As the world becomes more reliant on alternative energy sources, one of the huge questions we have is, ‘How do we store energy?’ What happens when the sun goes down at night, or when the wind stops?” says lead researcher Timothy Cook, PhD, an assistant professor of chemistry in the University at Buffalo College of Arts and Sciences. “All these energy sources are intermittent, so we need batteries that can store enough energy to power the average house.”

The research was published on Nov. 16 in ChemSusChem, an academic journal devoted to topics at the intersection of chemistry and sustainability.

A dye-based battery of the future

BODIPY is a promising material for a liquid-based battery called a “redox flow battery.”

These fluid-filled power cells present several advantages over those made from conventional materials.

Lithium-ion batteries, for example, are risky in that they can catch fire if they break open, Cook says. The dye-based batteries would not have this problem; if they ruptured, they would simply leak, he says.

Redox flow batteries can also be easily enlarged to store more energy — enough to allow a homeowner to power a solar house overnight, for instance, or to enable a utility company to stockpile wind energy for peak usage times. This matters because scaling up has been a challenge for many other proposed battery technologies.

How BODIPY works in a battery

When the battery is being used, electrons are harvested from one tank and moved to the other, generating an electric current that — in theory — could power devices as small as a flashlight or as big as a house. To recharge the battery, you would use a solar, wind or other energy source to force the electrons back into the original tank, where they would be available to do their job again.

A redox flow battery’s effectiveness depends on the chemical properties of the fluids in each tank.

“The library of molecules used in redox flow batteries is currently small but is expected to grow significantly in coming years,” Cook says.

“Our research identifies BODIPY dye as a promising candidate.”

In experiments, Cook’s team filled both tanks of a redox flow battery with the same solution: a powdered BODIPY dye called PM 567 dissolved in liquid.

Within this cocktail, the BODIPY compounds displayed a notable quality: They were able to give up and receive an electron without degrading as many other chemicals do. This trait enabled the dye to store electrons and facilitate their transfer between the battery’s two ends during repeated cycles — 100 — of charging and draining.

Based on the experiments, scientists also predict that BODIPY batteries would be powerful enough to be useful to society, generating an estimated 2.3 volts of electricity.