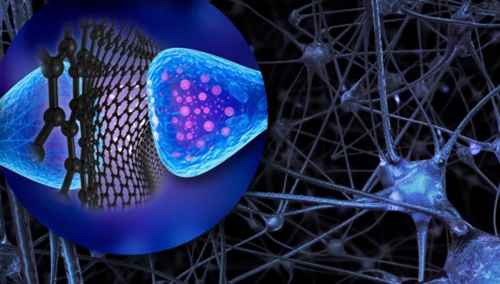 Selective, safe and with a reversible effect: they are the nanomaterials, protagonists of a new study by SISSA which has shed light on their ability to reach specific sites and affect the action of specific brain cells. This opens up remarkable future scenarios in research and for developing possible therapies for neurological diseases.

Like in a science fiction novel, miniscule spacecrafts able to reach a specific site of the brain and influence the operation of specific types of neurons or drug delivery: graphene flakes, the subject matter of the new study of the group of SISSA professor Laura Ballerini, open up truly futuristic horizons.

With the researcher, Rossana Rauti, Ballerini is responsible for the study recently published in the journal Nano Letters.

Measuring just one millionth of a meter, these particles have proven able to interfere with the transmission of the signal at excitatory neuronal synaptic junctions.

Furthermore, the study has shown that they do so in a reversible manner, because they disappear without leaving a trace few days after they have been administered. Basic research, which, thanks to this positive evidence, could initiate further studies, geared to investigating the possible therapeutic effects for the treatment of problems, such as epilepsy, in which an excess of the activity of the excitatory neurons is recorded or to study innovative ways to transport therapeutic substances in situ.

The research, carried out in association with the universities of Trieste, Manchester and Strasbourg, was conducted within the Graphene Flagship, the substantial funding project of the European Union, which aims to investigate the potential of graphene in the most diverse areas of application, from the biomedical to the industrial ones.

“We reported in in vitro models that these small flakes interfered with the transmission of the signals from one neuron to another acting at specific zones called synapses which are crucial to the operation of our nervous system” explain Ballerini and Rauti.

“The interesting thing is that their action is selective on specific synapses, namely those formed by neurons that in our brain have the role to excite (activate) their target neurons. We wanted to understand if this holds true not only in in vitro experiments but also inside an organism, with all the variable potential and complexity which derives from it.”

The result was more than positive.

“In our models we analyzed the activity of the hippocampus, a specific area of the brain, injecting the flakes into that site. What we saw, thanks to fluorescent tracers, is that the particles effectively insinuate themselves only inside the synapses of excitatory neurons. In this way, they interfere with the activity of these cells. In addition, they do so with a reversible effect: after 72 hours, the physiological mechanisms of clearance of the brain completely removed all the flakes.

The interest in the procedure, explain the researchers, also lies in the fact that the flakes are apparently well tolerated once injected into the organism: “The inflammatory response and the immune reaction has proved lower than that recorded when administering simple saline solution. This is very important for possible therapeutic purposes.”

The specificity of the action of the flakes, explained the researchers, would reside in the size of the particles used. They cannot be bigger or smaller than those adopted for this study (which measured approximately 100 to 200 nanometers of diameter).

“Size is probably at the root of selectivity: if the flakes are too big they are unable to penetrate the synapse, which are very narrow areas between one neuron and the other. If they are too small, they are presumably simply wiped out ultimately in both cases no effects on synapses were observed.”

The research will now explore the potential developments of this discovery, with a possible therapeutic horizon of definite interest for different pathologies.