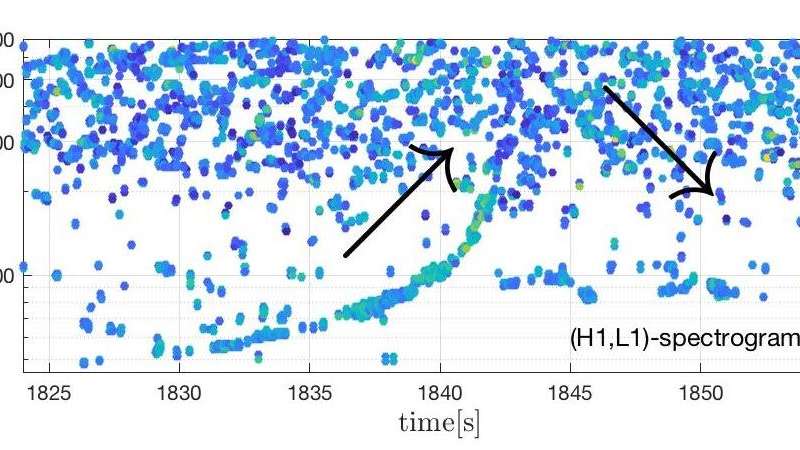 Graph showing data points from the LIGO gravitational wave observatory, plotting frequency against time. The GW170817 chirp in gravitational waves produced by the coalescence of two neutron stars is clearly visible as a sequence of dots in an ascending curve. After their merger, the gravitational-wave frequency declines for several seconds (see the line from 1843 to 1847 seconds), indicating a merged object with a decreasing spin rate. Van Putten and his team calculate that the chance of this being a false result is around 1 in 40,000. Credit: LIGO / M.H.P.M van Putten & M. Della Valle

For the first time astronomers have detected gravitational waves from a merged, hyper-massive neutron star. The scientists, Maurice van Putten of Sejong University in South Korea, and Massimo della Valle of the Osservatorio Astronomico de Capodimonte in Italy, publish their results in Monthly Notices of the Royal Astronomical Society: Letters.

Gravitational waves were predicted by Albert Einstein in his General Theory of Relativity in 1915. The waves are disturbances in space time generated by rapidly moving masses, which propagate out from the source. By the time the waves reach the Earth, they are incredibly weak and their detection requires extremely sensitive equipment. It took scientists until 2016 to announce the first observation of gravitational waves using the Laser Interferometer Gravitational Wave Observatory (LIGO) detector.

Since that seminal result, gravitational waves have been detected on a further six occasions. One of these, GW170817, resulted from the merger of two stellar remnants known as neutron stars. These objects form after stars much more massive than the Sun explode as supernovae, leaving behind a core of material packed to extraordinary densities.

At the same time as the burst of gravitational waves from the merger, observatories detected emission in gamma rays, X-rays, ultraviolet, visible light, infrared and radio waves – an unprecedented observing campaign that confirmed the location and nature of the source.

The initial observations of GW170817 suggested that the two neutron stars merged into a black hole, an object with a gravitational field so powerful that not even light can travel quickly enough to escape its grasp. Van Putten and della Valle set out to check this, using a novel technique to analyse the data from LIGO and the Virgo gravitational wave detector sited in Italy.

Their detailed analysis shows the H1 and L1 detectors in LIGO, which are separated by more than 3,000 kilometres, simultaneously picked up a descending ‘chirp’ lasting around 5 seconds. Significantly, this chirp started between the end of the initial burst of gravitational waves and a subsequent burst of gamma rays. Its low frequency (less than 1 KHz, reducing to 49 Hz) suggests the merged object spun down to instead become a larger neutron star, rather than a black hole.

There are other objects like this, with their total mass matching known neutron star binary pairs. But van Putten and della Valle have now confirmed their origin.

Van Putten comments: “We’re still very much in the pioneering era of gravitational wave astronomy. So it pays to look at data in detail. For us this really paid off, and we’ve been able to confirm that two neutron stars merged to form a larger one.”

Gravitational wave astronomy, and eking out the data from every detection, will take another step forward next year, when the Japanese Kamioka Gravitational Wave Detector (KAGRA) comes online.