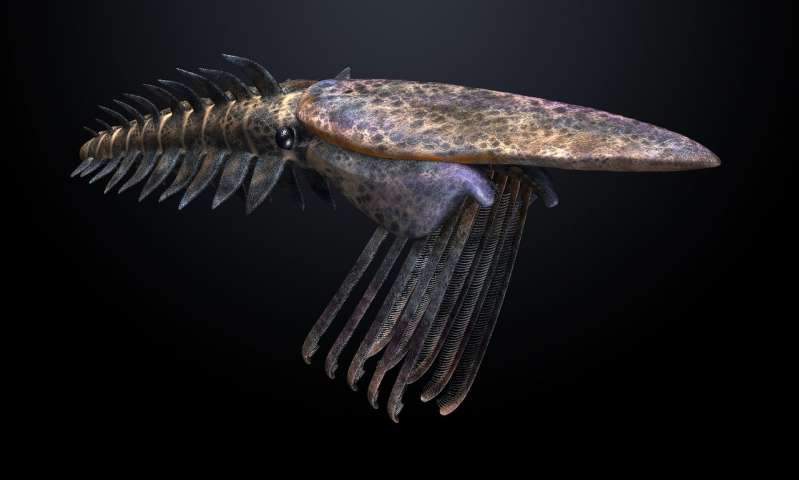 Stephen Pates, a researcher from Oxford University’s Department of Zoology, has uncovered secrets from the ancient oceans.

With Dr. Rudy Lerosey-Aubril from New England University (Australia), he meticulously re-examined fossil material collected over 25 years ago from the mountains of Utah, USA. The research, published in a new study in Nature Communications, reveals further evidence of the great complexity of the oldest animal ecosystems.

Twenty hours of work with a needle on the specimen while submerged underwater exposed numerous, delicate microscopic hair-like structures known as setae. This revelation of a frontal appendage with fine filtering setae has allowed researchers to confidently identify it as a radiodont – an extinct group of stem arthropods and distant relatives of modern crabs, insects and spiders.

“Our new study describes Pahvantia hastasta, a long-extinct relative of modern arthropods, which fed on microscopic organisms near the ocean’s surface,” says Stephen Pates. “We discovered that it used a fine mesh to capture much smaller plankton than any other known swimming animal of comparable size from the Cambrian period. This shows that large free-swimming animals helped to kick-start the diversification of life on the sea floor over half a billion years ago.”

Causes of the Cambrian Explosion—the rapid appearance in the fossil record of a diverse animal fauna around 540-500 million years ago—remain hotly debated. Although it probably included a combination of environmental and ecological factors, the establishment of a system to transfer energy from the area of primary production (the surface ocean) to that of highest diversity (the sea floor) played a crucial role.

Even though relatively small for a radiodont (FIG), Pahvantia was 10-1000 times larger than any mesoplanktonic primary consumers, and so would have made the transfer of energy from the surface oceans to the deep sea much more efficient. Primary producers such as unicellular algae are so small that once dead they are recycled locally and do not reach the deep ocean. In contrast large animals such as Pahvantia, which fed on them, produce large faecal pellets and carcasses, which sink rapidly and reached the seafloor, where they become food for bottom-dwelling animals.

The presence of Pahvantia in the Cambrian of Utah has been known for decades thanks to the efforts of local amateur collectors Bob Harris and the legendary Gunther family.

“This work also provides an opportunity to celebrate the exceptional contribution of local and amateur collectors to modern palaeontology,” explains Stephen. “Without their tireless efforts, knowledge, and generosity, thousands of specimens representing hundreds of new species, would not be known to science.”

Bob Harris is rumoured to have turned down a job offer from the CIA, instead opening up a fossil shop and a number of quarries in the spectacular House Range, Utah. He discovered the first specimens of Pahvantia in the 1970s, and donated them to Richard Robison, a leading expert on Cambrian life from the University of Kansas. The Gunther family are famous for their extensive fossil collecting in Utah and Nevada. Over a dozen species have been named in honour of their contributions to palaeontology, as they have shared thousands of specimens with museums and schools over the years. Among these were specimens of Pahvantia which they uncovered between 1987 and 1997. Donated to the Kansas University Museum of Invertebrate Paleontology (KUMIP), these specimens are described for the first time in our study.

“I visited the KUMIP in the first year of my Ph.D.,” says Stephen. “It was awesome, exploring such a fantastic collection of fossils from the Cambrian of Utah and Nevada.”

The study has produced the most up-to-date analysis of evolutionary relationships between radiodonts. It shows that filter feeding evolved twice, possibly three times in this group, which otherwise essentially comprised fearsome predators such as Anomalocaris canadensis from the Burgess Shale in Canada.

Pahvantia adds to an ever-growing body of evidence that radiodonts were vital in the structure of Cambrian ecosystems, in this case linking the primary producers of the surface waters to the highly diverse fauna on the sea floor. It also shows the importance of museum collections like the KUMIP, and local collectors, such as Bob Harris and the Gunther family, in uncovering new and exciting findings about early animal life.