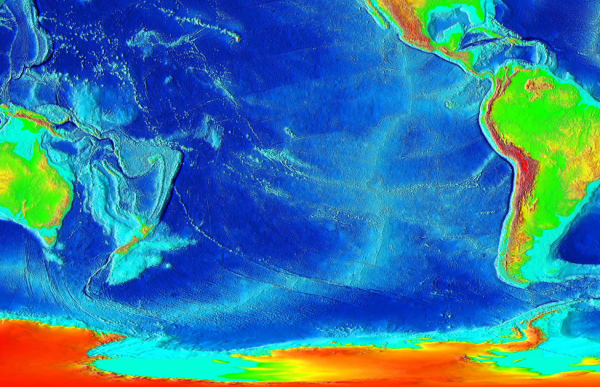 Researchers find the East Pacific Rise is dynamic as heat is transferred, showing that plate dynamics are driven significantly by additional force of heat drawn from Earth’s core.

For decades, scientists have theorized that the movement of Earth’s tectonic plates is driven largely by negative buoyancy created as they cool. New research, however, shows plate dynamics are driven significantly by the additional force of heat drawn from the Earth’s core.

The new findings also challenge the theory that underwater mountain ranges known as mid-ocean ridges are passive boundaries between moving plates. The findings show the East Pacific Rise, the Earth’s dominant mid-ocean ridge, is dynamic as heat is transferred.

David B. Rowley, professor of geophysical sciences at the University of Chicago, and fellow researchers came to the conclusions by combining observations of the East Pacific Rise with insights from modeling of the mantle flow there. The findings were published Dec. 23 in Science Advances.

“We see strong support for significant deep mantle contributions of heat-to-plate dynamics in the Pacific hemisphere,” said Rowley, lead author of the paper. “Heat from the base of the mantle contributes significantly to the strength of the flow of heat in the mantle and to the resultant plate tectonics.”

The researchers estimate up to approximately 50 percent of plate dynamics are driven by heat from the Earth’s core and as much as 20 terawatts of heat flow between the core and the mantle.

Unlike most other mid-ocean ridges, the East Pacific Rise as a whole has not moved east-west for 50 to 80 million years, even as parts of it have been spreading asymmetrically. These dynamics cannot be explained solely by the subduction—a process whereby one plate moves under another or sinks. Researchers in the new findings attribute the phenomena to buoyancy created by heat arising from deep in the Earth’s interior.

“The East Pacific Rise is stable because the flow arising from the deep mantle has captured it,” Rowley said. “This stability is directly linked to and controlled by mantle upwelling,” or the release of heat from Earth’s core through the mantle to the surface.

The Mid-Atlantic Ridge, particularly in the South Atlantic, also may have direct coupling with deep mantle flow, he added.

“The consequences of this research are very important for all scientists working on the dynamics of the Earth, including plate tectonics, seismic activity and volcanism,” said Jean Braun of the German Research Centre for Geosciences, who was not involved in the research.

The forces at work
Convection, or the flow of mantle material transporting heat, drives plate tectonics. As envisioned in the current research, heating at the base of the mantle reduces the density of the material, giving it buoyancy and causing it to rise through the mantle and couple with the overlying plates adjacent to the East Pacific Rise. The deep mantle-derived buoyancy, together with plate cooling at the surface, creates negative buoyancy that together explain the observations along the East Pacific Rise and surrounding Pacific subduction zones.

A debate about the origin of the driving forces of plate tectonics dates back to the early 1970s. Scientists have asked: Does the buoyancy that drives plates primarily derive from plate cooling at the surface, analogous with cooling and overturning of lakes in the winter? Or, is there also a source of positive buoyancy arising from heat at the base of the mantle associated with heat extracted from the core and, if so, how much does it contribute to plate motions? The latter theory is analogous to cooking oatmeal: Heat at the bottom causes the oatmeal to rise, and heat loss along the top surface cools the oatmeal, causing it to sink.

Until now, most assessments have favored the first scenario, with little or no contribution from buoyancy arising from heat at the base. The new findings suggest that the second scenario is required to account for the observations, and that there is an approximately equal contribution from both sources of the buoyancy driving the plates, at least in the Pacific basin.

“Based on our models of mantle convection, the mantle may be removing as much as half of Earth’s total convective heat budget from the core,” Rowley said.
Much work has been performed over the past four decades to represent mantle convection by computer simulation. Now the models will have to be revised to account for mantle upwelling, according to the researchers.

“The implication of our work is that textbooks will need to be rewritten,” Rowley said.

The research could have broader implications for understanding the formation of the Earth, Braun said. “It has important consequences for the thermal budget of the Earth and the so-called ‘secular cooling’ of the core. If heat coming from the core is more important than we thought, this implies that the total heat originally stored in the core is much larger than we thought.

“Also, the magnetic field of the Earth is generated by flow in the liquid core, so the findings of Rowley and co-authors are likely to have implications for our understanding of the existence, character and amplitude of the Earth’s magnetic field and its evolution through geological time,” Braun added.