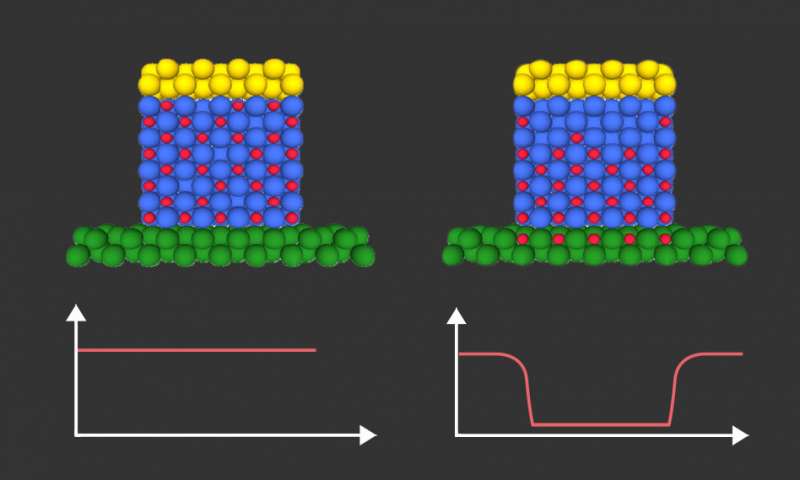 Illustration shows how hydrogen ions (red dots), controlled by an electric voltage, migrate through an intermediate material to change the magnetic properties of an adjacent magnetic layer(shown in green). Credit: courtesy of the researchers, edited by MIT News

Hydrogen ions may hold the key to enabling spintronics to produce memory, computing and sensing devices that consume less power than current versions and overcome some of the limitations stymying progress.

Researchers from the Massachusetts Institute of Technology and the U.S. Department of Energy’s Brookhaven National Laboratory have found a way to control the magnetism of a thin-film material by applying a small voltage. Unlike current standard memory chips, changes in magnetic orientation made in this way will remain stable in the new state without ongoing power.

Silicon microchips are closing in on their fundamental physical limits, which could cap their ability to continue increasing their capabilities while decreasing their power consumption. One alternative that researchers have explored is called spintronics, which makes use of spin in electrons rather than electrical charge.

Spintronic devices retain their magnetic properties with a constant power source and need less heat to operate, but spintronic technology lacks a key ingredient that would make it possible to easily and rapidly control the magnetic properties of a material by applying a voltage.

Previous attempts have relied on electron accumulation at the interface between a metallic magnetic and an insulator, using a device structure similar to a capacitor.   The electrical charge can change the magnetic properties of the material, but only a small amount. Scientists have also attempted to use ions instead of electrons to change the magnetic properties, but the insertion and removal of oxygen ions causes mechanical damage because the material swells and shrinks.

In the new study, the researchers found a way to use hydrogen ions instead of the much larger oxygen ions. Using hydrogen ions speeds up the system and provide other advantages.

Hydrogen’s size allows it to enter and exit from the crystalline structure of the spintronic device and change its magnetic orientation each time without damaging the material. The research team demonstrated that the process produced no degradation of the material after more than 2,000 cycles and they were able to control the properties of layers deep in the device that could not be controlled using other techniques.

It is possible to easily write and erase data bits in spintronic devices using this effect because the orientation of the poles of the magnet is what is used to store information.

“When you pump hydrogen toward the magnet, the magnetization rotates,” MIT graduate student Aik Jun Tan said in a statement. “You can actually toggle the direction of the magnetization by 90 degrees by applying a voltage—and it’s fully reversible.”