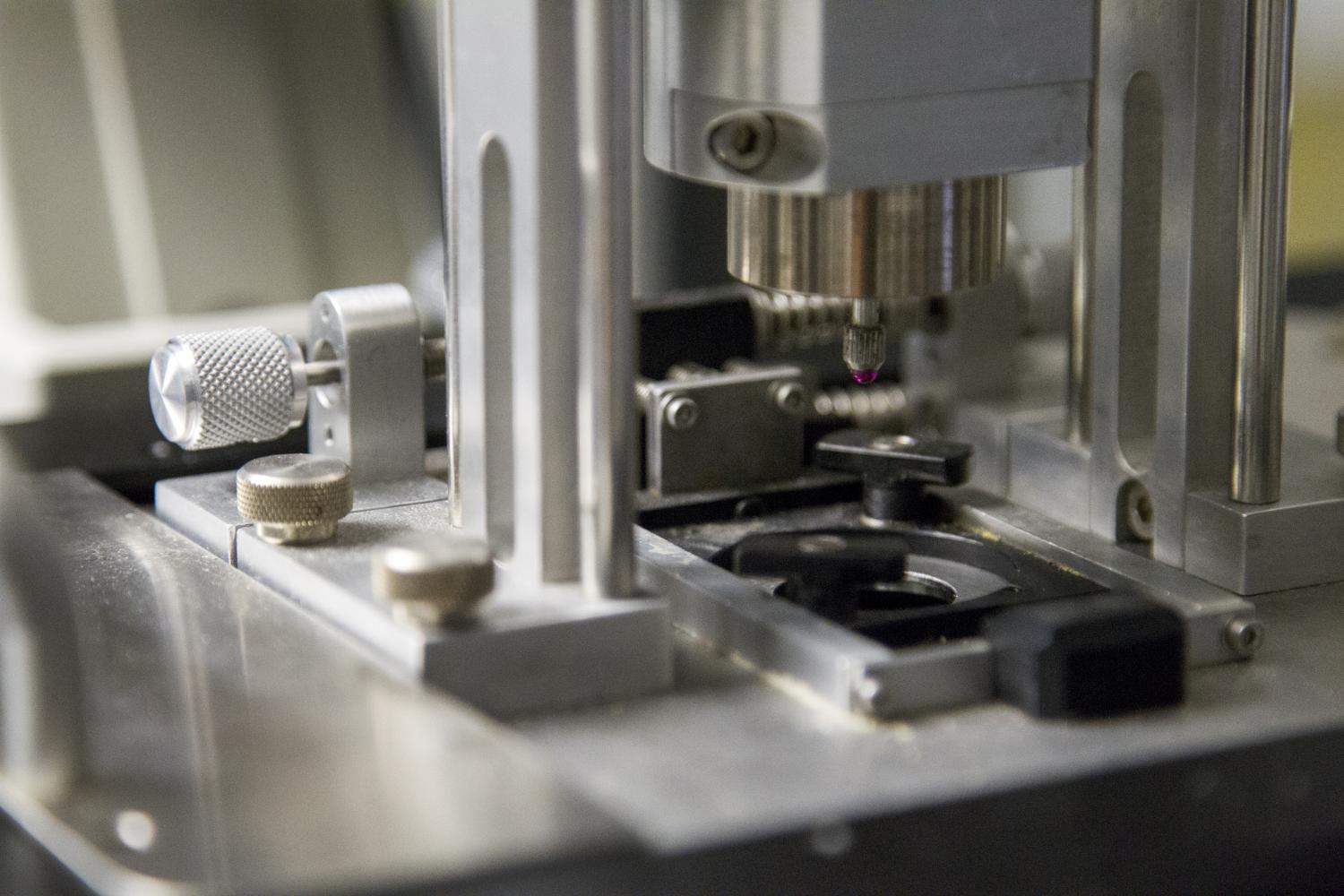 A new device developed at Brown University can deliver concussive force to neurons growing in a 3-D matrix and image the effects in real time. Researchers are hopeful that the device can shed critical light on how traumatic brain injury unfolds at the cellular level Credit: Nick Dentamaro / Brown University

A team of Brown University researchers has been able to watch in real time what happens to neurons after they experience the kinds of forces involved in a blow to the head. Their findings, published in the journal Scientific Reports, could help scientists to understand how traumatic brain injury unfolds at the cellular level.

The study was done using a custom-built laboratory device that can compress neurons inside 3-D cell cultures while using a powerful microscope to continuously monitor changes in cell structure.

“This is the first study that applied this kind strain to brain cells and followed them over time,” said Christian Franck, an assistant professor in Brown’s School of Engineering and the paper’s corresponding author. “We’re excited because we can finally get some concrete information about when cells start to degenerate, when they die and what the process looks like.”

Among the study’s key findings was that after a compression event with forces similar to those involved in traumatic brain injury (TBI), it takes approximately six hours for neurons to develop irreparable structural damage. That suggests that there may be a window for therapeutic intervention aimed at minimizing further damage, Franck said.

The study also found two different types of structural damage occurring in cells following compression. One type, called diffuse axonal injury, scientists know well as a hallmark manifestation of cellular TBI. But the second form, which also led to cell death, has not previously been associated with TBI. That finding suggests that the full extent of TBI damage in the brain could be underestimated in some cases.

“We hope that this work provides some fundamental guideposts for future research on TBI,” Franck said. “Once we understand how this works at a basic cellular level, then we can start to think about adding the complexity back in and understanding how it works in the brain.”

What made the research possible was an experimental technique Franck’s lab has been developing over the past few years. Most lab studies on neuronal injury are done using two-dimensional cell cultures grown on slides or petri dishes. To see what happens when cells are placed under strain, researchers either stretch them or expose them to shearing forces. But 2-D techniques can’t evaluate compressive force, which is known to be important in blows to the head.

“We wanted to add this other facet of compression to our laboratory work,” Franck said. “The only way you can do that is in 3-D.”

Franck and his colleagues grew rat neurons in 3-D collagen cultures about the diameter of a quarter. They then placed the cultures in their device, which has a hydraulic piston apparatus that sits atop a laser-scanning microscope. The piston delivers precisely tuned compressive force to the culture, while the microscope generates continuous images of cell structures.

That real-time observation was a key part of the work, Franck said.

“If we can look at this continuously, then we can get a much better idea of when permanent damage begins and when cells finally die,” he said.

Researchers have known for a while that much of the damage and cell death in TBI does not occur at the moment of impact. Instead, there appears to be a biochemical cascade that, over a period of time, causes damage to accrue in the cells and eventually leads to death. One problem, however, is that nobody knows exactly how long that process takes after a compressive strain, or whether it occurs slower or faster depending on the severity of the impact.

Franck’s work found that it take about six hours for neurons to show signs of irreparable damage from the amount of compression thought to be typical of blows to the head. But the timing from the onset of damage to cell death varied according to the amount of compression. For example, cells exposed to a 7 percent strain died after about 12 hours, while those exposed to a 12 percent strain died in around seven hours.

“Our system doesn’t have nearly the complexity of a real brain, so we’re not saying that it plays out exactly this way in TBI patients,” he said. “But we wanted to start simply and get fundamental data on how neurons respond to these strains. We think it provides a good starting point for further research.”

A particular advantage to Franck’s device is that is that it enables precise control over the total amount of compression and how long it is applied (called strain rate). The study showed that both of those factors influenced cellular injury in different ways. While the total amount of compression was responsible for the timing of cell death, strain rate was responsible for how many cells were damaged and what kind of damage they suffered.

At the higher strain rates used in the study, neurons developed diffuse axonal injury (DAI)—the hallmark of TBI in which cellular appendages called axons swell and eventually break, forming bubbles or “blebs” at the breaking points. But at slower strain rates, the structural damage took a different form. Instead of breaking and forming blebs, the axons and neurite extensions simply retracted as the cells died.

“Pathologists look for blebs and other signs of DAI to assess whether a TBI has occurred and how widespread the damage is,” Franck said. “But what this suggests is that they may be missing this other type of morphology.”

The effect of strain rate is important because while scientists know generally how fast TBI-related impacts are (in the National Football League, for example, impacts are about 15 milliseconds), it’s not clear how that energy wave is transmitted through the brain. The strain rate applied to the outside of the head could be very different from what is transmitted through the brain, and this study suggests that the manifestation of injury could be different depending on the rate.

Franck and his colleagues plan to continue using their apparatus to explore cellular TBI. In the future they intend to use more complex culture media in order to better simulate the differing tissue structures in the brain. They are also interested in using their device to evaluate possible therapeutic measures.

“The nice thing is we have a very well-controlled system to cause injury that can also be used to evaluate therapeutic interventions,” Franck said. “We can inject drugs into the culture, for example, and see how the cells respond.”

Franck hopes that the results from these kinds of lab studies will eventually guide clinical research aimed at reducing the devastating effects of TBI.